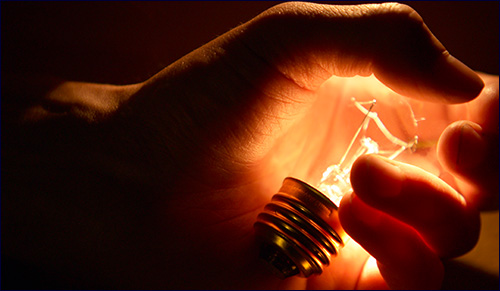 4 positive responses when you find yourself submerged in physical or spiritual darkness.

Living in South Africa, we have most 21st century conveniences like high-speed internet, running water and electricity, despite the abhorrent government services and rampant corruption. But recently, due to a gross lack of resource planning and foresight, our national power grid has been unable to provide sufficient electricity for the country. The result is both unplanned and planned load-shedding where power is suspended for hours on end. The resulting darkness is annoying, frustrating and damaging.

Likewise, the Jewish world has been experiencing times of darkness. From the kidnapping and murder of our three boys, to the dozens of soldiers who died in Operation Protective Edge and the most recent Har Nof massacre, our collective psyche is reeling from pain and loss.

We can learn from the varied responses to both situations, when physical light is taken away and when our spiritual world feels dark and gloomy.

When the blackouts began, my neighbor didn’t waste time complaining. She went straight to the camping store and bought a small gas stove and emergency lights. When the next blackout hit, she was all ready to tackle it. She wasn’t afraid or paralyzed by the inconvenience. She had the resources she needed in order to ride out the wave until the power returned.

The modern-day spiritual champion Rachelle Fraenkel astounded Jews around the world with her response to her son’s kidnapping and murder. She became an icon of extraordinary strength and inspiration. Yet her strength did not instantaneously appear when the tragedy occurred. I have no doubt that years of Torah study, prayer, and developing a deep relationship with God enabled her to respond so transcendentally and other-worldly. She had built up the inner resources during the good times to be able to handle the challenging times.

When my power goes off, it’s easy to get angry. How dare they do this to me? I pay so much tax and this is the service I deserve? Yet the lack of power also reminds me of how lucky I am 98% of the time. I have the luxury of a hot water and electricity while millions of people worldwide do not have these conveniences. Their temporary absence reminds me to be grateful for when they are present.

When my teacher Rebbetzin Tziporah Heller’s son-in-law was injured in the Har Nof attack, her response was astonishing. She was full of gratitude for the miracles which took place. This no doubt resulted from a lifetime of cultivating a world view with God and His kindness at the center.

When there are power cuts, it does not matter who you are. A wealthy businessman and a simple laborer are subjected to the same reality. The walls we build around ourselves are suddenly irrelevant.

When the tragedies occurred, political ideologies, religious outlooks and cultural differences became irrelevant. The funerals and shiva homes were inundated with Jews of every variety to offer comfort to the families. We appreciate that we are one family.

Our challenge is to remember that we are all unique and important part of the Jewish people and to love each other like family constantly– not just when tragedies occur.

4. Use the darkness to bring light

When I dropped my daughter at school, I complained to a friend about the power cut which we experienced the night before. “Oh,” she said with a smile, “we had the most wonderful candle-lit dinner. It was so beautiful.”

While none of the wives of those tragically murdered in Har Nof would have chosen this reality, they responded with a profound awareness that darkness is not the end of the road. They implored each Jew to reach out to each other and spread love and kindness.

In these days leading up to Hannukah, may the Jewish people receive the spiritual light that we so desperately need. May we learn from the remarkable courage and faith that we see around us, and choose to bring light into our world whenever we can.

After the Cancer Diagnosis

Reach Out for Help

CPR for the Jewish Soul
Korach 5782: Visit to Lift the Spirit
That Time The Ivy League Found A Way To Limit Jewish Enrollment
Would You Rather Be Right or Happy?
Comments
MOST POPULAR IN Spirituality
Our privacy policy

Korach 5782: Visit to Lift the Spirit
That Time The Ivy League Found A Way To Limit Jewish Enrollment
Would You Rather Be Right or Happy?
Korach’s Unique Punishment
Who Was Josephus? The Controversial Backstory of the Famed Historian
Should I Break Up, Get Engaged or Keep Dating?
Time Is Your Precious Commodity
Can a Moral Truth Ever Change?
The Abortionist of Auschwitz
Manischewitz Jello Mold Recipe
1 2 3 … 2,948 Next »