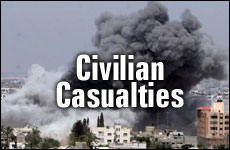 Jews and the ethics of war.

The difference between the terrorist attacks and the Israeli retaliation is that the terrorists deliberately aimed for civilian centers seeking to kill innocent people whereas Israeli planes dropped leaflets encouraging residents to vacate the area of their intended targets. The terrorists seek out innocents, Israel works to save them, but every so often a target is missed and an innocent civilian is killed.

The death of an innocent is tragic. The heart trembles at the sight of little children, bodies broken and lives snuffed out. The Israeli military doesn’t target women and children, but their death is an inescapable consequence of military action. There is no way to ensure the safety of civilians when the theater of war is a crowded city. Surely responsibility lies with the enemy who fights from behind cradle and skirt, but the question remains, is it ethical for an army to pursue a war in the presence of an innocent population?

Our hearts demand that we stop such wars, but our heads tell us that withdrawal would enable the terrorists to terrorize with impunity. We are torn between duty and empathy, compassion for our children and compassion for the enemies’ children. What to do?

We are not the first to worry about casualties in war. When Jacob was informed that Esau had raised an army and was marching against him, he feared and he worried. Our sages explained that he feared for his own life, but he worried about being forced into a war that would require him to take another’s life.2

Rabbinical commentary on this explanation abounds, but most agree that Jacob was not concerned with taking Esau’s life. Esau had forfeited his right to life by marching against his brother. Talmudic law is clear on this point, if someone rises against you, rise up and kill him first. If you threaten the life of another you forfeit your own right to life. Jacob was concerned about collateral damage. He worried that others might be killed in the heat of battle.3

That he worried tells us that our heritage bleeds for the loss of innocent life. That this concern did not deter him from preparing for war tells us that notwithstanding the horror of civilian casualties we must take up arms when war is foisted upon us. Otherwise, our own children are at risk.

This is not to say that enemy civilians are fair game in war. Those who don’t offer the enemy aid and succor are not our enemies and we must make every effort to spare them, but there is no religious or legal statute in the world that prohibits military activity likely to result in unintended, unavoidable and unforeseeable civilian casualties. That would render every war effort including defensive ones obsolete.4

In peacetime, the causation of collateral damage is a murderous and prosecutable offense. For example, we have peacetime license to kill those who pursue us with deadly intent, but we have no license to cause collateral damage by killing the innocent human shields behind whom the pursuer ducks.5 But wartime conditions are different; they don’t allow for peacetime luxury. If war could only be prosecuted with guarantees against civilian casualties, no country would be able to defend itself in time of war and all aggression would de facto be rewarded. The laws of war are not derived from the peacetime law of the pursuer, which is why Jacob went to war despite his vehement distaste.6

Abraham, whose heart melted with love at the sight of a stranger, went to war against a coalition of four countries to save his nephew Lot. When he returned from the war God appeared to him and said, “Fear not Abraham, I shall protect you, your reward is exceedingly great.” Our sages taught that Abraham feared that he had forfeited his virtue by prosecuting the war. He knew he was right to save Lot, but was he right to save him at the expense of human life?7

Abraham took this even further than Jacob. Jacob was only worried about killing innocent bystanders, Abraham worried about killing the enemy’s soldiers and God had to comfort and reassure him. Those whom you killed, God said, deserved to be killed. They forfeited their lives when they took up arms against Lot.8 As our sages put it, they are thorns in the king’s garden, the king would have hired laborers to weed out the thorns, now that you did it for him, you need not worry. On the contrary, your reward is exceedingly great for you saved the victim from their abusers.

Abraham was the first Jew to take up arms in a just cause. It broke his heart to do so and when he returned from war he mourned the loss of his innocence. He was devastated by what his enemies had made of him.

Today, the Vatican seeks to teach us moral values by admonishing Israel for killing babies.9 Cardinal Ravasi ought to remember who he is talking to. Jews are the people of the book, who taught the world about sanctity of life. To the Jew, every life is precious, even the lives of our enemies.

Jews don’t perpetuate war because life holds no value. Jews perpetuate war precisely because life has value and must be protected. When war is foisted on us, we cry every time our enemies make killers of us. Abraham was devastated by the death of his enemy. Jacob worried about killing innocents. Yet, when war was foisted upon them, they sprang into action without hesitation. God endorsed their actions even as He understood their concerns. “Fear not Abraham, I shall be your shield.”

We too tremble when life is lost on either side of war. Sadly, Jews know grief better than any other nation; we know what it means to lose a loved one. It is not for lack of love that we undertake war, but in spite of love. War is not pursued with intent to kill, but with intent to save. We don’t undertake war to kill innocents or even combatants. We undertake war to reduce bloodshed on all sides.

Rabbi Lazer Gurkow is the rabbi for the Beth Tefilah Congregation in London Ontario.

What American Jews Can Learn from the Muslim Community