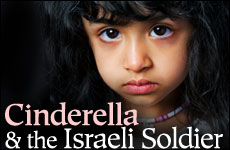 A glimpse of life in Israel you don’t get to hear in the mainstream media.

Arriving in Akko early one spring morning, an elite IDF paratrooper unit started exploring the narrow stone streets of this ancient seaport. As part of their rigorous training, they need to learn how to navigate in an urban environment. So they found themselves in Akko, a city in which Arabs, Jews and Christians all manage to reside together. The old city walls that surround the port are remnants from the Crusader period.

Divided into groups, the paratroopers glanced around to get their bearings. Though alike in their olive-green uniforms, with their M16's casually dangling down their backs, one soldier stood out from the rest of his comrades. His name was Dov, "bear" in Hebrew. At six foot four, wide shoulders and bulging muscles strained against the fabric of his extra-large uniform, it was a most appropriate name. Yet Dov was always cheerful, kind-hearted and popular with his fellow soldiers.

Just then a group of young Arab schoolchildren hurried past, chattering rapidly to one another.

"I wonder what they're saying?" Yair, one of the soldiers, commented.

"They said if they're late for school, they will be in trouble," Dov replied.

"Since when do you know Arabic?" Tali laughed.

"I learned it in school, just like you did," Dov told him.

"Okay, if you know Arabic so well, go talk to one of those school kids," Tali challenged, "and we'll listen into your conversation."

He noticed one tiny girl trailing slightly behind the rest of the schoolchildren. She must have been about five but small for her age, with olive skin and short black hair. A fragile little sparrow of a girl, but she had spunk. When this enormous Israeli soldier with an M16 squatted down in front of her, she was unperturbed. Her dark-bright eyes looked directly into his hazel ones.

"Hello, cutie, how are you today? My name is Dov. What's your name?" he asked in fluent Arabic, using a soft, friendly tone.

The child smiled but did not reply.

"Let me guess your name then. Is it Fatima?"

The little girl shook her head.

"Could it be maybe, Hanan?"

Dov's knowledge of female Arabic names was exhausted. "I give up!" he exclaimed.

"My name is Cinderella," the child announced proudly.

Dov laughed. "You're joking! Is your name really Cinderella?"

"Well, Cinderella, it was nice talking to you. Have a good day at school."

Dov unfolded himself back to his towering height. The child scampered off down the narrow stone street.

"Well, what do you have to say?" Dov turned to his friends with a smug smile. "Now do you believe I can speak Arabic?"

"I guess you do," Tali reluctantly admitted.

"Yeah, but you spoke only to a little kid. How hard was that?" Yair challenged.

But Dov was still following Cinderella with his eyes. Perhaps she sensed he was watching her for suddenly she turned around, gave a quick grin and a wave of her small hand, whirled round again and smashed her head into a stone wall. She cried out in pain and in an instant Dov was beside her. He scooped her up, examined the bump on her forehead, and gently wiped away her tears with his huge hand.

"Cinderella, don’t cry," he murmured comfortingly. "It's a big bump but it will feel better soon. I wish I had some ice to put on it. That's what my mom did for my bumps when I was a little kid."

Cinderella sniffed. "You bumped your head too?" she asked wonderingly.

Dov laughed. "Sure, my head may be big but I still get my share of bumps. We all do. Tell me, would a candy help your head feel better?" he asked, fishing inside his uniform pocket and offering her the sweet.

She nodded, blinking away her tears, and popped the candy into her mouth.

"Now tell me where your school is, Cinderella, and I’ll take you there."

She pointed with a tiny finger. "Down that street."

Both were unaware how incongruous they looked. But at that moment, it did not matter.

So Dov, the huge Israeli soldier with the M16 on his back and compassion in his eyes, gently carried his new little friend right to the gate of her school. Both were unaware how incongruous they looked. But at that moment, it did not matter. At school, Cinderella may be taught to hate the man who had so tenderly carried her there, but perhaps she will remember him with fondness, as he will remember her…

The media was totally unaware of this event. CNN was not there to record it, British reporters did not witness the sight.

But this story did come from a very reliable source – my own soldier son, Tali, who was there to witness this encounter in ancient Akko early that spring morning.

Israel Snapshot
Vegetarian Stuffed Peppers
Lessons from the Book of Jonah
Where Are We? The Body, Brain, Soul Problem
Comments
MOST POPULAR IN Israel
Our privacy policy
Aish.com Is Looking for Great Writers