A Jewish stew that comes in many flavors and styles.

Known by many different names in the world's Jewish communities, chollent is nonetheless the dish that is universally to the Sabbath. If you've never seen or tasted one, the best description is: a Jewish stew that comes in many flavors and styles.

Since cooking is prohibited on Shabbat, but hot food is appropriate, some dish had to be devised that could be left to simmer on a covered fire or hot plate, untouched from before sunset on Friday until the following day, when it is usually served for "lunch."

It became a matter of principle to serve hot food at Shabbat midday in the time of the Sadducees some two thousand years ago. Seeking to differ from the God-given interpretation of the Torah in our Oral tradition, they redefined the verse "You shall kindle no fire... on the Sabbath day," to mean that no fires might burn at all (even if kindled before the Sabbath).

So, while the Sadducees sat in darkness, partaking of cold foods, loyal Jews filled their homes with light each Sabbath eve and prepared dishes to be kept warm so that Shabbat might be enjoyed in the manner intended by the Creator.

Note: To avoid the prohibition against cooking on Shabbat, your chollent should be fully cooked before candle-lighting, and placed on a “blech.” (See more )

In large pot, brown the sugar in oil. Immediately add 1 cup water. Peel and cut potatoes into chunks and add to water. Rinse beans and barley and add to pot. Add remaining ingredients. Add water just to cover mixture. Bring to a boil. Cook covered on a low flame for 1-2 hours. Add water to cover and bring to boil. Place on covered fire before Shabbat and keep close to flame overnight but not directly over it. It should simmer gently. Serves 6-10.

Slice onions. Fry in a little oil until golden brown. Add pieces of chicken and cook until the skin browns (about 10 minutes). Add potatoes, peeled or unpeeled, cut in large pieces. Add beans and barley. Add water to cover, plus 1 additional cup and cook for at least 1 hour. Before putting the chollent on a covered fire, add another cup of water. Cover chollent and keep it on a low-medium covered flame.

Variation: For extra Shabbat flavor, add kneidlach and some additional water after you have cooked the chollent for 1/2 hour.

Saute onion in oil in pot until soft, then add rest of ingredients with water to cover. Bring to a boil and cook for at least 1 hour, adding water as needed to keep a soupy consistency. Place chollent on covered fire.

1. Add kishke and simmer 20 minutes before putting on covered fire.

2. Chunks of meat substitute may be added for extra texture and to make it more interesting.

3. Well-washed raw eggs may be carefully immersed in the chollent before putting it on the covered flame. At serving time, remove eggs and peel. They turn brown. Serve them separately.

Shred vegetables. Add remaining ingredients and mix well. Form into a loaf, wrap in aluminum foil. Roast with chicken or place directly into boiling chollent for at least 1 hour before Shabbat. Let it remain in chollent on covered fire until serving the next day. Freezes well raw. A few loaves may be prepared in advance and frozen in aluminum foil.

Recipes from "Taste of Shabbos: The Complete Cookbook" - by the Aish HaTorah Women's Organization.

Shabbat in One Hour (Or So)6 min read 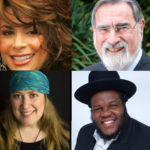 Why Seven Is Holy5 min read

How To Be a Good Shabbat Guest4 min read