Bringing Children to a Funeral 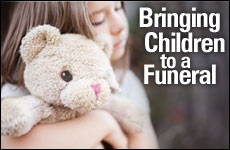 Was I wrong to bring our 10-year-old daughter to her grandfather's funeral?

Last week my father-in-law passed away. Our 10-year-old daughter asked if she could attend the funeral and my husband and I didn't know what to do.

On the one hand, our daughter was very close to her zaidie whom she would visit at least once a week. As we live only three short blocks from his home, she would often walk over by herself just to say hello.

Two months prior to his passing, my father-in-law was hospitalized. From then on, she had no contact with him, even though she repeatedly asked to visit him, because the hospital did not allow children onto his floor and he was too weak to speak on the phone. So it seemed only right to allow her to come.

On the other hand, she had never attended a funeral before and we were not sure if she would be able to handle it. We had no one to ask about this and had to decide quickly. With much ambivalence, in the end, we decided to let her attend.

Three days later, when I was in my father-in-law's kitchen preparing lunch for the mourners, one of my sisters-in-law came in and scolded me for having brought our daughter. "Children have no place at a funeral," she said. "You should have known better. This could have been traumatic for her. That was an irresponsible thing for you to do."

Now I'm not sure we made the correct decision. Even though our daughter seems to have dealt with the whole thing quite well, I would very much like to hear your views on bringing children to a funeral. Do you agree with my sister-in-law that we acted irresponsibly? What would you have recommended if we had consulted with you?

I believe that you acted correctly. Don't let someone else's unjustified criticism undermine your confidence in your own judgment.

For the sake of others who may find themselves, God forbid, in a similar predicament, let me share the following guidelines I used to arrive at my assessment of your decision.

All children do not have the same level of maturity. Ask any elementary school teacher or rebbi and they will confirm this fact of life. Some children are immature, acting more like children who are chronologically much younger. Other children, however, display an emotional maturity comparable to children much older.

Age should not be the deciding factor; more important is the child's emotional maturity.

When assessing whether or not a child is "old enough" for anything, the age of the child should not be the deciding factor. What is more important is the child's emotional maturity.

When it comes to deciding, therefore, whether or not to allow a child to attend a funeral, there can be no fixed age limits or cutoff point. The decision, then, must be based on an individualized assessment of the motivation and coping skills of that child.

Regarding the motivation, the question must always be asked, "Whose desire is it that this child should attend the funeral?" If relatives of the child would like the child to be present, that is not sufficient justification. The needs of the child should always supersede the wishes of any adult.

In your case, it was your daughter's wish to attend the funeral of her zaidie. And there appears to have been good reason for her to want to do so. As she was denied access to him during his final illness, her presence at the funeral could help her bring closure to the obviously fond relationship she had with this important person in her life.

The coping skills are more difficult to assess. In order to do that fully, one must take into consideration how the child has dealt with potentially stressful experiences in the past. Does this child shy away from anything which could be frightening, unpleasant or even gruesome? If so, then this child may not be ready to attend his or her first funeral.

If, on the other hand, this child has demonstrated an ability to maintain his or her emotional equilibrium in potentially stressful situations, then he or she may be able to handle the experience of attending a funeral.

In your case, the fact that your daughter asked to see her grandfather in the hospital indicates that she may not be so squeamish as to fear a hospital visit. If so, then she may have already demonstrated a higher level of maturity.

Perhaps the best method of measuring children's emotional maturity level and coping skills is to describe in detail what actually happens at a funeral. Do not sugarcoat it for them. And do not exaggerate it, either. Simply walk them through what they will see and what they can expect to hear. Tell them that people will be crying, some uncontrollably. Tell them how long it will take. And tell them that they may leave at any time if they feel it is too much for them.

After giving them this orientation, ask them if that is what they thought happens at a funeral. Do they still want to attend? If the answer is "yes," and they have managed well in the past in potentially stressful situations, then you should allow a child to attend the funeral of a close relative.

Returning to your original questions, I believe you acted correctly and responsibly in allowing your daughter to attend her zaidie's funeral. And the only mistake you made was allowing your sister-in-law's misguided condemnation to undermine your trust in your own good judgment.

From your letter, there was no indication whether your sister-in-law was a daughter of the deceased, a daughter-in-law, or related to you from the other side of your family. If she was a daughter and therefore one of the mourners, her response to you may need to be viewed in light of the pain of her loss. If she was not a mourner but only a daughter-in-law like yourself, I wonder how she handled the question of funeral attendance with her own children. Did she not allow them to attend and later regretted her decision? Was she feeling guilty and needing to attack you to make herself feel better? Perhaps she saw your decision as showing her up in some way?

Regardless of your sister-in-law's motives, you could have responded to her in a non-confrontational manner. For example, you could have said, "I believe that parents should decide on a case-by-case basis what is in the best interest of each child. My husband and I carefully deliberated with each other and concluded that she should be allowed to attend. Had you participated in our discussion, I'm sure you would have agreed that we did act responsibly."

6 Gifts I've Given Myself as a Mother

My Son, The Artist