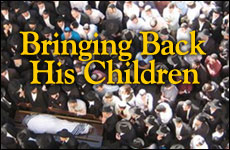 We just heard the shattering news only a few minutes ago. Our tears haven't dried. A bus will bring the yeshiva to his levaya. We are all his talmidim (students). Without him I might never have changed my life.

He dared to dream a dream that no one believed possible. A man of vision is not afraid to stand alone. For such a long time he was alone. Few encouraged him. Today even those who opposed him try to take credit for the revolution that he started.

He taught us what it takes to be happy. Could someone rise above moods, doubts, disappointments and depression? Only if he was in totality connected with Hashem; only if he was constantly aware how much Hashem loves him; only if he is cognizant of his task in life and how much of an opportunity life gives every person to fulfill that task.

Rav Noach spoke always with such clarity and logic. At the same time, he spoke with his heart and with his total being. Few people can do this, but fewer can talk to you in such a way that you feel that there is no one else in the world besides you. You feel that you are the world and Rav Noach was uplifting you so that you can see your potential to make the right choice. It wasn't a science, it was an art.

Because the Rosh Yeshiva gave his life for Hashem and Klal Yisrael, he lived every moment of it. He personified the happiness that he taught. To quote the memorable article from Rolling Stone, "Rav Noach reminded me of God, the Father in His more jovial aspect."

In a world saturated with apathy and lethargy, Rav Noach woke us up.

Some people are worthy of creating yeshivas -- Rav Noach created a movement and changed Jewish life. Some Rosh Yeshivas are worthy of making talmidim. Rav Noach made an army as well. In a world saturated with apathy and lethargy, Rav Noach woke us up.

The Ponovezher Rav, zt"l told a story to the assembly of Gedolim, great rabbis, before the outbreak of World War II and the Holocaust. There was a terrible fire in the house of Reb Yossele. The entire shtetl was there to try to put it out in the middle of the night. Suddenly someone realized that Reb Yossele was still inside sleeping. They started to argue what was the best way to reach him. One said to break through the side of the house. Another said through a window in the roof which flames had not yet reached. Finally someone said you have to scream and wake Yossele so that he can save himself. The Ponovezher Rav said that we have to scream and wake up our people -- to cry to the Almighty and save ourselves. Rav Noach in our generation was the one who had the vision and guts to cry that we are being engulfed by the fire of assimilation. But he even did more than the parable. He ran into the flame engulfed house to find forgotten Jews and save them.

When Eliyahu Hanavi ascended to the Heavens, his talmid Elisha was told that he could ask for anything if he would see his Rebbe go up to Heaven in the chariot.
He asked for twice his Rebbe's power. Rav Noach's father in a famous letter to Sara Schneirer asked the question, "Why does a talmid ask for twice the power of his Rebbe?" He answered that in a world without Eliyahu Hanavi you need twice his greatness to survive and succeed.

What are we to do now without our Rebbe? We have to ask Hashem also to give us twice the strength and ability we've had until now to do our task in a world without Rav Noach. If we devote ourselves with twice the determination, there is no doubt that Hashem will hear our plea. The edifice he built must stand strong. Aish HaTorah and all the outreach yeshivas (Neveh among them) must continue to bring Hashem's children home.

Rav Noach zt"l often asked, "What can man possibly give to the Almighty? The Almighty is infinite. He lacks nothing." After a pause, in hopes that we are thinking, Rebbe would say, "We can give him back his children. We can bring His children home."

Rav Noach's work is not finished. Without doubt he will go to Hashem and tell Hashem, "I did my share. I bought tens of thousands of Your children home. But now Father, You must bring Your children home. Home to the Bais HaMikdash and the Final Redemption."

My Uncle, the Rosh Yeshiva