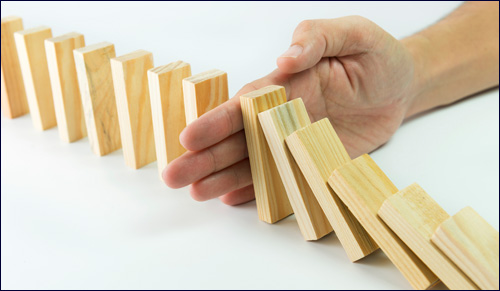 Don’t let the past rule your response to the present.

Arguments occur in every marriage and quite often reflect a deeper discord of underlying issues. The cause of conflict may be simple. For example, Rick leaves his socks on the floor even though Sara repeatedly asks him not to. But a bigger piece of the puzzle is the meaning Sara gives to what just happened. This is known as the 90/10 principle: 10% of the problem is in the here and now, while 90% is based on past associations and experiences. Those socks are a trigger point.

10% of the problem is in the here and now, while 90% is based on past associations and experiences.

Jake is looking at his cellphone while Rachel is talking to him and she gets upset, angry and withdraws. Rachel’s sharp, critical comments to Jake make him feel emasculated and disempowered, so he stays at work later. Although many women feel irritated when their husband’s attention is elsewhere, for Rachel it is particularly painful because her mother was emotionally cut off and not available to listen to her. Jake is deeply affected by Rachel’s criticism because his mother was controlling and domineering.

Allie doesn’t follow through on practical stuff which she promised to do, and this upsets Steve. He feels let down and alone, and becomes distant and sighs heavily. This causes Allie to feel resentful and despondent. Steve’s father was kind but unreliable; Allie’s behavior makes Steve feel insecure and anxious. She comes from a family where emotions were not clearly expressed, so Steve’s sighing is threatening to her. Allie and Steve’s responses to each other are amplified by their previous relationship experiences.

Every relationship has its negative cycles and sore points where partners hurt each other. In these examples and with so many couples I’ve worked with, the parallels between current difficulties and past dynamics are remarkably apparent.

What is behind this dynamic? Why don’t we choose a more effective, updated response?

According to Imago Relationship theory, we unconsciously choose the same type of relationship challenge, firstly because it feels familiar, but also because we actually seek to work through the original problem. We can only do this by being in the difficulty again and finding our way out of it, by transforming the hurting relationship into a healing one.

So how do we break out of the negative cycle? Here are some ideas, at the risk of over-simplifying.

Try to identify or become conscious of your own sensitivity and where it comes from. In this way you will take responsibility for your part of the problem and not put it all on your partner, even though the difficulty exists in the relationship also.

Look at how your behavior or response fuels the negative cycle.

See the cycle as having its own life story. This will reduce the blame.

Try moving away from the ‘who started it’ cycle. It really doesn’t matter and generally it’s a chicken/egg story.

Try seeing the problem in less global or all-or-nothing terms.

Try discussing the issue in a less emotional, accusatory way. Try to gain some perspective on the problem, including your own part in it instead of attacking your partner.

Keep in mind that your spouse has his or her own emotional reality which is also valid, even if it is different to yours.

You may not reach complete agreement but you can attempt to be genuinely interested in your partner’s experience.

Hold onto your own truth even if your partner tries to invalidate it.

Instead of trying to be right, try to share, listen, and understand. View yourself as two parts of a whole which can complement and work together rather than as one having to be valid and true.

Sometimes professional help is needed to help identify the negative cycle and untangle the knots of which actions, thoughts and words triggered off which responses. This can be an intricate, fascinating and potentially extremely rewarding and growing experience!

May we merit to constantly grow in understanding ourselves and our partners and create a closer relationship.

Jenny completed her BA in English and Psychology and then qualified as a Social Worker. She was the  Clinical Director of the Johannesburg Parent and Child Counselling Centre before making Aliyah in 2013.  She has run parenting groups, trained in Counselling skills and worked with trauma and bereavement.  She more recently trained in Imago Couple Counselling through Imago Africa. She currently runs a  private practice for adults and couples in Ramat Beit Shemesh and on Skype. Her main passion is in  empowering individuals to grow emotionally and spiritually through life’s challenges and in helping  couples to find connection and healing in their relationship. She feels very blessed to be living with her  husband, children and grandchildren in Ramat Beit Shemesh, Israel. She has written articles for  Connections magazine in Beit Shemesh. She may be contacted at ; jenny@ohr.co.za.

Marital Survival Guide: From I to L

The Top 17 Pieces of Marital Advice