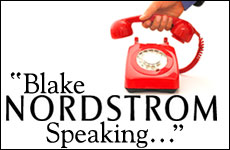 Seattle resident Sarah Busch was chagrined when she opened her monthly Nordstrom statement. Instead of the concise, compact statement she had been receiving for decades, the 79-year-old retired bookkeeper unfolded a bulky 8 X 10 statement in a new format. She decided to complain.

She phoned Nordstrom's corporate headquarters right there in Seattle and asked to speak to someone in management. "Don't give me Customer Service," she instructed the operator. After a few rings, a masculine voice answered the phone. "First of all, I'd like to know to whom I'm speaking," Sarah Busch began.

"This is Blake Nordstrom," came the reply.

"Blake Nordstrom? You're the President!" a confounded Sarah Busch exclaimed.

"I am indeed," he responded.

"What are YOU doing answering the phone?"

"Well," Mr. Nordstrom explained in a bemused tone, "I was sitting here at my desk, and the phone rang, so I picked it up."

"You crack me up!" Mrs. Busch declared. She proceeded to tell Mr. Nordstrom that she had been a loyal customer since Nordstrom was nothing but a shoe store in downtown Seattle. "I still have the first credit card you issued when you merged with Best Apparel in 1963. It's all worn out and expired, but I keep it as a memento."

The corporate president and the retired bookkeeper enjoyed a convivial conversation for about ten minutes, with Sarah Busch not forgetting to lodge her complaint about the new format of the monthly statement.

Two days later, she received a letter from Blake Nordstrom. Enclosed was a shiny new replica of her antiquated Nordstrom/Best credit card, obviously fabricated just for her. Mr. Nordstrom thought she would get a kick out of it, and indeed she did.

She called Blake (by now they were on first-name basis) to thank him. "Next time you're downtown," he invited her, "come up to the 6th floor to say, ‘hello.'"

A week later, a young rabbi's wife mentioned to Mrs. Busch that she had encountered some trouble while shopping at a local Nordstrom branch. "No problem," Mrs. Busch responded, to the young woman's surprise. "Give me the specifics, and I'll tell my friend Blake Nordstrom about it."

The next day, Sarah Busch presented herself at the president's office. "Mr. Nordstrom is in a meeting," his secretary said politely. "He'll be finished in about an hour."

"Fine," the septuagenarian replied. "I'll do some errands and come back."

An hour later, she had the concierge phone from the first floor to see if Mr. Nordstrom was now available. The response she got was that she needn't bother to come upstairs. Blake Nordstrom would come down to her.

She was standing with her back to the elevator when she heard a booming voice, "Is this the famous Sarah Busch?" She turned to see a very tall, 40-something man with a wide smile approaching her. Blake Nordstrom greeted the short, elderly Jewish woman like a beloved relative. And, of course, he promised to look into her young friend's problem.

WAITING FOR YOUR CALL

This is a true story (related to me by Sarah Busch herself), and it is also a staggering metaphor. When we pray, how many of us actually expect that the Big Boss Himself will pick up the line? How many of us expect that God actually wants a personal relationship with us?

When we receive a gift (such as every day of life), how often do we appreciate that the Almighty fabricated it just for us, because He wants us to enjoy it? How heedless are we of the invitation to "come up," in order to forge a relationship with the Divine? When things go wrong, do we actually feel that we have God's ear? How little do we perceive that the Master of the Universe "comes down" to us? And while we may be insignificant in our own eyes, can we believe that to our Creator we are on par with "the famous Sarah Busch" -- i.e. worthy of Divine attention and affection?

The more we perceive God in our lives, the more God reveals Himself to us.

As any lactation consultant will assure a new mother, the more the baby nurses, the more milk will be produced. Similarly, the more we perceive God in our lives, the more God reveals Himself to us. And the opposite is also true: the more we attribute what comes our way to "chance" and the blind workings of nature, the more hidden and apparently absent God is from our lives.

Rabbi David Aaron had a student who became observant and was to be married in Jerusalem. The student's anti-religious mother came for the wedding. When she was introduced to Rabbi Aaron, she vociferously expressed her atheistic convictions, expecting the rabbi to try to refute her views. Instead, Rabbi Aaron replied, "If you want to live in a Godless world, then that's the world you'll live in."

The loss was hers. And every time we opt for a Godless day, hour, or incident, the loss is ours.

On the other hand, when we recognize that we are never alone, that the Creator loves us and wants a relationship with us, that He is, as it were, "sitting at His desk waiting for the phone to ring," then we live in a God-filled, light-filled, love-filled world. Then, even when things go wrong, we know we can depend on the Boss to listen to our plight. (Remember that Blake Nordstrom did not change the new billing format in response to Sarah Busch's complaint, but he did forge an unlikely relationship with her.)

The day I left Israel for my recent American lecture tour was utterly hectic. Scheduled to speak in 17 cities, I had dozens of logistical details to attend to. Since my plane was due to land at JFK at 5:30 AM, I had told my cousin in Cedarhurst that I would take a taxi to her house. I had carefully calculated that the $90 in American dollars I had put aside in my bedroom drawer months ago for this trip would suffice for my taxi fare and other expenses upon arrival in the United States. As I rushed around Jerusalem, I purposely disposed of all my Israeli shekels so I wouldn't have to carry them around in the United States.

Sitting at the gate in the Tel Aviv airport waiting to board my plane, I suddenly realized that I had forgotten to take along the American dollars. I was embarking on international travel with no money whatsoever in my purse.

God would take care of me. How did I know? Because that's what He's been doing all my life.

My first reaction was exasperated self-reproach: How could I have forgotten something so important? Then I felt a surge of reassurance: God would take care of me. How did I know? Because that's what He's been doing all my life. In fact, that's high up on God's job description: He takes care of human beings 24/7 -- the circulation system, the nervous system, the endocrine system, etc. That's what He does; He takes care of us. After all, He is the President of the whole universe.

Confident that God would get me out of this mess, I got up and walked toward the drinking fountain. In the corridor, a woman stopped me. "Aren't you Sara Rigler?" she asked. "I heard you speak last June in America."

We conversed for several minutes. It turned out that she and I were on the same flight. "Where are you going in the States?" she asked.

"My first speaking engagement is in Woodmere," I replied. "From the airport I'm going to my cousin's house in Cedarhurst."

"How are you getting there?" she asked.

"I'm not sure," was my truthful reply.

"Well, I live in Cedarhurst," she said. "I'm traveling with my husband and daughter. My son is coming to pick us up. If he brings the van, there'll be enough room for you, too. We can give you a ride."

Her son did indeed come with the van, and it turned out that they lived just a couple hundred meters from my cousin's house. I didn't need taxi fare after all.

The Kotzker Rebbe's famous aphorism proved true yet again: "Where does God dwell? Wherever you let Him in."

Rabbi Yitzi Hurwitz is Lighting Up the World

My Encounter with Hemingway