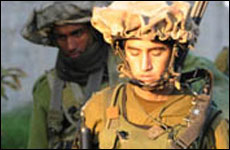 My summer with Israeli soldiers confronted my fear of living.

It was the summer after my junior year of college. After a grueling year of too many sleepless nights in the library I wanted a break. An intense outdoor tour in Israel fit the bill. We rappelled down stunning waterfalls and went scuba diving in Eilat. We hiked rugged cliffs at sunrise and slept underneath the star-drenched, desert sky. At the end of the program, a friend of mine asked me if I wanted to join her in the Volunteers for the IDF three-week session. College didn’t begin for another month, and it sounded interesting. So I changed my ticket and soon found myself at an army base in the North of Israel.

We were given army uniforms that were way too big on us and metal canteens with green canvas holders. Taking photos in front of our army barracks we laughed at how absurd we looked, like children in costumes. We ate in the same cafeteria as the soldiers, and woke up at 4:30am with the army megaphone blaring some incomprehensible message across the still dark mountaintop. While the soldiers jumped into jeeps and convoys headed to unknown destinations, we climbed onto the volunteer bus to a site where we built barricades for the army. We tied wires for the infrastructure and poured cement underneath the sweltering sun.

One morning I didn’t drink enough water and found myself in the army infirmary being treated for dehydration. I remember the army medic saying: “At beseder. You are fine. Hakol beseder. Everything is fine.” And after recovering for a few minutes in the air conditioned building, I walked out into the glaring haze of midafternoon and felt the words following me back to the barricades. Hakol beseder.

At the meals we were starving. I ate slices and slices of bread with tomatoes and cucumbers. I said the customary, Jewish blessings before and after the meals, and on the third day of the program the commander of the army base sat down across from me.

“Are you religious?” he asked me in Hebrew.

I nodded. He seemed confused by this.

“My grandparents were religious, but I’m not. I believe in God though,” he said looking up towards the ceiling.

I stared at the medals on his shirt. He shifted the beret on his head to the side before he stood up. “It’s good that you say thank You when you eat. The army needs a rabbanit. You can be the rabbanit from America. Pray for us, beseder?” And he walked away.

I prayed on those dark mornings before the sun began to rise. I found the tiny synagogue on the base, and I stood there in my oversized army uniform and still searching soul. I said the prayers that were engraved so deeply into my memory I hardly needed the worn, brown leather siddur in my hands. I thought of the army medic’s voice full of faith. Hakol beseder. And the commander’s eyes as he spoke of his grandparents.

One morning I bumped into the commander as I was leaving the shul. “Did you say Shema Yisrael?” he asked me. “Because that’s what I know. The Shema. Do you know what the scariest part of being in the army is?”

I watched the soldiers from the window of the bus as we left the base each morning. They were my age. No, they were even younger. They haven’t had a chance yet to sit for endless hours in college libraries. Haven’t had a chance to pray. To grow up. To learn how to not fear carrying guns and missions that were far heavier than young shoulders should ever have to carry.

And in those last weeks of that summer, I thought about my life back in America. My senior year in college. The great list of unknowns that would begin to rise as graduation drew closer. Where to go. What to do. Who I was. Who I wanted to be. It suddenly all seemed so far away and illusory in the silent accusation of the life around me. What really mattered? Was I too afraid to live?

The siren fills my heart as I hear the commander’s voice: Pray for us.

A few years later, I would marry and make aliyah. I would find myself driving on the highway on Yom Hazikaron, Israel Memorial Day, when the siren echoes through the land. And I would stop my car and stand in the bright morning sunshine, looking at the lines of frozen cars, at the people standing with heads turned towards the ground or up to the sky, with tears pouring down faces or expressions that held everything inside, memories fading like the shimmering light on the black asphalt. The faces of soldiers, the faces of children. The siren fills my heart as I hear the commander’s voice from that summer long ago. Pray for us. And I do. I build barricades of prayer in my heart that join the aching, wordless prayers all around me. We cannot be afraid to go on.

The siren seems to echo forever before it disappears into the hills around us. We step back into our cars, wipe away stubborn tears and trust that the One who guards Israel will guard our hearts. Shema Yisrael. That’s what we know, that’s who we are as we turn on our ignitions and drive towards our destinations.