A Taste of Talmud: Delving into a Case Scenario 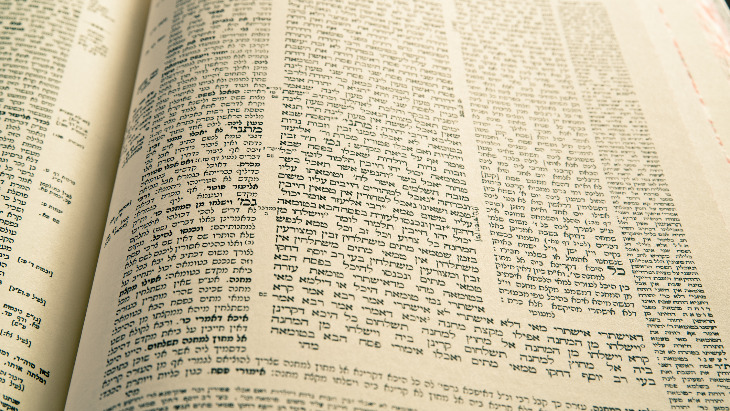 Time to put on your Talmudic thinking caps.

In an interview on Israeli TV the South Korean ambassador, Mr. Young Sam Ma, commented, “We were very curious about the Jews’ outstanding academic achievements. How is it that Jews are such geniuses? The conclusion we reached is that one of your secrets is studying Talmud.”

Here's a taste of Talmudic thinking.

Sarah uses her credit card regularly and with every purchase, she receives a certain number of points towards a selection of rewards. Her friend Kayla occasionally borrows Sarah's card to make her own purchases, and Kayla reimburses her later. Reward points are allotted for Kayla’s purchases as well.

According to Jewish law, does Kayla deserve a share of Sarah’s rewards?

To answer this question, we first have to figure out what is actually happening when Kayla makes a purchase with Sarah’s card. One might say that with every purchase there are really two transactions going on:

If this is the right way to look at it, then all we care about is the second transaction, since the card company is the one giving out the points. So now, who is “purchasing” the credit, Sarah or Kayla?

When Kayla hands over the card, the salesperson will probably do a credit check. On whom?

On Sarah, obviously, since it is her card. If she is “in the black” the sale will go through and she will be charged at the end of the month. Kayla will reimburse Sarah, but if there is any problem, Sarah is the one who will have to deal with it. In fact, the card company does not even know Kayla exists!

One can argue, then, that Sarah is the real credit-purchaser, even when Kayla uses the card. If this is the right way to look at it there is no reason Kayla should receive a share of the bonuses.

But I Also Helped!

On the other hand, you might counter that even if technically Sarah is the real purchaser (in the eyes of the card company), Kayla did cause her to earn the points.

The Talmud says that when a storekeeper gives an errand boy a freebie for making a purchase he must share it with the one who sent him, since it was the sender who caused him to receive it. In the words of the Rabbis the freebie was caused by “this one’s money and that one’s feet.”

Here, too, Kayla caused Sarah to receive the points by making a purchase. That seems to make it a case of “Sarah’s money and Kayla’s feet.” If we look at it this way then Kayla does deserve a share.

There is another way to look at the matter, however. (There always is!)

We asked before who is really making the purchase (of the credit). But there is a more fundamental question we can ask, namely: what is the real transaction? True, a purchase was made. But is that what counts?

Sarah does a lot of things with her card. She uses it to make purchases, to pay her utility bills and take cash from the ATM. She also uses it to extend loans to her friends. How does she do that? By allowing them to use her card to make their own purchases. Of course, the real lender is the card company. Sarah just passes the loans on.

So when Kayla makes a purchase using Sarah’s card what is really happening is that Sarah is taking a loan from the card company and passing it on to Kayla. That is the transaction that matters. The purchase is merely the reason for the loan. It turns out, then, that Sarah alone is making the transaction, namely the taking of the loan, while Kayla is merely the recipient.

Who Cares Who It’s For?

To better understand this conclusion, imagine Sarah buys a new mug to replace one of Kayla’s that she broke last week. In this case although replacing Kayla’s mug is the reason for the purchase, clearly this transaction is being made by Sarah alone.

Similarly in our case, enabling Kayla to buy the blouse may have been the reason Sarah took the loan from the card company (by letting Kayla use her card), but when all is said and done, it was Sarah who took the loan, not Kayla. Therefore, Sarah alone deserves the bonuses.

Just to make sure the principle is perfectly clear, let’s think about a case where the conclusion would be the opposite. Imagine that instead of the card company it was the store that was offering a bonus – “Buy one blouse and get one free.” Here, too, one might think Sarah deserves a share in the freebie, since it was the use of her card that caused Kayla to receive it.

But here again there are really two completely separate transactions going on – one between Sarah and the card company and the other between Kayla and the store:

Just as the taking of the loan is a transaction between Sarah and the card company alone, so is the purchase of the blouse a transaction between Kayla and the store alone. (If Kayla had bought a handgun instead of a blouse it would have been her background that the salesperson checked, not Sarah’s.) So just as Kayla deserves no part of the credit card bonuses, so does Sarah deserve no part of the extra blouse.

This case was taken from a new book by Rabbi Gavriel Rubin, based on the interactive lectures of Rabbi Yitzchak Menachem Karlinsky: The Bomb Thief and Other Curious Cases: Leaves from the Jewish Logic Tree. Available from Amazon in paperback or Kindle. Click here to order.

Rabbi Gavriel Rubin spent his childhood in Stony Brook, NY and his formative years in Stillwater, OK. He received a degree in Anthropology from Stanford University in 1981 and spent time in the community of Rabbi Chaim Lapin in San Jose, CA. Upon graduating he moved to Jerusalem, Israel, where he studied under Rabbi Aharon Feldman, Rabbi Yisrael Zev Gustman and Rabbi Tzvi Kushelevsky. He then taught and tutored at various yeshivos for the next 20 years. After that he embarked in earnest upon his career as a translator/style editor, at one point translating material for Aish HaTorah’s Discovery seminar. Today he delivers a daily daf yomi class on Zoom, while at the same time working on his own books. He is a resident of the Neve Yaakov neighborhood of Jerusalem.