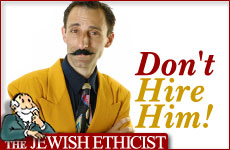 Can I warn my neighbors about a problematic workman they're thinking of hiring?

Q. My neighbor is thinking of hiring a certain workman, but I have heard many people have had a bad experience with this person. Am I allowed to relay this hearsay?

A. There is a very basic problem with relating hearsay. The Torah commands, "Don't go about as a talebearer among your people; don't stand idly by the blood of your neighbor." Many commentators understand that there is an implied contrast: Idle gossip is forbidden; relating details about people's behavior is permitted only if it is necessary to protect someone from harm , to avoid standing idly by as he is subject to harm.

Rabbi Israel Meir HaKohen of Radin, in the classic book Chafetz Chaim, gives instructions on how to balance these two considerations. One of them is that the commandment to protect your neighbor applies only when you have certain knowledge of the potential danger.

For that reason, he writes that when weighing disclosing defamatory information about someone in order to enable them to recover a loss or harm, it is necessary "that he [the teller] should see the thing himself, and not via hearsay from others, unless he was able to afterwards verify that the matter is true."(1)

That would seemingly make it improper for you to relate the information you heard.

However, in a later chapter when Rabbi HaKohen changes the focus of the discussion. Instead of obtaining recompense for past harm, he discusses protecting someone from future harm, for example by hiring a worker who will act dishonestly or making a business deal with a dishonest businessperson. In this later chapter, the condition is stated slightly differently. There he states that "a person should be very careful not to conclude hastily that the consequences will indeed be adverse, rather he should thoroughly consider the matter if indeed it is bad."

In a footnote there, he explains that more discretion is possible in this case. There are basically two considerations at work:

Past vs. future: In the case of past harm, what is done is done. Just as in court some kinds of evidence are admissible and others are not, likewise in the less formal framework of human relations some kinds of knowledge are strong enough to pass along and others are better left unsaid. But when it comes to preventing harm in the future, stronger steps are justified in protecting the victim.

Harm vs. foregone benefit: In the case of relating past harm, the consequence of relating unsubstantiated information may very well be actual harm to the subject of the report. He may end up having to pay a judgment, or losing his job. In the case of warning someone against a problematic employee or partner, there is no active harm. The subject of the report may fail to obtain a positive benefit in the form of a job or a deal, but he is not made worse off than he started. That doesn't mean the harm is not serious; it is. It is definitely slander to make a disclosure that would keep someone from getting a job or closing a deal. But it is less serious than

When it comes to merely preventing a benefit, less concern has to be shown in protecting the subject of the report.

The example given is virtually identical to your case: A person is interested in hiring an employee, and a friend has heard reliable stories that the person has stolen in the past. Rabbi HaKohen relates that under some conditions it is permissible to relay the information. The conditions are:

So this footnote to the Chafetz Chaim has wise instruction about when potentially damaging information may be relayed. But there is also wisdom in relegating this information to a footnote. There is a well-known tendency to exaggerate the degree of lenient rulings and to permit slander far beyond the permitted degree of harm avoidance. So we should all be aware of the conditions when transmitting accurate negative information can be permitted, but we should also be keenly aware of the potential these leniencies have for abuse.

The Jewish Ethicist: Believe It or Not?

If I Were a Rich Man

The Jewish Ethicist: Donor Trouble
The Connection between Israel and the Jewish People
Grit and Torah
Why We Can’t See True Reality
Comments
MOST POPULAR IN Current Issues
Our privacy policy