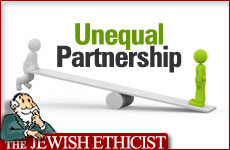 A partnership is all for one and one for all.

Q. When my friend and I began our partnership I anticipated our contributions would be about equal. But now I see that despite all the efforts of my partner, it is my abilities that are really responsible for our business success. Am I entitled to a larger share of the profits?

A. Partnerships are a most practical and durable form of business relationship. They have persisted in little-modified form since ancient times. When two people work together, they share risk and knowledge and take advantage of specialized abilities. The Talmud has a concise expression of the advantage of working in tandem. When explaining why a partner is not allowed to unilaterally break off the relationship before the stipulated time, even if he is willing to share in any losses, the sage Rava states succinctly: "The luck of two is better." (1)

While partnerships were known in the era of the Talmud, in later times and in particular with the flourishing of Jewish commerce in medieval times they became an immensely popular arrangement, and in the responsa literature we find a very highly developed legal theory of partnerships. One principle we find consistently is that in the absence of any explicit agreement, the assumption is that profits are shared equally. Thus we find in the Talmud:

Shmuel stated: Two people who mingled funds [for a business – even] if one invested one hundred and the other two hundred, the profits are shared equally. (2)

The business logic behind Shmuel's statement is that in most partnerships the efforts of the partners are a much more important contributor to success than the amount of money initially invested, so unless there is an explicit stipulation to the opposite we should assume that the intention was to split profits equally.

Naturally that doesn't mean that one partner can shirk and leisurely share in the profits of his hard-working partner. One of the great medieval authorities, the Rashba (Rabbi Shlomo ben Adret) writes that if a partner contributes only minimal efforts, this is considered a fundamental breach of the partnership agreement, and the partner is not entitled to a share of the profits. He is at most entitled to a modest salary for his efforts. (3) The opposite can also happen: if one partner invests efforts or resources that are clearly above and beyond what is called for in the agreement, he may be entitled to extra payment, in the form of salary or reimbursement, for his efforts. But he does not get an enlarged share of profits.

What all of these sources have in common is that the presumption of equal share of profits is a nearly unshakeable one, as long as there is no breach of the agreement. Even if the contributions are unequal, in money or in effort, they are either ignored or dealt with outside of the profit-sharing arrangement.

The situation you describe is common and perhaps even the norm in new businesses. When a business is founded, no one knows where the winds of commerce will blow. Who could have known, when Apple Computer was founded by two friends that in the future being a brilliant programmer and engineer like Stephen Wozniak would become virtually a standardized input, whereas being able to imagine the future of the market would become the main source of profitability? In other industries the opposite happened: the market went to people who could respond to the market with solidly designed products, not those who could anticipate the market. When you and your partner went into business together, you in effect purchased equal shares of stock; your increased contribution cannot change that reality.

On the other hand, if you really believe that your contribution is the key to your business' success, then you have the right to go off on your own. Assuming you didn't define a specific term for your partnership, it can be broken off at any time. Of course dissolving a partnership can be a complex matter; when there is a going concern typically one partner will have to buy out the other, and the valuation of the company can be as contentious as the valuation of the partners' contribution to profitability. Perhaps this is really the best course of action for you, or perhaps the prospect of having you do so will persuade your partner to make some changes in your agreement.

However, as long as you continue doing business under the original understanding, and as long as each partner continues to contribute his best efforts to advancing the business according to what was originally demanded and expected, changes in the conditions of the partnership can be made only by mutual consent of the partners.