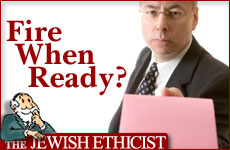 What circumstances justify discharging a worker?

Q. I have a good worker but it just doesn't pay me to keep him on. Do I have any obligations to keep him on beyond what it says in the contract?

Discussions on the Jewish law approach often center on the following Talmudic passage:

Runia was a tree planter for [the sage] Ravina. He caused damage [through carelessness in planting], and [Ravina] discharged him. [Runia] came [for a lawsuit] before [the judge] Rava. He said, Look what [Ravina] did to me! [Rava] said to him, he acted properly. [Runia] said, But he didn't give me advance warning! He said, he did not have to warn. Rava acted in this instance in accordance with his doctrine, for Rava said: Teachers, planters, slaughterers, blood-letters and scribes of the city are all considered to be forewarned. The general principle is, any time there is [the potential for] irrevocable loss, [the workers] are considered forewarned. (1)

The passage as it stands raises more questions than it resolves. What exactly was Runia's claim? Why was it rejected? What is special about these professions?

A tree planter would normally be hired, and paid, by the season. At the end of the planting season the contribution of the new trees would be assessed and the planter paid accordingly. However, due to some carelessness on Runia's part, Rava felt that there was an irrevocable loss and he didn't want to risk any further problems. Therefore, he sought to fire Runia in the middle of the season. This has significant adverse consequences because Runia now has to start looking for a new position, and furthermore most hires are at the beginning of the season and in mid-season work is hard to find. That is why Runia sought a legal judgment.

We can see that on the one hand Rava upheld the basic legal principle Runia had resort to. In normal circumstances, a worker may not be fired within the contract period, unless he has shown carelessness and also been warned. If a person makes a mistake at work, the proper course of action is to explain his misdeed and give him a chance to improve. However, certain professions require a very high degree of reliability. Any mistake is likely to involve an irrevocable loss. It is understood that in order to enforce this level, employees can be fired for misconduct even in the middle of the contract period.

Conversely, when the contract period is over there does not seem to be any inherent limitation on discharging a worker for any reason. Based on this passage and others, many observers are of the opinion that Jewish law adopts an "at-will" approach unless the contract or custom stipulates otherwise.( An exception is the great recent authority Rabbi Moshe Feinstein, who ruled that workers in general have a right to continued employment unless there is cause or their position is discontinued. (2) )

Jewish law generally recognizes secular law and custom as binding in employment law, so if there is a law, agreement or custom in your area or industry regarding discharging workers it should be observed. But in the absence of any special restrictions, Judaism views workers and employers alike as free actors. Employers are ethically bound to keep their word, so during the contract period workers shouldn't be discharged unless there is a good reason, and unless they are suitable recompensed. But once the contract period is over, employer and employee are alike entitled to reconsider their steps and find a new situation or renegotiate the old one.

In most cases the "contract period" would be the notice period written in the contract. If the agreement stipulates two months notice, then only misconduct could justify letting someone go within that period.

The letter of the law is not necessarily the same as thoughtful and prudent conduct, however. While the contract may say that two months notice is enough, most employers and employees develop mutual expectations of continued employment and of a degree of loyalty. It is usually a good policy, whenever possible, to give feedback to any worker before firing him or her for occasional underperformance, and to give advance notice in accordance with reasonable expectations and not only in accordance with written contracts.

The Jewish Ethicist - Pay Day
Blessing on Chewing Gum
Was Rahab a Prostitute?
Extras In Our Own Epic
Comments
MOST POPULAR IN Current Issues
Our privacy policy