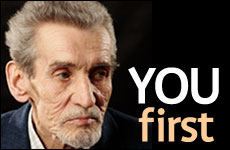 Reckoning with forces that split a family apart.

“Oh, I’ll be alright,” said the octogenarian with a small smile. “I’ve always been independent.”

“Yes, but now you’re after an operation. You’ve broken your hip and can’t walk on your own,” Gail said. “Do I understand that you live alone on the third floor?”

The old man answered slowly. “My wife died more than five years ago.”

“Do you have any children?”

“My son died as a small child many years ago.”

The answer was slow in coming. “I have a daughter… but I haven’t had anything to do with her for a decade.”

“Why is that?” she delicately asked.

“It’s a long story, I’d rather not talk about it,” Chaim said, no longer smiling.

But Gail wasn’t giving up. She needed to find a solution. “Well maybe we can change that. You’re going to need help, and the most natural place to look is within the family.”

“Ha!” Chaim blurted out harshly. “There won’t be any help coming from that side.”

“Tell me about the break. What caused it?”

“I gave her everything! An education, a wedding. I even helped them buy an apartment -- but what’s the use of talking. That all happened a long time ago and to make a long story short I’ve had nothing to do with Ilana and her husband in ten… no, 12 years.”

“What if I call her,” Gail suggested.

“Do what you want, but I’m not taking any part in that,” the old man said bitterly, turning to the wall and refusing to talk anymore.

Gail left and did some detective work. She found the name and phone number of her patient’s daughter and set up a meeting with her at her home. Ilana was a pleasant, middle aged woman who worked as a lab technician and had three teenaged children. She seemed genuinely concerned when she learned that her father had broken his hip and was having a difficult recovery.

“I don’t think there’s anything I can do,” said Ilana quietly. “We haven’t been in touch for 12 years or more. At first I tried to make peace with my father, but he’s such a stubborn old character. I’m sorry that he holds a grudge. My children haven’t had a grandparent because of that. Their other grandparents live abroad -- my husband’s an American. Mind you, we see them more often than we see him.”

“Tell me how it all started,” Gail said.

Ilana sighed. “When my third child was born, he was the first grandson in our family. My father thought we’d name the baby after him -- that’s the custom in the Moroccan community. But my husband doesn’t have that custom. He had a brother who was killed in a car accident, so we named the baby after him. My father was furious. He also wasn’t the sandek (the godfather). I don’t even remember why. He left the brit in the middle, yelling and cursing and never came to visit us again.”

Ilana was silent for a minute. “Even when my mother died, we didn’t sit shiva together. It’s very sad. We’re not a big family. My only brother died when he was eight years old from meningitis. My mother, may she rest in peace, used to sneak over here to visit us, but oy vah voy if my father ever found out. So I’ve learned to live without a parent. It hurts, but what can I do.”

"Now, after all these years, I should just forget everything? No! He started this fight, let him say he's sorry."

“Well now he’s ailing and in trouble. He needs you. Maybe you could somehow make up with him.”

Ilana’s mouth turned downward and a harsh look came over her face. “Now that he needs me, I should forget everything? All the insults he hurled at me when I tried to make peace years ago? The way he embarrassed me when we sat shiva alone for my mother and people couldn’t understand why? Now, after all these years, I should just forget everything? No. No! He started this fight, let him say he's sorry.”

“Your father is an old man. It’s now or never.”

But Ilana was just as stubborn as her father and Gail left feeling despondent.

The next day Chaim perked up when he saw the social worker come into his room. “Nu?” he asked, seeming to hope that she had something pleasant to tell him.

He really does want to make up with his daughter, Gail thought. He just doesn’t know how to go about it. “I met your daughter," she said. "She really is a lovely person. She's upset to hear you’re in the hospital.”

“I think she’s waiting for you to call her so that you two of you can get together again.”

That sense of hope slipped away from Chaim's face. “Never. I’ll never make a move to forgive her after what she did to me…”

Chaim could barely speak. “My only grandson… at the brit, she didn’t give me any of the honors. She didn’t call the baby in my name. She ignored her own father, the man who raised her and did so much for her. Not a single honor. I couldn’t lift my head in the synagogue when people asked me ‘What did they call your grandson?’ The shame! And afterwards, when she called, to explain, to apologize, she only took her husband’s side, not mine. No, if she wants to make up, let her call me.”

“Well if you’re not going to get assistance from your family, we’ll either have to arrange to send you to a nursing home or apply for hired home help.” Chaim refused to consider an institution, so Gail asked him to come to her office and fill out forms for a home worker that afternoon.

Chaim was wheeled into Gail's office which she shared with a colleague, still seething with anger and perhaps disappointment. As they began to fill out a form, a young woman’s voice asked from the door, “Is the social worker for the children’s ward here? I need a parking permit for my son who’s on crutches.”

It was Ilana. She immediately recognized Gail. Then her eyes fell on the frail, elderly man in the wheelchair sitting across the desk from the social worker. He looked so small and ailing. Without thinking, she fell at his side hugging and kissing him, crying, “Oh, Abbale, Abbale, you look so pale and sick. I didn’t know! I didn’t know!”

The old man returned her hugs, “Ilana, my Ilana!” Tears were streaming down his cheeks.

And if you ask the daughter and her elderly father how it came to pass, they’ll look at each other, laugh and say at the same time, “Well you turned to me first, didn’t you?”

Anguish of an Aunt