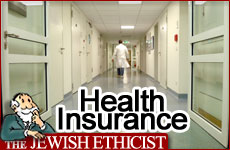 Q. What is the role for community oversight of health care?

A. The United States is in the middle of a vigorous debate over the proper role of government in guaranteeing health care for US citizens. The debate however is over means; all side in the debate agree that the government has responsibility for making sure citizens get some minimum level of health care.

This approach is certainly supported by Jewish law and tradition.

The Torah commands the Jewish people to give charity in the following verses (Deuteronomy 15:7-8):

When there will be a needy person from one of your brothers in one of your gates in your land which the Lord your God gives you, don't harden your heart or close your hand to your needy brother. Surely open your hand and lend him enough for his needs, which is lacking to him.

This general formulation "enough for his needs" implies that the obligation extends to any kind of need, according to customary standards and not merely according to bare subsistence. The Tosefta (a collection of legal aphorisms similar to the mishna) states:

The Talmud learns in similar fashion that a person's needs includes dwelling, basic furnishings, and the ability to marry. (2)

Since medical treatment is also a basic need, this is also included in the basic communal charity obligation. Jewish communities in the Diaspora invariably had communal charity funds; Maimonides, writing in the twelfth century, writes that "We have never seen nor heard of a Jewish community that lacks a charity fund." (3) Among the needs dealt with by these funds were medical expenses; the Talmud tells us that this is really just another kind of basic sustenance.(4) Just as a healthy person needs food, so a sick person often needs medicine or other care.

I again emphasize that this column is not meant to take sides in the current debate. No possible proposal could provide comprehensive coverage for everyone, since there are insufficient resources to accomplish this, and even under the current system basic needs are provided for all, even according to modern standards. But I think it is important to demonstrate that in Judaism there are basic principles of charity and mutual aid and that these include providing for medical needs at some reasonable level.