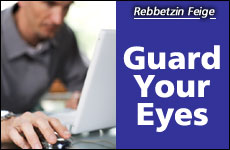 My husband has been looking at inappropriate websites. What should I do?

To make a long story short, I recently discovered that my husband has been occasionally looking at inappropriate websites. I'm in shock and don't know what to do. Help!

Many experts in the field have identified your dilemma as one of epidemic proportions.

The battle for the soul has never been more fierce. One of the great Sages of the 20th century commented some 30 years ago that merely walking down the street in America was fraught with more risk to one’s spirituality than a lifetime in Europe of old. The media and the advertising industry appeal to the basest in human nature, and have inundated the public thoroughfare with sexually provocative images.

The concepts of modesty in attire and decency in comportment are under constant attack and increasingly marginalized. To make matters worse, the internet has made pornographic sites easily accessible to the point where the male psyche is being exploited as never before.

It must be underscored that when it comes to sexuality, men – unlike women – are biologically driven creatures. This uncomfortable fact of life represents a unique challenge for women, who may find it hard to wrap their minds around the realities of the male disposition in this regard. The peculiar vulnerability of men to visual stimulation is a sorry reality that requires careful judgment, caution and discipline on everyone’s part.

The vulnerability of men to visual stimulation requires discipline on everyone’s part.

The Reality of Human Nature

It is for this reason that the Torah, in its great wisdom, circumscribes intergender relationships. The boundaries are clearly delineated by Jewish law, categories of rules which include the prohibition a man and woman being secluded together in closed quarters (with the exception of certain immediate relatives), the “hands-off” policy vis-?-vis unrelated members of the opposite gender (again, exclusions would apply to certain immediate relatives) and guarding one's eyes from viewing that which will have a compromising and contaminating effect on our wellbeing.

No one is immune to the power of human emotions.

A typical reaction of the uninitiated to these restrictions is the often heard comment, “Don’t God and the Torah trust you?” The response is that the Torah deals with the reality of human nature and the truth of how we are strung together. The underlying concern is the reluctance to put at risk our moral integrity, or gamble, however improbably, with our spiritual rectitude. It is in the proscription of these behaviors that the Torah informs us of our vulnerabilities.

The message conveyed is that no one is immune to the vicissitudes of human emotion. If we don’t take the necessary precautions, the circumstances of one’s life at any given time can be such that our defenses will be down and we could, God forbid, succumb to the suasion of temptation.

Consider Vicki and her husband who moved in social circles where a peck on the cheek among couples was thought of as completely innocuous. This seemingly harmless convention led to other “harmless” familiarities. Ultimately these social interactions proved devastating to them and other members of their social group. The contemporary reader needs no elaboration on the direction this took and the tragic implications for their marriages.

The internet and the many technologies available in our time have much to offer that is useful and beneficial. However, as with any other tool it can be used constructively or destructively. Safeguards are imperative. Alas, categorizing the legality of the easy access to lewd and depraved pornographic sites as an expression of “freedom” is symptomatic of the illogical and unrealistic approach to morality in our culture.

In contrast to Western civilization’s definition of freedom which denotes license, where anything goes, the Jewish concept of freedom is captured by the following metaphor of an Indian philosopher. He said, “I have violin strings on the table before me. They are free to move in any direction but they are not free to sing. It is only when I bind them to my violin that they are for the first time truly free, not to move in any direction, but free to sing.” A posture of license, of no-holds barred, of unbridled capitulation to desire, obstructs the music of our soul, the better part of ourselves, from emerging.

Adopting a disciplined and perhaps restrictive approach to internet viewing, or to any pleasure, may not feel like freedom, but when one has been forced to pay the huge price exacted by a life of unrestricted latitude, the merits of restraint and self control gain new respect. The Torah invokes the hallmark of human dignity, choice and the exercise of will power, demanding discrimination between what is and what is not appropriate.

Dear reader, viewing and getting involved with inappropriate sites can occur for a variety of reasons. It could happen quite innocently, a random popup or responding to the suggestion of a friend, colleague, classmate, etc. The challenge is to get unhooked immediately before too much damage is done.

The other, more likely scenario is that it's an act of compulsion. For some it serves as a palliative, a means of drowning oneself in a mind-numbing activity that blocks out the pain of the life they are living. For others, these sites serve as means of self-reliant therapy. These men typically come from a background where they had no one to turn to in times of personal need and hence learned to engage in self-soothing remedial activities.

Therefore, when adult life presents difficulties and feelings of aloneness, echoes of the past resurface and they reflexively resort to pornography for amelioration rather than reaching out to others in their life.

I would suggest the following:

The Inner Struggle
Why Are The Prayers Of Yom Kipur So Repetetive?
Ha'azinu 5783: A Time for Unity!
Twisted Thinking
Comments