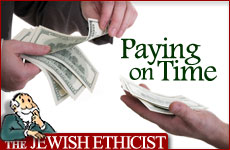 All creditors need to paid on time, but workers especially.

Q. Sometimes there is just not enough cash for everything the business needs. Can I delay paying my workers?

A. "Everything the business needs" could mean many things. Much money is needed to build a business, and credit is not always easy to obtain. Using suppliers and workers as a source of loans is definitely improper. Everyone understands (grudgingly) that if you don't have any money they are not going to get paid, but if you do have money you must pay your debts first. The Talmud declares that "Paying a creditor is a mitzvah [commandment]." (1)

In some cases workers or creditors are willing to extend credit in order to help ensure the continued thriving of their customer or employer, but this kind of arrangement should always be made through fair negotiation.

Beyond the general commandment to pay debts on time, the Torah places a special emphasis on paying workers on time. In the book of Leviticus (19:13) we read: "Do not [unjustly] withhold that which is due your neighbor. Do not let a worker's wages remain with you overnight until morning." This commandment applies specifically to wages of a worker.

Do not withhold the wages due to your poor or destitute hired hand, whether he is one of your brethren or a proselyte living in a settlement in your land. You must give him his wage on the day it is due, and not let the sun set with him waiting for it. Since he is a poor man, and his life depends on it, do not let him call out to God, causing you to have a sin.

First the Torah prohibits withholding wages altogether. Even though stealing has already been forbidden, there is a need to add a specific prohibition regarding wages because of the extra severity. The Torah further prohibits even delaying the payment. It also gives the reason: "His life depends on it". A more literal translation is "he bears his soul on it." This could mean that his soul, that is, his life depends on it -- he needs it for sustenance. Another understanding, the one mentioned in Rashi's commentary, is that he risks his life for it if the job is dangerous. Perhaps the plain meaning of the words is best captured by the commentary of Chizkuni, who explains that the worker is longing for his pay.

While most parties to a transaction take a more or less businesslike approach to their cash flow, the worker is an exception. He put his heart and soul into the work, all in expectation of getting his wage on time. His disappointment is far greater than that of the average creditor.

Another question is how you got into this situation. Any debtor is forbidden to take a loan and spend the money wastefully or recklessly in a way which endangers his ability to repay. (2) But regarding a worker, there is a special additional requirement to plan cash flow to avoid problems. The Sefer HaChinukh (588), a commentary on the commandments, writes:

The Scriptures didn't obligate him unless he has the money or is able to pay, but if he is unable to pay without suffering a large loss the Scripture did NOT obligate him. Even so, any thinking person should make sure he will have the money at hand before he hires workers.

The bottom line is as follows: All creditors should be paid promptly when possible, and it is wrong to turn suppliers or employees into lenders without their informed consent. Likewise, if there is no money then obviously everyone can't be paid. But there are still several advantages a worker has over other creditors. The Torah has a specific commandment to pay them on time, and a prohibition to delay; there is a greater requirement to worry in advance that the money will be available; and the Torah reminds us of the pain and disappointment caused by delayed pay, so that our sense of empathy should also spur us to find all means to pay workers promptly.

Torah translations are from "The Living Torah".

The Jewish Ethicist: Kicking Back Kickbacks

The Jewish Ethicist: Supervising Workers
What Makes Eli Run?
The Tyranny of Materialism
Science Enters the Mysterious Inner World of Consciousness
Comments
MOST POPULAR IN Current Issues
Our privacy policy