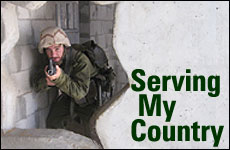 Why this fourth-generation American moved to Israel and joined the Israel Defense Forces.

As a ten-year-old kid, I looked as American as you can get. But deep down I lived a completely different life. I lived in the shadows of the thousands of Jews fleeing Europe to get to one place: Israel.

I can see in front of me the faces of those fleshless Jews packed like sardines in fishing boats, when they first saw the shores of the Holy Land.

The boats that made it docked, and the men and women were given guns and taken to fight for their long lost country that they didn’t even get to know yet. The children and the elderly were taken to different kibbutzim. Those were the stories I grew up with. Even when I lived near Beverly Hills, I knew that across the ocean was my real home.

When I was 19, leading a band enjoying the summer in the Catskill mountains, those pictures didn't stop flashing in front of me. So I made a decision, no turning back. I got myself a job as an ice-cream man at a pizza shop in Woodbourne, made enough money to buy myself a one-way ticket to Israel and a little spending cash.

And there I was living in Jerusalem, 22 years old, married with two kids, but for some reason I still felt that there some part was missing.

Why shouldn't I be able to join those faces, those Jewish warriors? If boney, sick Jews did it, so can a fourth-generation American! 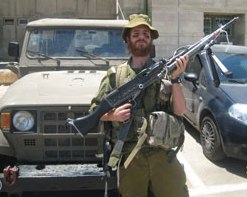 Well with the help of General Effie Eitam, my dream came true. I became a soldier in the Israeli army.

I still can’t forget those moments of putting on the green uniform, the tears rolling down my cheeks. I was surrounded by a bunch of other Jews from around the globe -- South America, South Africa, Australia, Germany, Ethiopia, India, Russia, France, Turkey. We even had someone from Iran.

We all had those same butterflies in our stomachs, similar to the ones I had on my wedding day. The feeling of Jews coming back to our homeland from literally all over the world.

After my service I felt that I didn’t do enough, so I joined an officer's course to become a “combat chaplain” (I think that it only exist in Israel).

We learned leadership skills, army tactics and strategies, and most of all we learned that “one for all and all for one” is really a Jewish saying. 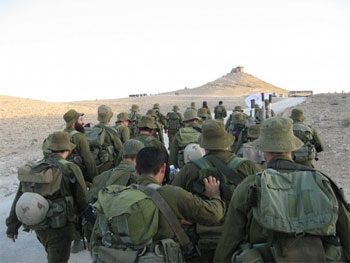 For one of our training sessions, we were dropped off in pairs in the middle of the desert after memorizing the maps for a couple of days. We had to meet up in a certain point by the end of the day after collecting certain flags. The ground looks completely different than they do on maps. A slight dip on paper was in fact a huge valley. We regrouped and climbed up Camel Mountain (it didn’t get its name for nothing) in war formation, keeping my eyes looking in all directions for the mock enemy.

The climb was very hard. I felt like I wasn't going to make it to the top. From the corner of my eye I noticed Asher, one of the biggest guys from my team, kneeling down on a rock breathing deeply. “I’m not going to make it…”

It took three of us to drag him along, rotating every couple of minutes. Toward the end all the teams started running to the finish line. Under his deep breathing Asher said, “Go -- I'll catch up!” but we just kept carrying him along.

We all made it. Our team was last but deep down inside we knew that we were first. Later that night our squad commander said Asher was the number one soldier.

The sun was setting and we lined up for Hatikva and “Ani Ma'amin.” Those same tears came flowing down, only a little less since I was dehydrated from a long day in the desert. The faces from the dehydrated Jews in the fishing boats flashed before my eyes. I thought to myself, I am now here with you… sorry for taking so long to catch up, but I am here, and this time to stay.

Joining the IDF has changed my life. In addition to the confidence, sense of accomplishment and discipline, I discovered a connection to something greater, to my nation and its land. The fulfillment of being part of the long chain of my Jewish ancestors. Fighting side by side with other Jews from around the world, no matter what background, prepared to fight any enemy that may come up against us.

Living in Israel and serving my country I feel I am the next link in the chain of history.

Aaron Katsof is the Director of The Heart of Israel

Nov 29, 1947: The Story of a Vote
It Takes A Lot Of Faith To Be An Atheist
How Instagram Brought Back This Nostalgic Soup
What Makes Eli Run?
Comments
MOST POPULAR IN Israel
Our privacy policy