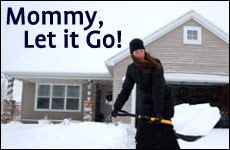 Sometimes the greatest parenting lessons come from our children.

Anyone who has been in the New York area this year knows that it has been a most difficult winter, with major snowstorms and mounds of snow.

One Tuesday morning in February, as the snow heavily fell from the darkened sky, my phone rang with the following message:

County ordinance dictates that all snow must be shoveled and removed from your sidewalk within five hours from the time that the snow stops falling. Those who do not have their sidewalk shoveled will face penalties.

Five hours? And what a snowstorm! My boys were in yeshiva and my husband away on a business trip. I could attempt to shovel, but the job seemed daunting. Lucky for me, the doorbell rang a few hours later. Two hardy young men offered to shovel my walk for a ‘nice’ fee. Perfect.

A few hours later, it started to snow again. I was definitely aggravated when my newly shoveled walk once again became covered. This time, it was a blizzard. I don't remember ever seeing such a storm.

The next morning, I peeked outside my window. Massive snow had piled up covering our world in a heavenly white. It was beautiful. What wasn’t so beautiful was the thought of shoveling.

I was grateful when the doorbell rang with an offer to shovel from a group of teens. We settled on another ‘nice’ fee and I instructed them to be sure and shovel the entire length of the sidewalk.

When they informed me that the job was complete, I did a quick check and thanked them for their work. I then settled inside. It was nasty out and driving was hazardous.

I had been scammed. The teens had only done half a job.

It was only when the sun came out the following day that I realized the truth. I had been scammed. The teens had only done half a job. They had shoveled the beginning of the walk and stopped.

By now, the snow was impossible to remove. It had iced up and was incredibly high.

But I didn’t give it much thought. Shabbos was coming and I needed to get it together. Everything took double time with snow piled everywhere. Thankfully, by the time sundown arrived, we were ready to greet the Shabbos Queen.

Imagine my shock when a few days later I opened the front door and found a long piece of paper taped on.

A summons to appear in court! Me? Why? As I scanned the paper it became clear. Due to failure of not shoveling your walk after five hours had passed.

I recently had my date in my local village court. I decided to bring my 11-year-old daughter, Aliza, along with me. It was nighttime and I didn’t want to spend the evening away while she was home.

We first sat through all the traffic cases, listening to the drivers defend themselves for driving without licenses, suspended licenses, noisy mufflers and tinted windows. One hundred dollars, two hundred dollars, legislative fines, and talk about future court dates went back and forth. Finally, the court cleared out and it was only us shovelers that remained.

The judge advised us that we would each meet personally with him in a private court room. My name was called. I was not very nervous. All I was here for was snow shoveling.

“And how do you plead?” the judge asked me.

“Not guilty your honor,” I said confidently.

I proceeded to tell him about the double snowstorm, how I had hired not one but two groups of young men to help me, and how I had been scammed.

“Not good enough,” he said. He proceeded to take out a huge blow up photo of my sidewalk. “This is unacceptable. The fine is $1000.”

My head was spinning. You have got to be kidding, I thought. $1000 for not shoveling the walk and people are driving without licenses and don’t even pay half of that?

“Your honor,” I said, “I tried. And when the next storm came around two weeks later I woke up early in the morning and made sure that the walk was cleared.”

"There was no other storm.”

I was shocked. I knew that there was another storm. I knew that I had let out a sigh of relief when my walk was shoveled and now I was being fined this huge amount and told that I had not acted responsibly.

The judge looked at me impatiently. “You insist there was another storm. That’s just not true. Pictures don’t lie. I will fine you $100 this time but you had better be more responsible in the future.”

I walked out hurt and offended. I knew the truth in my heart but this judge did not believe me. He told me as much in front of my daughter and in a court of law.

I drove home, agitated. We walked in the door and I took out a calendar trying to remember the dates. My son, Eli, had just finished his nightly learning and I asked him if he could recall a second storm.

“Yeah, Mommy,” he said easily. “It was the Thursday of Purim.”

I couldn’t believe it.

“I feel like going back there right now with my calendar,” I said. I went on and on about the judge not believing me and how dare he accuse me of not telling the truth.

“Mommy,” my daughter Aliza said amidst my rambling. I turned to look at her.

I paused for a moment. I took a deep breath. And I realized that this 11-year-old child was right.

Isn’t this exactly what I have tried to teach her time after time? Through all the toddler playground battles, the little spats between friends and siblings, isn’t this the lesson that I have always attempted to leave her with?

Don’t get so upset, don’t get angry, don’t go on and on about it-it’s just not worth it!

How often do we tell this to our children? But what’s the point if when it is our turn we allow our emotions to take over? We don’t know how to let the moment pass and those encounters that leave us mad, whether with close friends or strangers in the supermarket, take over our day.

Aliza was right. And the next day when the thoughts of ‘how could he’ crossed my mind, her words rang loud and clear. 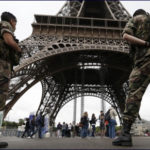