Tales Out of School 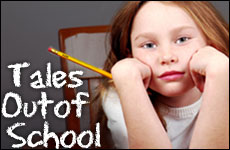 I remember going to a Parent-Teacher meeting when one of my daughters was very young. "When your daughter prays," said her 22-year-old teacher, "she does it with a lot of energy and vigor."

"Great," I responded. But the teacher wasn't finished.

"But I don't think she's doing it out of love of God; I think she's too focused on trying to win my approval." (Which, it was immediately obvious, was not forthcoming!)

It seemed to me (not an unbiased observer, I acknowledge) that this teacher was more caught up in (read "proud of") her psychological acuity than the success of my daughter.

We have a principle in Torah that "metoch lo lishma bo lishma", loosely translated as "If you do the right thing for the wrong reasons, you will eventually come to do it for the right ones." This is another way of saying that bribes work. Or positive reinforcement if you prefer.

The Boy Scouts give badges to reward target behaviors. Teachers (other than the aforementioned one) give gold stars or "money" to spend in the class store. Parents give candy, baseball cards, money, whatever it takes (depending on how frazzled and desperate we are) to encourage desirable character. Our bodies need some external motivation.

Even as adults we frequently promise ourselves certain rewards for goals achieved (be it weight loss or something loftier).

Our children should only be complimented for our efforts in that direction, not chastised for insufficient focus and concentration.

The Torah says that men should buy their wives new jewelry or clothing for the holidays. Shouldn't we just enjoy the holidays on a spiritual level? Of course. But the Almighty recognizes that sometimes we need a little help getting there.

It is a tremendous accomplishment to do what's right, to follow the Almighty's commandments, to work on ourselves, to learn and to grow. Our children (and us!) should only be complimented for our efforts in that direction, not chastised for insufficient focus and concentration.

Of course the ideal is the perfect melding of the two -- the appropriate action with the appropriate motive. But we're human and we all need a little help. And the more we accustom ourselves to behaving in the way we'd like, the more our focus and intent will grow with us.

"She needs to try harder."

I once went to another Parent-Teacher meeting right after a lecture by Dr. Mel Levine and was brimming with new insights into my daughter's behavior. Frequently her report cards said, "She needs to try harder," "If she would only put in more effort."

One of Dr. Levine's crucial ideas is that just as children vary in their memory skills and their math abilities and their musical talents, they vary in their ability to put in effort. Some children are natural overachievers. It's hard to stop them. "Relax, you don't need to be first in the class or get the A+," I would tell another child. "Get some sleep." But my remarks fell on deaf ears. She was unable to slow down. It was constitutionally an anathema to her not to excel.

And there are other children for whom sitting still and concentrating is very difficult (I'm not discussing ADHD here, and yes I had her evaluated), for whom "just making more of an effort" is a tremendous chore. And just as words can't diminish the drive of an overachiever, a type A personality, they can't motivate or speed up their opposite. It's not simply a matter of "lighting a fire"; they are hampered in their ability to even try.

So I said to my daughter's teacher that evening, as she trotted out the standard complaints, "You have to appreciate that even making an effort is hard for her." I sat back and waited for the light of recognition to dawn.

"Well, tough for her," responded her teacher.

I still berate myself that I said nothing in return. It was probably the only time in my life I could say I was ‘dumbfounded' (a word usually reserved for fictional characters). But I was. What could I say to someone who refused to see, refused to care, refused to invest herself in her students?

And more importantly, what about my daughter? My husband and I decided on a two-pronged strategy. Our daughter needed to get high grades in the non-academic parts of her school life (itself a major challenge when the academic side is so frustrating) -- in behavior, socialization, character. That was all we ask of her (in truth, that's all we ask of all our children.)

"I could never say this out loud without crying," she wrote, "but thank you for believing in me."

And at home we would shower her with love and our belief in her ultimate success. It wasn't always easy. Sometimes (many times), our commitment or energy wavered, although we tried not to let it show. And the battle is not over.

But there are little sparks of encouragement along the way that sustain us through the rougher parts of the journey. A number of years ago at Rosh Hashana she sent us a card. "I could never say this out loud without crying," she wrote, "but thank you for believing in me." I don't know if that validated all the sleepless nights -- but it definitely helped.

These are the kids that the schools are leaving behind, are ignoring (at best) or attacking (at worst). And the irony is that they may need the attention, love and support most of all.

And then I had an insight that didn't occur at Parent-Teacher meeting. With all the focus (long overdue) on children with learning difficulties, we may be in danger of ignoring the other side of the coin -- the overachiever.

It is difficult to slow down the overachiever, to get him or her to relax. The best we hope for may be a good stress ball to squeeze. And while there may be a risk at the extreme ends of burnout or other psychological issues, the real problem may, believe it or not, be lack of attention. How could that be? Don't the "successful" children get all the notice?

Sometimes. But we may take it for granted. We may come to expect it. The praise may become rote or nonexistent.

I once had a summer job with a governmental agency. Being very conscientious I was at work exactly on time every day. My co-worker was not. But when he did come on time, he was praised and applauded. I was never given any recognition for coming on time (I hadn't actually expected it until I saw the reception he received) but when, once, I was late, boy was I criticized.

These are two of the danger points for the overachieving child -- not enough recognition for their success because we become used to it, and inappropriate criticism because we have set such high standards and expectations.

These children carry a heavy burden, and while they may get more positive recognition than the child with learning differences, we shouldn't (as parents or teachers) make the mistake of think they don't need it. And just as frequently as their less accomplished siblings.

I was surprised to discover in one of my children who exemplified this overachieving-type personality, a strong underlying layer of insecurity. Where did that come from? She was the child who, we assumed, had everything going her way. And although we didn't ignore her, I guess because she seemed to have everything under control, we gave attention to those who were more vocally or obviously needy. At a cost.

You can't parent on cruise control.

Although there are certainly times in a family's life when one child needs more attention than another, in general all of our children need constant attention and love.

I haven't really given up on Parent-Teacher meetings (and I've been to many wonderful ones over they ears but it's like home movies; who talks about those?). For the most part the schools and teachers have been terrific -- hardworking, underpaid, enthusiastic, caring -- and with a desire to help. Sometimes we just need to give them the tools.

Parenting is a 24/7 lifelong occupation. You can't do it on cruise control. But once we decide to participate in the awesome experience of having children, we're hired. It's a big job, but someone's gotta do it. And that someone is us.

7 Ways to be Your Child's Role Model

9 Ways to be a Great Parent

Diamonds In Your Stroller
Deep Breaths
What Happened to the Truth?
The Japanese Everything Bagel Spice Recipe
Comments
MOST POPULAR IN Family
Our privacy policy