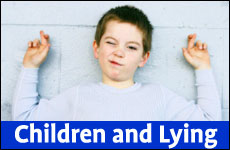 Are we teaching our children to lie?

Who doesn't want to raise an honest child?

We want to bring children into this world that cherish truth, but listen to this: researchers* have concluded that really smart kids begin to lie at the age of 2 or 3. They found that the savvier the child, the greater the chance that he will grow up to become a habitual liar.

Here are some shocking facts:

98% of teens admitted that they lied to their parents.

The average teen lies about friends they were with, clothing they wore when they were out of the house, how much money they spent, chaperones being present at parties, and what they did when their parents were not home. They lied about movies, dating, drugs, and friends who were drinking and driving.

Most of these kids said that they lied a lot. But when asked, they also said that lying is wrong. Why the disconnect?

Do we teach our children to lie?

I do not doubt that most parents believe that we are honest human beings. We don’t steal, rob, or live fraudulently. We try to teach our children well, answer truthfully, expect them to deal with others honestly, and not cheat on their exams. Deceitfulness and untruthfulness are not tolerated. Catch your child in a lie and I am sure that there will be consequences.

But there are the little moments, the encounters that go unchecked that our children see and hear throughout the day that impact their understanding of living life truthfully.

They see us do it

Imagine this scene. You’ve just come home and you’re exhausted. You had a really hard day. The phone rings. Your son comes to tell you that Rabbi Levine from Organization X is calling. You know what he wants. And you’re just not in the mood to get involved. Or it could even be your mother-in-law on the phone.

Oops. You just taught your son that it’s okay to lie.

What about that trip to the amusement park you took over summer vacation? All children under ten can buy discounted tickets. As you’re about to pay, you say that you have three children under the age of ten.

Your 11-year-old looks at you quizzically. You give her a wink, and count your change.

You have just transmitted a life lesson more powerful then any speech on honesty.

When we take a shortcut by being less than honest, we're telling our children that little white lies are insignificant.

Our children are sponges. They absorb every action, every encounter, and every conversation that they hear. Nothing goes over their heads. We speak in vain about truthfulness if we, ourselves, are not truthful. When we seek the easy way out or shortcuts in life through dishonesty, we are telling our children that these little white lies are insignificant. They grow comfortable with dishonesty. Eventually, it is we, the parents, who become victim of our own untruths. Our children end up lying to us and we wonder why.

All children lie one time or another. It’s upsetting but we can use the experience to help our children learn to tell the truth in the future. Our reaction to the situation can make all the difference.

*Never shame a child for lying.

Instead of embarrassing him and yelling at him, let him know that you are disappointed in his actions. It is not that he is a bad person, but it is what he did that is unacceptable. Give him your decided consequence or speak to him about your feelings. Then let him know that you are confident that he will make the right choice in the future so that he can once again earn your trust.

*Never set a child up to lie.

Try to figure out if this is becoming a habit. Ask yourself if your child is dealing with self esteem issues, trying to impress others, or having problems with siblings or in school. If lying is becoming second nature, you are facing a problem that needs help.

What would you do?

Of course, we are the greatest role models for truth in our children’s lives.

A mother who attends my classes told me about the following incident and I was moved to share it with you.

Jill was at a class I had given where we spoke about modeling character traits for our children. The next week, she was driving with her kids and talking on her cell phone. Sure enough, she heard a loud siren blaring behind her. She checked her rearview mirror, and a police car was right behind her. Jill quickly threw her phone under the seat and pulled over.

“What seems to be the problem, officer?”

“Were you on your cell phone?” the police man asked.

“Are you sure? I thought I saw you on your cell.”

“No, officer,” Jill said. “I definitely was not on my phone.”

Jill was thrilled to get out of an expensive ticket and be on her way. It took just a second till she heard a little voice from the back.

“But mommy, you were on the cell phone! You didn’t tell the truth to the police man!”

Uh oh, Jill thought to herself. All those parenting classes I’ve taken, all those times I’ve tried to teach my kids to do the right thing and now it comes down to this.

With a sinking feeling, Jill knew what she had to do. She drove ahead and chased the police car down three blocks until she found him. She honked and honked. Finally, he pulled down his window.

“Officer,” Jill said. “I lied. I really was on my cell phone. I am so sorry for lying.”

Jill turned around and saw her son’s eyes open wide. She knew that she had just delivered the greatest life lesson on honesty that she could possibly give.

What would you have done?

Worst Parent in the World

Just a Slight Adjustment of Focus
Vayelech 5783: Regret and Repent
Rabbi Sacks: Focus On the Important, Not the Urgent
Put Your Foot Down: Are Human Feet Poorly Designed?
Comments
MOST POPULAR IN Family
Our privacy policy
Aish.com Is Looking for Great Writers