A Wealth of Goodness 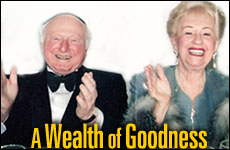 How Joe and Helen Berman changed the world through giving.

Helen and Joe Berman were among dozens of young Jewish newlyweds living in poverty in the area of Kensington Market in downtown Toronto during the Great Depression. Helen was 19 years old and pregnant with her first child.

It was the dead of winter and in lieu of a proper maternity winter jacket, Helen had resorted to wrapping herself in a thick wool blanket until the young couple could save enough money to buy her a coat. When they finally did, Helen left the house for a local department store, elated, when she saw a young neighborhood boy trudging through the snow wearing sandals. When she asked him why, he told her his family couldn’t afford shoes or boots.

“My mom took the young boy with her," recounts Shellie Grafstein, who made aliyah from Toronto three years ago with her husband and five children, "and instead of buying herself a coat, she bought him new boots. She told me that those boots warmed her heart more than any old coat could. My mom always says, says ‘The heart is a muscle that you have to exercise all the time.' Both of my parents were salt of the earth -- their hearts were just massive.”

"The heart is a muscle that you have to exercise all the time."

After a long and extremely successful career as founder of Cadillac Construction, the company that built the Eaton Center and Erin Mills, among other Toronto landmarks, Joe Berman died in 2003 at the age of 81, leaving Helen behind.

“My father was amazing. Even after God blessed him with incredible material wealth, he still took the subway to work every day and bought his clothes in Kensington Market,” says Shellie.

After a lifetime of giving, Helen, 89, now lives a modest life in Thornhill, having given away most of her riches. “My mother felt strongly that their wealth was a gift from the Almighty and that it must be shared. It was a gift that they shared to the fullest. She always says, 'Does a death shroud have pockets?’"

Helen now suffers from Alzheimer’s and, says Shellie with a sigh, “she can’t remember all the amazing things she did. She loves to hear the stories, though, just like all of us do.” Shellie has made it her mission to keep the torch of memory lit and to use the goodness of her parents to inspire others.

Joe and Helen Berman, 5’4 and 5’2, respectively -- “tiny people who commanded tremendous respect,” as Shellie describes them -- gave philanthropic support to dozens of organizations, often providing their seed money. The very long list includes: the Nefesh Dovid Yeshiva for the hearing impaired in Toronto; the Reena Foundation for disabled children in Toronto; the Boys Town Jerusalem school for the children of new immigrants to Israel; the first Aish HaTorah branch in Toronto and the Ohr Somayach Jewish educational institute in Jerusalem. 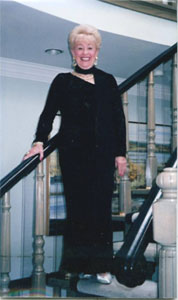 But what Shellie remembers most is not the organizations or the money her parents gave, but the way they did it. “Where I grew up there are a many rich people and all of them write checks. There is a big difference between writing a check and taking a personal interest in someone’s life -- giving jobs, giving self-esteem. These are the highest forms of tzedakah and that’s what my parents did.”

Shellie, the youngest of five Berman kids, grew up in a huge mansion on the Bridal Path, one of Toronto’s wealthiest neighborhoods. “I hated growing up in this big, ostentatious house,” she admits, “but I loved that my parents did so much good with it.”

Besides opening the house to the community -- theirs was like a public neighborhood pool -- they also opened their doors to families in need.

The first family the Bermans “adopted” to live in their house some 35 years ago was a woman from Scotland and her two young sons. Helen had met the woman 15 years prior, before she was married and had children of her own. She came to Toronto to work as a nanny for a neighborhood family. Tragically, the family’s newborn died of Sudden Infant Death Syndrome and the woman was sent back to Scotland, where she met her husband and started her own family. When Helen learned that the woman’s husband had died, leaving her quite destitute with two young children, she insisted on bringing her back to Canada to live with them.

Eventually the woman remarried in Toronto. “My father walked her down the aisle,” Shellie recalls.

The Bermans “adopted” a second family five years later. Helen had read an appeal in the morning paper from a young mother who had just immigrated to Canada from the Caribbean and had given birth to quadruplets. The young family had nothing, and they were reaching out to the community for help.

“Joe, which of these homes can we give to the Ricky family?”

After sending a check that very day, Helen admitted to Joe that she just couldn’t sleep. She got into the car and insisted that her husband drive her to one of his company’s new home developments. When they arrived to the project, she asked him, “Joe, which of these homes can we give to the Ricky family?”

After he got over the shock of giving a home to complete strangers, he let her choose which one she wanted to give. From there, she went straight to the department store and bought all of the furniture needed to outfit the house from top to bottom, including four cribs, four playpens, four high chairs, blankets and toys. From there, she went to the supermarket and stocked the house with all the essentials. In two days the house was perfect. “She even cooked for them!” recalls Shellie. “Then she had my father drive to the newspaper that had published the ad and gave them the keys to the house to give to the family.”

The Rickys became members of the Berman extended family. The parents called Helen and Joe ‘Mom and Dad’ and the kids called them ‘Bubbie and Zaida.’ The Rickys attended all Berman family parties and when the babies turned one, Helen threw them a huge birthday party at the mansion. She sent them to summer camp and after school lessons, and subsidized the parents’ driving lessons. Joe even got Mr. Ricky a job. “They were really part of our family,” says Shellie.

Then the Bermans adopted another family in distress, this time a Catholic family from Brampton, Ontario that had adopted 19 developmentally disabled children. He was a caretaker at a school and she was a stay-at-home mom. Their aim was to mainstream the children and encourage their integration into society. Astonished and impressed by the couple’s commitment and the success of their approach, Joe gave away another house in a development in Orangeville, to serve as a country getaway for the parents and their kids.

“They saw this family with its enormous heart," Shellie recounts, "and they wanted to help.” 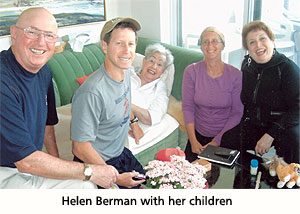 Joe and Helen gave another house in that development to a neighbor whose home burned down. They lived there for a year until they got back on their feet.

The mansion also became a second home to the couple’s cleaning lady from Italy, who after several years, fell ill and could not support herself. Her children were already Bermans by then, joining the family on summer vacations to Cape Cod and Expo ’67. “We never thought of it as anything special, to take the cleaning lady’s children on vacation with us,” says Shellie.

Both of her parents knew the names and life stories of every employee in the construction company; every cashier at the grocery store; every gas station attendant in the neighborhood; and every bank teller. “That’s just how they were,” says Shellie.

Never Too Late to Learn

It wasn’t until they were in their seventies that the couple really got into Judaism. After answering an appeal to help open an Aish HaTorah branch in Toronto, the couple started learning Torah. “The more they learned, the more they loved it,” says Shellie, recalling that when her father was too ill to attend lessons he used to participate via speakerphone.

In their mid-70s they koshered their home and began to observe the Sabbath.

“When it came to lessons about tzedakah, it was like, ‘I knew this,’ ‘I knew that.’ The learning was a validation of the way they had lived their lives until then.”

In their mid-70s they koshered their home, moved to a Jewish enclave in Thornhill, and began to observe the Sabbath. “It took a tremendous amount of courage for them to change their lives like that. They are living proof that you are never too old to change,” says Shellie.

“When I look at my parents and what they did in their lives, I just think it’s a huge inspiration. My parents are real heroes. They show what is possible for people with money, for people without money, for religious, and for non-religious. Every single person has it in their power to make the world a better place by giving. As my mom used to say, ‘God is like this voice in my ear; the trick is to listen to Him.'”

The Gift of Desperation

Where Am I Going?

No Baggage: A Guilt-Free Yom Kippur

A Jew's Response in Difficult Times

How Can You Command Someone to Love?
It Takes A Lot Of Faith To Be An Atheist
How Instagram Brought Back This Nostalgic Soup
What Makes Eli Run?
Comments
MOST POPULAR IN Spirituality
Our privacy policy