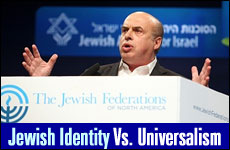 The choice between freedom and identity is a false one.

Natan Sharansky, the Jewish Agency Chairman, gave the following address to the General Assembly of the Jewish Federations of North America, Nov. 9th, 2009. Scroll down for video.

Twenty years ago to this day, the Berlin Wall fell. Two great wars were being waged in those years. The first was a worldwide struggle to free Soviet Jewry -- a cause which galvanized Jews across the globe as no other cause had, since the establishment of the State of Israel. The second was the Cold War, the struggle of free democracies around the world against the tyranny of Soviet style communism. In each struggle, the fall of the Wall became a turning point. Right after that fateful November day, a great Exodus of Soviet Jewry began in earnest. And within months, the totalitarian stranglehold over Eastern Europe disintegrated before our eyes.

The fact that a single event on the world stage -- the fall of the Berlin Wall -- was the culmination of both struggles is hardly coincidental. It seemed to be history’s way of saying that, in a deep way, the wars were not really separate; they were simply two sides of the same coin.

For years, I had been a foot soldier in both these great wars. In the years before my arrest I was in fact the unofficial spokesman of two movements -- a human rights movement pressing for democratic reforms in the Soviet bloc and Soviet Jewry movement seeking the right of Jews to become free. In those years I was often pressed by my comrades in arms on both sides to make a choice between these two wars. You have to decide, they said, are you the fighter for human rights for everybody or are you fighting for the rights of your own tribe? Do you belong to the world of universal values or to the world of nationalist? I must say, I personally never felt that I needed to choose. And not only because I enjoyed both these battles, But because I felt that they are deeply connected. That in fact it is the same battle. The battle for freedom and the battle for identity was the same battle for me.

From where did the strength to fight for freedom come from? I was one of many assimilated Jews only because the Soviet regime put it as an aim to deprive people deliberately of any loyalties to their faith, to their nation, to their family. As the official definition of citizenship stated clearly -- all Soviet people are cogs in the communist machine. And we as cogs knew that we are slaves. But we had no strength to fight. After all, the only value left for us was our physical survival and there was no reason to risk it.

In 1967, the Six Day War in Israel reconnected us with our people, with our country and history, and gave us pride for being Jewish.

When did this situation change? In 1967, the Six Day War in Israel reconnected us with our people, with our country and history, and gave us pride for being Jewish. We discovered our identity and this empowered us to fight for our freedom. But even then we small group for Jewish activists could never have survived in the struggle in the Soviet Union if it did not immediately become the struggle of millions of Jews all over the world. Why did these Jews for 20 years spend their time energy trembling for fear when they traveled to the Soviet Union to bring us books and bring us information from the free world and to press on their governments? Many times I heard from many of these volunteer emissaries almost the same phrase. We are from the same cities, and it is almost by chance that we are there and you are here. They were also returning to their "shtetl" and getting from there their energy, their passion to fight for our freedom.

I remember when the time had come to make the last blow and have a historic march on Washington I remember there were some voices of skepticism. Will big numbers of Jews really come to Washington in the winter for such type of demonstration? In order to dismiss these doubts, I went from city to city, from federation to federation, all together 30 of them. And the response was always automatic -- of course we will be there. Not to be part of that demonstration was like not going to the Bar Mitzvah of your family. It was a family insult!

In fact this demonstration of a quarter of a million Jews in Washington in December was probably the biggest family reunion in history. So the energy that was released from going back to your people was the driving force of the great struggle for freedom. In fact the Berlin Wall was brought down because proud Jews, proud Czechs proud Germans, proud Catholics, proud Pentecostal together with a proud army of Jews brought down the Berlin Wall.

That's why the choice between two battles was fallacious.

Today we live in the global, post national, post modern, post identity world where people of the free world again are asked to make a choice between universalism and nationalism, between freedom and identity. If you believe in the universal values of freedom and human rights, why bother to stick to your national or ethnic identity we are asked.

This question hits home in an especially difficult way for Jews. Doesn’t Judaism prize tikkun olam, perfection of the world at large, as its highest value? If we insist on being part of a Jewish state, does that make a mockery of our larger, universal ideals? If so, do we really want to shelter ourselves in a Jewish cocoon of a state? Why insist on staying part of a small tribe, when the great, global melting pot makes nationalities seem like nothing more than sentimental reminisces.

And when one young Jew believes that he or she must make choice, that you cannot belong to both, they make the choice in favor of universalism. And then assimilation erodes our communities. And then it becomes more and more difficult for the people of Israel to defend their Jewish state. And our detractors sense our hesitation and our weakness and multiply their efforts to delegitimize the State of Israel.

Then the most awful thing happens, a young Jew after months and sometimes years of standing in the face of extreme and false slanderous attacks on Israel, finally says: Enough. I want to live in the world without Israel.

It's frightening enough when our enemies talk about a world without Israel, but when a Jews says this, it is the greatest victory for our enemies.

Just like 20 years ago, this choice between freedom and identity is a false one. We must remind ourselves that the Iron curtain was brought down and hundreds of millions found their freedom only because we found the source of strength in our pride and in our identity. We must remind ourselves that we succeeded in building the democratic State of Israel and bringing the ideas of human rights and equality to the darkest places populated by tyrants and dictators only because we were empowered by thousands of years of dreams and prayers of Next year in Jerusalem. Today I speak here as the Chairman of the Jewish Agency. A Jewish Agency which connects between the Jewish world and the State of Israel and which together achieved great things and made history -- rescuing more than 3 million Jews from pogroms and persecutions. It was the Jewish Agency which coordinated the efforts of all the Jews of the world in helping to build a strong and modern state of Israel. And today of course we must always be ready, and we are ready, to continue to save every single Jew, to help everybody who wants to join us in Israel and to help every Jew in need wherever they are.

Our main battle today is to strengthen, to deepen, to build and to defend our Jewish identity.

But our main battle today is to strengthen, to deepen, to build and to defend our Jewish identity -- the identity of one people, those in Zion and those in the Diaspora. And in this battle it was proved again and again that we need one another. Today, Israel experience programs bring approximately one third of the Jewish people to Israel. Our aim must be to connect every young Jew with Israel and to connect Israel with every Jewish community of the world. Like in the Soviet Union in the past, we need a strong Israel. But Israel today needs strong Jewish communities.

We have to be able to reach every young Jew in the Diaspora and in Israel by Jewish education. Through schools, special courses, cable TV and internet. And we must find a way to make it interesting. And we must be together not only in our great partnerships with Jewish communities, but we must expand these partnerships to every campus in the world where the battle for the future of our young generation is taking place.