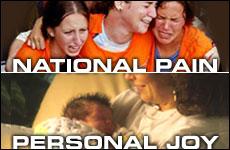 How to balance the elation of a new birth, while Jews elsewhere are suffering.

I recently gave birth to a baby boy. I have been feeling pangs of guilt, in that I did not fast for Tisha B'Av, due to some recovery complications from the birth and breastfeeding full time. So while I did the right thing according to Jewish law, I feel detached from the pain that the Jewish people are going through. I was unable to attend any of the large prayer rallies in connection with the Gaza disengagement.

So while I am elated and ecstatic over my new born, I wonder: How can a Jew allow herself to feel and participate in national pain, when they are experiencing personal joy? I am feeling guilty. Please advise.

Your question reflects truly admirable sensitivity, and at its core addresses the dialectic of Jewish existence: the ability and the necessity to cry and laugh at the same time. King David, the great psalmist, captures this sentiment when he exclaims: "We sat on the Rivers of Babylon (when we were taken into exile), and we cried when we remembered Zion.' Our captors demanded that we sing, but our hearts recoiled, "How can we sing the song of God on foreign soil?"

Collectively, since our inception as a people, whether on our own soil, or dispersed amongst the nations, we question whether we can sing, as long as our brethren, or members of our community, are in a state of suffering. Certainly, on a personal level, we wonder whether we can legitimately rejoice when a part of us is gripped in the unrelenting sorrow and grief of loss and tragedy.

We shatter a glass under the chuppah to remind us that our joy is not complete.

Nonetheless, the Torah exhorts us, under all circumstances, "and you shall rejoice in your holiday." Similarly, we are obligated to celebrate a wedding, even as we temper that joy with the shattering of a glass under the chuppah, to remind us that as long as Jerusalem is not fully rebuilt, our joy is not fully complete.

King Solomon, the wisest of all men, offers his immortal sage counsel, "There is a time to cry, and there is a time to laugh." We are called upon to juggle our emotions, to walk that fine line throughout life in an effort to achieve the appropriate balance. While on the one hand, we cannot ignore the pain, at the same time, we must be grateful for the blessings of the good. And we must sustain hope, born of the knowledge that it is the Almighty who is the choreographer of all events.

Song in the Cattle Car

A digression of a personal nature comes to mind. My father, of blessed memory, was a rabbi in Falteceni, a small town in Rumania before the war. It was on a fateful Friday morning, that the Nazis invaded the town and ordered all the men to report to the train station that afternoon. The men, to the horror of their grief-stricken wives, mothers, sisters and friends, were loaded into cattle cars with no indication to where they would be taken.

My mother, of blessed memory, pregnant with me, and clutching my 18-month-old brother in her arms, accompanied my father. As they tearfully parted, my father instructed my mother to hurry home to light the Shabbos candles. As the train, packed beyond human capacity, began to pull away from the station, my father looked out and realized that since the sun was setting, Shabbos was approaching. As the cries of the women and children echoed and pierced the air, my father, in the characteristic tradition of prayer, clapped his hands and began to sing the verse that precedes the Shabbos service.

A young secular Jew, standing next to my father, witnessed this incongruous scene, and with great dismay, nudged the fellow next to him for an explanation. He was told that the man singing was the rabbi of the city, and that the verse he invoked was a tribute to God that explained, "Let us give thanks to God, for His kindness is forever."

The train was taken to a labor camp, where they were required to do back-breaking work, day after day, from dawn until late at night, for months on end. Most of the inmates perished from disease and exposure, but my father was, fortunately, one of the survivors. The Russians, who were as feared as the Nazis, liberated my father.

Upon his return to Falteceni, my father was informed that the official appointed to govern the town was a young Jewish man, a doctrinal Communist. My father was also advised that this young governor had a baby boy born to him that very day.

The traumatized Jews pleaded with my father 'not to rock the boat.'

My father moved quickly into his rabbinic mode and insisted that he had to go and apprise the new father of his obligations as a Jew to circumcise his baby. The traumatized surviving members of the Jewish community pleaded with him "not to rock the boat," and to abandon this most preposterous plan. They pointed out that Communists have no use for God and religion, and that my father would be needlessly endangering his welfare and that of the entire community.

My father would not be deterred, insisting that he would jeopardize no one but himself. In the end, his attendant refused to let him go alone, so together they appeared before the governor at the appointed time. They were greeted and asked to sit down, and the official inquired as to the nature of their business. My father replied that it had come to his attention that a baby boy was born, and as leader of the Jewish community, he had come to wish him 'mazel tov,' and at the same time, inform him that as a Jew, the governor was obligated to have a bris for his child on the eighth day.

The official was silent, staring at my father. After a long moment, he said, "Okay, Rabbi. I will do as you say. But let me tell you why I will concede to your request. You don't remember me, Rabbi, but I remember you. I was standing next to you in that cattle car on that terrible Friday afternoon. I was there when, despite the captivity and the wailing of women and children, still echoing in our ears, you clapped your hands and began to sing your prayers, praising God for His kindness. For such a man as yourself, who demonstrates such awesome faith in the face of terrible adversity, I would do anything you would ask."

The story of my father, of blessed memory, is the story of every Jew. Adversity will not claim us. There are myriad accounts of heroism, of Simchat Torah dancing and singing in the bunkers and even the gas chambers. Despite our blood-drenched history, our song has never and will never be silenced, our celebrations never compromised, and our spirit never diminished. This is the strength of the Jew -- we persevere, we laugh, we sing and we celebrate through our tears.

The dear reader feels guilty at experiencing exhilarating joy at the birth of her baby, while concurrently Jews everywhere are mourning the loss of the Temple of old and the current painful dismantling of Jewish homes. I would suggest that there are many ways to express and register hurt, pain, and prayerful appeals heavenward. Undoubtedly, when you look at the innocent, trusting face of your newborn, your heart is bursting with love, and in that boundless overwhelming emotion, there is, unquestionably, an ache and a prayer that pleads that this precious child be privileged to grow up in a safer and better world.

Be assured that there is no prayer more powerful than that of a mother beseeching on behalf of her children, and when you importune the Almighty for a future -- free of hatred and strife, filled with loving-kindness and peace among men -- not only your child, but all of us are the beneficiaries of that prayer.

Clearly, the Almighty created a world in which all of us contribute in our own way. Consider the analogy of what it takes to negotiate a successful battle of war. It requires the input of many divisions -- generals, front line soldiers, strategists, those in charge of morale, supplies, etc. Each unit plays a critical role in an effective war effort and the ensuing victory.

A new soul in the world helps banish the bitter darkness with new energy and hope.

Similarly, each one of us can effect the changes we so desperately need in the context of our individual circumstances. The dear reader has countered and protested the destruction of both the past and present in the most meaningful way possible. She has brought a new soul into the world, and thus has committed herself to banishing the bitter darkness around us with the gift of new life, new energy, and new hope.

Understandably, it is for this reason that you were not only exempt, but also enjoined from fasting on Tisha B'Av. Your marching orders were different than those of others because your role in the battle for a sane world, is and specific to the priority of the moment. You have to conserve and build your strength for the crucial role you have to play. You are the soldier entrusted with the future, and that needs to be your exclusive focus.

The beauty of halacha, Jewish law, is that it helps direct our attention to where we need to be, and what we must do, at the different seasons and given times of our life. Trust that process. Go with its flow and you will find there is no contradiction between joining in the pain of your people, while taking joy and delight in your new addition. God willing, he will grow up to join the ranks of the Almighty's soldiers, and hopefully help bring us to the long awaited millennium of peace and blessing.

The Boastful Wife
What Makes Eli Run?
The Tyranny of Materialism
Science Enters the Mysterious Inner World of Consciousness
Comments
MOST POPULAR IN Family
Our privacy policy