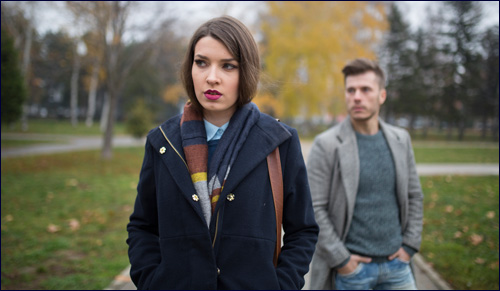 The Jewish man I broke up with is furious, but I don’t want an interfaith marriage.

I come here as a non-Jew to ask for your help and advice.

I'm 26 and was dating a great 27-year-old guy. After our first date, we both admitted there was something different about each other and we hadn't felt a connection like that before. Three months in to dating during a conversation about my family's background, he told me he was Jewish. I asked him straight away if that meant he should only be dating Jews and if he wanted to marry a Jew, and he said yes.

I called it off there and then. I explained to him that from my own parents' experience of interfaith marriage (despite it being a successful and happy one – they have been married for 30 years), I knew how hard it was, not only on the couple but on their parents and their respective families.

I believe I have only been respectful of your faith and what that means. I know I am an outsider and it is hard to know that despite the undeniable chemistry we shared, that still isn't enough. My problem is that he is so angry with me. He told me that my behavior was selfish and that we should just give it a go. He hasn't said anything about how he understands my point of view, and instead seems to be blaming me for the break-up.

I find this very hard and upsetting to deal with. I think I have done the right thing, despite missing him terribly and wishing it was different. I want to listen to him, but I have done a lot of reading and research and I know that the differences between my faith (Christianity) and his just seem too big to navigate.

Any advice or comments you have would be greatly appreciated.

We understand the emotional pain that prompted you to write to us. You chose to break up with someone you cared about deeply because your own life experience told you that continuing the relationship would be far more challenging than you wanted for yourself. Although that brave decision must have been heart-rending for you, the man you cared about couldn't see past his own immediate needs and accused you of being selfish, which made you question your own judgment. And that makes it harder for you to process your decision and acquire closure.

We believe that you were right to end your relationship, and not only because the two of you have different faiths and Jewish law requires Jews to marry within their own religion. Our conviction that you did the right thing also goes beyond the issue that that interfaith marriages are very challenging for both nuclear and extended families, even more so when the husband and wife strongly identify with their respective faiths.

You experienced these challenges when you were you growing up and feel strongly that you do not want to have them in your marriage, and that's a wise and valid reason for deciding not to continue dating a Jewish man, even though you feel a close connection to him.

There is another, equally compelling reason why you made a wise decision to break up. From the overall tone of your letter, it seems to us that you're dating with the purpose of finding the man you'll want to marry. But that is not the reason the man you were dating was going out with you. Why else would he tell you, three months into your relationship, that he was Jewish and wanted to only marry another Jew? His message was, "I don't view you as a woman I might someday want to marry."

We have no doubt that he likes you very much and that the two of you were developing a strong emotional connection, but from what transpired it seems to us that's all he expected from your relationship. He wanted to enjoy being boyfriend and girlfriend as long as it lasted, while you're looking for a permanent relationship.

The way this man is handling your break-up may show a side of his character that you may not be comfortable with. It's natural to be upset when someone we care about breaks up with us, and to say something hurtful in the heat of emotion and disappointment, such as calling the other person selfish. However, once we begin to process what's happened, we can often see the bigger picture, including why the relationship wasn't working for the other person. If the man you were dating continues to be angry about your decision not to "make a go" of something that had no future promise for you, if he doesn't realize that you feel sad and pained by ending things, and if he can't acknowledge that you had strong reasons to choose to stop seeing him, he may have a problem seeing beyond himself. That doesn't bode well for a long-term relationship and may be yet another reason why breaking up with him was a good idea.

It can be hard to get closure when you keep second-guessing your decision to end a relationship. Since you seem to be dating for marriage and you don't want a marriage with inter-faith challenges, you made a wise, though painful decision to respect your personal needs and preferences and stop dating once you learned you had different religions.

Add to this the fact that you're seeking a marriage partner and your dating partner didn't expect your relationship to lead to marriage, we hope you will able to move through the process of mourning the end of this relationship and acquire the closure you need to move on. Try to take with you the knowledge that you have the ability to form a close connection with someone, and that hopefully it will happen soon with someone whose life goals and values are close to your own.