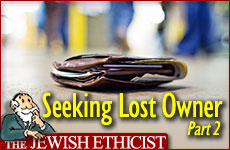 You have to keep lost objects a while, but not forever.

Q. I put up a notice regarding the lost coats I found, but nobody came to pick them up. What do I do now?

A. Last week we discussed what efforts need to be made to seek the owner of a lost object. This week we will examine what needs to be done if those efforts don't bear fruit.

As we saw last week, the Torah commands (Deuteronomy 22:2): "And if your brother is not close by, or you don't know who it is, gather it into your house and it shall be with you until your brother demands it; then return it to him."

Unfortunately, "until your brother demands it" could be a very long time. Furthermore, it is evident that not only do we have to take the lost object in; we also have to take care of it. After all, the above verse is talking about an ox or a sheep, which can hardly be stuffed in the attic and conveniently forgotten. Indeed, the mishna gives detailed instructions on what kind of maintenance is needed for each kind of object:

If he found books, he should read them once in 30 days. [Parchment needs to be aired every so often.] . . . If he found a garment, he should shake it out once every 30 days. And he can display it for its own benefit, but not for his use. Silver and copper utensils [which tarnish if not used] may be used for their benefit, but not [to the extent] they become worn. Gold and glass utensils [which do not tarnish]: he shouldn't touch them until the coming of Elijah [the prophet, who will come at the time of redemption and resolve our legal uncertainties]. (1)

It's beginning to sound like you are mortgaged for life to your lost coats. But from the previous mishna we see that things are not so bad:

Anything that both produces and eats -- let it produce and eat. And if it eats but doesn't produce, let it be sold. As it is written, "And return it to him" – examine how best to return it to him. What should he do with the money? Rabbi Tarfon says, he may use it. (2)

The inference from the verse seems to be from the word return it "to him" – the owner has to benefit from the return. If he has to pay for months of board for his animal there is nothing to return, so it would be better to just sell the animal and save the cost of keeping it. It also follows that anything easily replaceable may be sold right away, since there is no loss in getting the money instead of the object. (1)

The coats in your coatroom don't eat, but they do have some cost of storage, which you have the right to collect from the owner. Today it is not so common to ask the owner for money, but if watching the object becomes burdensome you can certainly sell them (for example to a second-hand shop) and keep the money in trust for the owner. If you can't sell them and you don't think the owner will pay the valuation you place on the storage, it is best to just give the clothing to charity.

To summarize: you should keep the coats for the few weeks when you are most likely to get in touch with the owner. Afterwards, it is praiseworthy to hold on to them longer on the chance that you will later find the owner; the Talmud tells a number of stories of sages who went beyond the letter of the law in keeping lost objects. (3) But if storage is a burden for you it is also permissible to sell the objects. If the owner is ever found, you can give him (or her) the money.