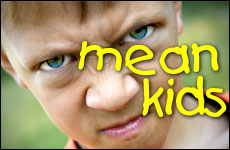 Teaching our children that cruelty and unkindness will not be tolerated.

The voice on the line was insistent. Though we had never met, she asked that I tell her story.

“I was sitting in synagogue on Yom Kippur, and behind me was sitting two little girls, around eight years old. I caught some snippets of their conversation and finally couldn’t hold myself back.

“Do you know Sarah?”

On and on they went, tearing this little girl apart.

I turned around and said to them, “Girls, you are talking lashon harah and gossiping about somebody, hurting her, in synagogue! Don’t you feel badly?”

The girls didn’t even pause to think.

And then one girl’s mother turned toward me and glared, as if to say, how dare you start up with my daughter!

On Yom Kippur, the holiest day of the year, we stand trembling before God, asking for forgiveness and a chance to start again. How can our children sit there and miss the message? Where did we go wrong?

I cannot begin to describe to you the calls and emails I have received through the years from parents in tears, as they describe the meanness that their children faced. From the five-year-old who had to change schools because she could not get one other child to join her for a play date, to the 13-year-old who cried himself to sleep because no one wanted to room with him on the eighth grade graduation trip.

For a holiday gift, her daughter asked if she could find her a friend.

A mother emailed me and told me that for a holiday gift, her daughter asked if she could find her a friend. It seems that her classmates decided that she was a ‘loser’ and when she sat down at the lunch table the girls who were sitting there got up and left, even those who had once been her closest friends. Both mother and daughter are broken hearted.

“Why was the First Temple destroyed? Because during its period there were three sins: idolatry, immorality, and bloodshed...But the Second Temple-we know that they studied Torah, performed the commandments, and did kind deeds-why was it destroyed? Because there was purposeless hatred among them.” (Tamlud, Yoma 9b)

During the time of the First Temple in Jerusalem, holiness and prophecy were found everywhere. You could actually see miracles manifested before your eyes. During the Second Temple there was no prophecy and no Holy Ark in the Temple, but the strength of our people was seen in our unity. We cared for each other. We cried for one another. It was when we reached the new low of petty bickering, humiliating and eventually even hating one another that we forfeited our Divine grace. Our oneness was lost and our magnificent Temple was destroyed.

Our Sages teach us that by loving one another again we have the power bring redemption and see the Temple rebuilt in our times. Until then, we have faced persecution, inquisition, Holocaust, and deep anti-Semitism as we’ve been exiled throughout the four corners of the earth. Perhaps being subject to the hatred of others would inspire us to once again be kind and compassionate toward each other. Maybe we would finally learn to cherish our brothers and sisters.

“Sometimes I ask myself if Hitler wasn’t right when he wanted to finish with that race, through the famous holocaust, because if there are people that are harmful to this country, they are Jews, the Israelites”
David Romero Ellner, Executive Director, Radio Globo, Honduras, Sept. 25, 2009.

This is not an ugly quote from years ago; this anti-Semitic rant is from this past September. Mr. Ellner has joined Hugo Chavez and deposed president Manuel Zelaya in targeting the Jews. Mr. Chavez has allied himself with Iran’s dictator, Ahmadinejad, as he hosts Hezbollah terrorists and seeks Iranian help in becoming a nuclear power. As we face venomous hatred and threats from leaders in Iran, news comes of brutal anti-Semitic attacks throughout Europe.

Why hate each other when we meet with so much hatred in the world? What a great tragedy!

It is time for us to teach our children that cruelty and unkindness will not be tolerated. Even if a child is not your friend, or ‘not your type,’ and “no one else is inviting her/him, anyway,” YOU must be kind. We are one people. There is no room for meanness in our lives.

We are one people. There is no room for meanness in our lives.

It is vital for parents to pay attention to our children’s character traits and ask ourselves these questions:

Recognizing our children’s character flaws is the first step toward creating compassionate children. If we are able to pinpoint the areas of weakness, we can then work on strengthening and building.

When your child has a birthday party or Bar/Bat Mitzvah, do not allow the ‘kids who no one likes’ to be left out. That’s mean. When your child is invited to a party of an unpopular classmate, be sure that he attends. I know children who were crushed, waiting hours anxiously by the door, as their parties were ignored.

We have come to measure our children through their success on and off the field, their popularity, and their grades. If they do well then we believe that we are raising successful children.

Children who are mean and unkind are not being raised successfully no matter how popular they are; or how incredible their straight A report card seems.

We can demand more from our children. We need to stop making excuses, stop blaming those who tell us that they have been hurt by our child.

Our children are capable of great kindness. Let’s take a stand together and teach our children that through caring about one another we can rebuild our Temple brick by brick, one kindness at a time, and eventually we can change the world.

7 Things to Say to Prevent Stress in Our Kids