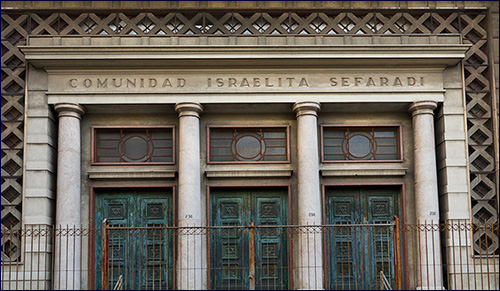 Some of the surprising, diverse places where, against the odds, Jewish life is flourishing.

Today the Jewish people have returned to their ancestral homeland where just over half of world Jewry resides. Here are some of the surprising, diverse places where, against the odds, Jewish life is flourishing.

Less than two and a half square miles, the rocky outpost of Gibraltar at the edge of Spain is an unusual place. A British territory since the 1700s, Gibraltar uses its own currency – the Gibraltar Pound – and locals speak the dialect Llanito, a mixture of Spanish and English – with some Hebrew influences thrown in. 30,000 people call Gibraltar home – as well as hundreds of Barbary Macaques, the only wild apes in Europe. 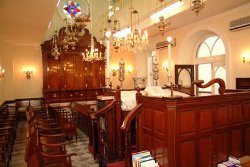 Jews have lived on Gibraltar for centuries, dating their presence to 1356, and today enjoy a thriving community of 750, with a remarkably well-developed infrastructure: four synagogues, a mikvah, a kosher coffeehouse, and separate boys and girls religious high-schools. Overwhelmingly Orthodox and Sephardi, Gibraltar’s community is growing by leaps and bounds, increasing over 25% since 2008, when the community started extending loans to potential Jewish immigrants to help them get settled on “The Rock,” as Gibraltar’s sometimes known.

A sparsely-inhabited, land-locked country in southern Africa, Botswana is perhaps best known abroad as setting of the popular Number One Ladies’ Detective Agency series. The largely-desert nation of 2 million is also home to southern Africa’s newest Jewish community, and the only one that is growing in size.

Approximately 100 Jews – many expats from Israel – live in Botswana’s capital, Gaborone, which has grown in recent years as economic reforms have transformed Botswana from one of Africa’s poorest nations into one of its most fast-growing. Shabbat and holiday services are held in people’s homes, and residents import kosher food from South Africa. In 2004, the community organized a governing body, the official “Jewish Community of Botwsana”, which is investigating the purchase of land for a synagogue or Jewish community center. Meanwhile, a heder, or Jewish school, has been set up for the young community’s approximately twenty children, ensuring a vibrant Jewish community in Botswana for years to come.

About 600 Jews today call Japan home, living in the historic centers of Kobe and Tokyo. The first Jewish settlers – mostly traders from the US, Britain and Poland - came to Japan in 1861. Settling near Tokyo, they moved to the coastal city of Kobe after the great earthquake of 1923. One of the earliest Jewish residents was Raphael Schaver, an American businessman who founded the Japan Express, the first foreign language newspaper in the country. Some of their descendents still live in Kobe today.

A second Japanese Jewish community rose in the 1880s in Nagasaki, built by Jews fleeing pogroms in Russia. The Nagasaki community soon became the largest in Japan with about 100 families. During the Russo-Japanese war of 1904-5, the community fled, bequeathing its Torah scroll to their brethren in Kobe. (One famous member of the Nagasaki Jewish community was Joseph Trumpledor, who lost an arm in the Russo-Japanese War: he went on to help develop Jewish defense forces in what was soon to become the Jewish State.) 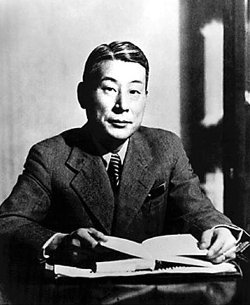 Kobe’s Jewish community continued to flourish in the first half of the 20th century, attracting Jewish immigrants from Russia, Iraq, Syria and Eastern Europe. During World War II, Japan’s Counsul General in Lithuania, Chiune Sugihara, issued exit visas for 2,000 Jews, routing them through Kobe; many Jews, arriving in the bustling Japanese port city – and seeing a thriving Jewish community there – decided to settle in the city. The city maintains a small Jewish community today: communal Shabbat meals are common, and there is one synagogue in the town.

Tokyo’s Jewish community is more recent, dating from the 1950s, when foreigners began flocking to the country to help the war-torn nation rebuild. A Jewish center was established in the central Tokyo district of Hiroo in 1952. Yiddish was the language spoken there, allowing Jews from diverse nations to communicate. A larger center was rededicated in 2009, catering to about 120 families in the capital.

Jews are thought to have lived in the South American country of Uruguay since the 1600s. Remains of a mikvah, a Jewish ritual bath, from that time have been discovered in Colonia, a rugged outpost thought to be the home of secret Jews during the Inquisition.

The modern community, however, dates from 1904 when Sephardi Jewish traders arrived in the capital Montevideo; Russian Jews followed in 1906. Uruguay’s first formal synagogue was dedicated in Montevideo in 1917, and the community grew as Jews immigrated from Europe and the Middle East. By the 1960s, Uruguay’s Jewish population had reached 50,000, one of the largest in the world. Since then, it’s declined, to about 20,000-25,000 members. Approximately 0.75% of Uruguay’s population of a little over three million is Jewish. 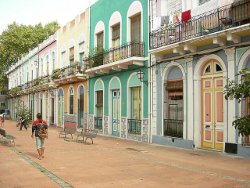 Nine synagogues and two day schools – educating nearly half of the community’s children – provide the backdrop to a vibrant community in Montevideo. Jewish Uruguayans have often held national office, including cabinet officials, far beyond their numeric representation in society. Ricardo Erlich, a prominent member of Uruguay’s Jewish community and leading biochemist, served as Mayor of Montevideo from 2005-2010, when he left that post to become Minister of Education.

In recent years, the southern Uruguayan city of Punta del Este has emerged as a major destination for Jewish vacationers. The town, which has a year-round population of about 9,000, has four synagogues, and sees an influx of 25,000 to 50,000 Jewish visitors each January, the height of South America’s summer. For a few weeks each year, Punta del Este gains a pronounced Jewish flavor, with Jews walking on the beach in town wearing kippot openly, a rarity in some Latin American locations. Israeli universities and cultural organizations hold events in Punta del Este then, and the Israeli Philharmonic has performed for the massive numbers of Jewish tourists.

Twenty years before the establishment of the state of Israel, Soviet leader Joseph Stalin set up his own “Jewish” country: Birobidzhan, in the far reaches of Siberia. Located in mosquito-infested swampland on Russia’s far eastern edge, as a buffer between the USSR and China, Birobidzhan was meant to be a Yidishe Avtonomne Gegnt, a Jewish autonomous region, with Yiddish as its official language. Yiddish schools were established, a Yiddish-language newspaper, the Birobidzhaner Stern newspaper serviced the region, and street signs and official theatres and schools were all in Yiddish.

The old synagogue in Birobidzhan, the capital of Russia’s Jewish Autonomous Region.

The project attracted relatively few Jews: around five Soviet Jews moved to Birobidzhan when it was established in 1928, but the territory’s unwelcoming location made it an unappealing place to live. 1934 saw the peak immigration to the Jewish region, with 5,250 Jews moving that year, though most left soon afterwards.

A few thousand Jews remained in Birobidzhan until 1991, when most left after the fall of the Soviet Union. Today, the capital city of Birobidzhan has a Jewish population of about 5,000 (out of a total population of 76,000). The town’s main avenue is still named Sholem Aleichem Street, and a statue of the Fiddler on the Roof stands outside the local symphony hall. The Birobidzhaner Shtern continues to print two or three pages each week in Yiddish, but times have changed: the editor is not Jewish; the daughter of Cossacks, she learned Yiddish in college. The New York Times has called Birobidzhan a “Jewish Disneyland”: “a city that often seems to have the religious authenticity of a pizza bagel with pepperoni”.

Jewish traders first settled in this Central Asian nation bordering Iran in the 5th Century, though the first permanent Jewish settlement dates from 1730, when a local king allowed Jews to purchase land in his northern Azeri kingdom: Jews bought and area known as “Red Village”, which remains a bastion of Azeri Jewish life to this day. Home to 4,000 residents – all of whom are Jewish – Red Village is prosperous town of brick and stone houses, cafes, three synagogues, and a Jewish school. The entire city comes to a peaceful halt each week, as businesses in the town close for Shabbat.

Azerbaijan’s capital city, Baku, a two-hour drive away, is home to about 10,000 Jews. Azerbaijan’s Government is encouraging their expansion: President Ilham Ilyev paid for a new synagogue in the capital in 2012 (bringing the number of synagogues in Baku to three) and fully funds the capital’s two Jewish schools. (In the Red Village, Azerbaijan’s government pays for the heating and oil in the synagogues and schools, as well.)

A Shiite Muslim nation, Azerbaijan nonetheless conducts a flourishing trade with Israel, totaling $5.5 billion annually. Many of Azerbaijan’s most prominent citizens are Jews, including the Nobel Prize physicist Lev Landau, chess master Garry Kasparov, and writers Essad Bey and Kurban Said, who wrote Azerbaijan’s most famous novel, “Ali and Nino”. Azeri Jews have made their marks in Israel, as well, including such well-known figures as the famous Israeli singers Sarit Hadad and Yaffa Yarkoni.

Let’s hope we soon see the day when all Jews come home together in Israel, bringing the beauty of their various traditions with them.

Four Perfect Pebbles: Clinging to Hope in Bergen-Belsen
Scientific Curiosity and the Divine Encounter
Mind Over Milkshakes
Love the Convert
Comments
MOST POPULAR IN Israel
Our privacy policy
Aish.com Is Looking for Great Writers