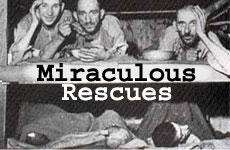 Any survivor has at least one miracle story. My father has several.

“My dear, precious child.” That’s how my father would always greet me every day when we spoke. One of my strongest childhood memories is of our weekly walk to shul on Shabbat morning. I used to love to get up early and go with him, hearing stories and riddles with a few math problems thrown in.

When our conversations ended with his painful passing, I wondered: How did he survive such horrors of the Holocaust, and maintain such a positive approach? It seems that my father's love of Torah and Judaism -- implanted in his youth -- sustained him, especially as he saw God's hand rescuing him again and again.

Shmuel Stimler was born in Rzeszow, Poland in 1923, into a chassidic family. Rzeszow's pre-war population was 50 percent Jewish. He studied in the local one-room “cheder” (Torah school). From among all the schools in the area, my father and one other student were selected to be tested for the famed Chachmei Lublin yeshiva, a prestigious post-high school academy for Torah study. In the summer of '39, my father passed the entrance exam. But his dreams were crushed by the outbreak of World War II.

My father was snatched from death many times during the war years; in retrospect, he realized that this series of personal miracles began when he was quite young. As a young boy, he once tried to fix a cigarette lighter. In those days, it was a small container filled with kerosene, with a bit of cotton and some type of flint attached. He didn't realize that while he was working on it, he was getting drops of kerosene on himself. With his clever mind and capable hands, he was able to ignite it -- but when he did, he himself burst into flames. His mother was nearby and she grabbed a quilt and pushed him onto the floor, smothering the flames. Miraculously, he wasn't hurt.

Any survivor of the war has at least one story to tell of being rescued. My father had many such miracles happen. At one point when he was in a concentration camp, there was a call for all-able bodied men. Everyone assumed that whoever was not included would be killed off or, at the very least, that the stronger men would receive better treatment or working conditions. My father joined the line of men hoping to be selected, but was told to go back, as he was too weak. Determined to join, he tried once more to pass the selection. Again, no luck. To the horror of all, the selected group of strong men were taken and murdered. My father's life had been spared.

The bunkmate pulled a knife out and slashed my father in the knee.

Everyone in the camps knew that going to the hospital was often a one-way trip. Only very desperate people went in. My father was climbing into his bunk bed one night. Conditions were very crowded, and the fellow in the lower berth didn't appreciate the disturbance. He pulled a knife out and slashed my father in the knee. My father tried to stop the bleeding and care for it on his own, but infection had set in and he was frightened. He was afraid to enter the hospital, and afraid not to.

As his knee got worse, he decided to go in. To his great relief, the nurse greeted him warmly. "Shmulik! You are here? Don't worry. I was a good friend of your mother's. I'll take care of you and watch over you until you regain your strength."

The next miracle came in a hidden way -- initially, he didn't know what had happened. He was standing among a group of prisoners, and his number was called. He went to join the group he was directed to, not knowing what he had been selected for. He saw someone he recognized and inquired, "What will become of us? Where are we being transferred to?"

"You don't know?" his friend was taken aback. "We have been selected to work for Oscar Schindler. Didn't you pay to get here?" My father was added to the now-famous 'Schindler's List'. He found out that others had bribed, fought and done whatever they could to get in. But for him, his number had just been called. To quote my father, "I was selected from out of 25,000 people! Truly a miracle."

On another occasion, Schindler personally saved my father's life. One day, my father and a few inmates were sighted committing the “crime” of cooking some potatoes. A Nazi guard came over, and all managed to escape -- except for my father. The Nazi began to beat him, when suddenly Schindler saw and quickly called the Nazi over. Reluctantly, the Nazi stopped, promising my father that he'd return and “finish him off.” Thank God, he never did.

After the liberation, my father was snatched from death one more time. He returned to his hometown of Rzeszow with some friends to see if any Jews were left. A kindly neighbor saw him, and exclaimed, "What are you doing here? There are no Jews. The townsfolk will kill you if they see you! Run away!" So he and his friends headed for Krakow, thinking that in the big city, matters were under control. Initially, they appeared to be; the group was given a house, albeit a dilapidated one.

On Shabbat morning, after the prayer service, they heard shouts and screams. The building was surrounded by what seemed like thousands of Poles -- men, women and children. They were screaming out murderously, "You gassed all the Polish people in Auschwitz -- now you have returned for our children's blood to bake your Passover matzah! We will murder you!"

My father was in shock. "Did I survive the war, only to be killed here?" He and his friends ran up to the top floor, as the crowd threw bricks and rocks and prepared to storm the house. This time, God's life-saving messengers were the Russian soldiers. They came with guns and dispersed the crowd. The soldiers also guarded the house for the next few weeks, after which my father and his friends made it across the border to the safety of the American side. To his good fortune, he was able to be in the DP camp of the Klausenberger Rebbe, a saintly man who nurtured thousands of broken souls. All his life he retained fond memories of the time there and how it had lifted his mood and outlook.

At this point in time, my father's aunt had a dream where she was visited by her dead sister -- my father's mother -- who had come to ask her, "Please take care of my son!" When the aunt told her husband, he was not impressed. "You keep thinking about the entire family, so you had such a dream. It's nothing."

Imagine their great surprise when they received a letter from my father a few days later! They wanted to take him in, but at that time it was very hard for refugees to enter Belgium, where the aunt and uncle were living. This aunt, a clever woman, contacted a smuggler, telling him, "I cannot afford to pay you cash to bring in my nephew, but I can give you names of former residents of Belgium to use in your smuggling operations." A deal was struck, and my father was brought in and welcomed into their home.

My father's years of suffering were finally over, but he never forgot them, and never forgot the memory of the family he lost, all so brutally murdered. Despite all he went through, his faith in God stayed firm. This faith gave him the strength both to survive and to rebuild his life afterwards.

My father married, and dreamed of living in Israel, but when the opportunity came to emigrate to America with its greater opportunities for earning a living, he took it. My father worked long, hard hours as a butcher for close to 40 years. Suppliers, customers and employees all appreciated his friendly, easy-going nature.

When I got married and moved far away, our relationship was restricted to the phone lines; but we kept in touch regularly. Years passed, and my family decided to move to Israel. My father was very enthusiastic about our decision and told us, "You go, and we will follow!"

In the summer of 2005, they surprised everyone when they fulfilled their dreams and made aliyah. To say they never regretted their decision would be putting it mildly. Once they came, I saw my father regularly, and we spoke daily, learning Torah together on the phone.

My father loved people of all ages, and enjoyed sharing his knowledge. Snatched from death several times, I can only imagine that God wanted to grant us the benefit of his inspiration and guidance until his passing, at the age of 85. His example lives on through his kindly words and deeds in the hearts of all those who knew him.

Tova Younger, daughter of holocaust survivors, lived with her husband and children in LA for over 20 years, working in various positions; candy distributer, teacher and babysitter, to name a few. To their great joy, their first 3 children got married and settled in Israel - they decide to join them.. There Tova became a freelance writer, while she and her husband continue raising their family.

Quest of a Lifetime

Angels in the Dark

The Boxer of Auschwitz: Fight or Be Killed
The Jewish History of Prague
Why the Sexual Revolution was Bad for Women
The Princess: Sukkot
Comments
MOST POPULAR IN Holocaust Studies
Our privacy policy
Aish.com Is Looking for Great Writers