Will It and It Shall Be 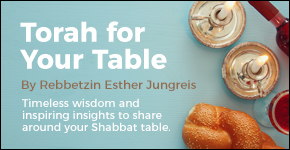 "Every man whose heart inspired him came; and everyone whose spirit motivated him brought the portion of Hashem for the work of the Tent of the Meeting, for all its labor and for the sacred vestments." (Exodus 35:21)

The previous parshiyos have dealt with the construction of the Tabernacle and all the various vessels and furnishings therein. God commissioned these articles with specific measurements and designs, and the people were responsible for their execution. The question that must occur to all of us is how it was possible for a nation of slaves who for generations had been in bondage, and who had no artisans among them, to create such an intricate and magnificent structure as the Tabernacle. Where did they gain the know-how and the experience?

The answer is to be found in this parashah: "Every man whose heart inspired him came...." If we truly desire to fulfill the will of God, if our hearts burn with fervor for His sake, then God will remove all obstacles from our paths, and enable us to achieve the impossible. We have an enormous power within ourselves of which we are not even aware, and that is faith. Indeed, if we have faith in our Heavenly Father and seek to fulfill His will, He will enable us to tap energies and abilities that we didn't even know we possessed. We need only act upon our dreams and they may well become reality.

We see this throughout history. Consider Bitya, the daughter of Pharaoh, who went to the Nile to bathe.1 She saw the basket in which the infant Moses was hidden, floating in the water. She attempted to save him, but her arms couldn't reach the basket. Nevertheless, she extended her hand, and when God beheld her genuine yearning to save the infant's life, He miraculously allowed her arms to extend and bring the basket to shore.

In the days of King Saul, the malevolent Philistine giant Goliath came to menace the Jewish people.2 The nation froze in terror. King Saul offered his personal armor to anyone who would battle the monster, but no one had the courage to take up the challenge except David, the young shepherd. Saul was much taller than David, and it was ludicrous to imagine that he could wear Saul's armor, but miraculously, when David donned that armor, it fit like a glove! There are many more such examples, but the teaching that we must absorb is that if our hearts soar with faith and love of God – if we truly desire to serve Him – miracles can take place and God will enable us to achieve that which only yesterday appeared impossible. Let us never feel intimidated when undertaking mitzvot. If we truly desire it, God can give us wings to soar and energy to accomplish our task.

In the opening verse, "Vayakhel Moshe – Moses assembled,"3 Moses gathers the entire congregation of the Jewish people. The word "Vayakhel" gives us pause. Usually the text reads "Moses spoke" or "Moses commanded." However, "Vayakhel" was the rallying cry calling the people to fashion the Golden Calf, and now the time had come to make tikun - to rectify that grievous wrong. The very same words that enticed the nation to sin are now used to summon them to perform the sacred task of constructing the Tabernacle.

Thus, the "Vayakhel" of the Tabernacle comes to make atonement for the "Vayakhel" of the Golden Calf; that is the true essence of teshuvah - to convert our sins into mitzvos and to harness all our energies in the service of God. For example, if one was in the habit of speaking lashon hara and has an awakening – a moment of truth – he should not retreat into silence, but rather now use the very same energy with which he formerly maligned others to convey words of Torah, chesed, kindness, and blessing.