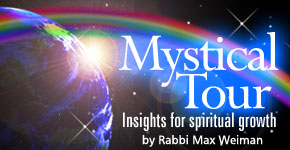 The Torah speaks of the Jewish people as destined to be the emissaries of the Almighty in the world. What land does the Infinite Being promise to this nation? What broad expanse would properly fit the people commanded to fulfill the will of God, being a light unto the other nations. The continent of Europe? Asia? North America? When you look at the globe, what would best fit this nation and its mandate?

Israel. The land of Israel. Hmmph! That postage stamp of a country? And yet, after thousands of years, that tiny little plot of land continues to be front-page news all the time. That small spot is the object of debate amongst the most powerful countries and at the U.N. What magic makes this puny plot of land demand so much attention?

This is one of the indications that the Torah has to be Divine. No other explanation seems reasonable.

In Numbers chapter 34, the Torah describes the biblical boundaries of the Land of Israel. (They are similar to today's boundaries, but go farther north.) And now, after 2,000 years of exile, the Jewish nation is back in its homeland. This also is an indication of the divinity of the Torah.

Not only that, but it was prophesied that Israel would be desolate all the years of exile; no nation would make it flourish (see Leviticus 26:32-33). It was further prophesied that in the end the Israelites would be back there (see Jeremiah 16:14-15). The barren desert-like land now produces fruits and vegetables that are sought by other countries. Their technology rivals and sometimes surpasses the most advanced societies.

If any normal person had predicted this during the past 2,000 years, they'd have been laughed at. Yet that's exactly what happened.

"Light" is often used as an analogy to Torah and the Jews. A light source does not take much space up in a room, but affects the whole area. As it says in Tanya (ch. 12), "A little light dispels much darkness." A human being is a small thing compared to a mountain or Niagara Falls. Yet one person can affect the entire world. Galileo, Newton, Einstein. Aristotle, Confucius, Gandhi. Thinkers, doers, philosophers and inventors. So many different kinds of people have the power to change the world. For better or for worse.

"What is man that you consider him?" King David said, "Yet you made him just a little less than God Himself."

Don't underestimate your own ability to affect the world. You may be one small person, yet your ability in this world is tremendous. And you just might be a catalyst for someone else to achieve their potential.

Aside from the nature of the world that supports the concept of something small affecting something large, there is also the factor of the Almighty helping in your undertaking. After all, if the weakest, feeblest, silliest, wimp had a strong enough desire to fix the problems of the world, and the Almighty decided to help him, is there anything this wimp couldn't accomplish? If the Infinite Being decides to help you, is there anything you couldn't accomplish?

The Talmud says, "Make His will your will, so that He'll make your will His will" (Avot 2:4). If you want the right things, there's a guarantee of Divine assistance.

What's stopping us from accomplishing more?

We're probably a little too focused on our own desires.

Pick one small thing that you believe the Almighty would want you to do, but you are afraid you lack the ability to accomplish it. Ask God to help you and see what happens.