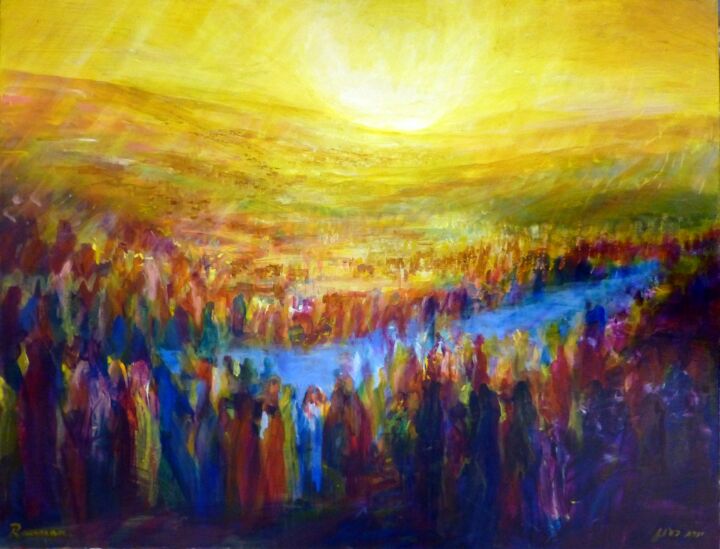 The descendants of Reuben and Gad had an extremely large number of animals … They spoke to Moses and to Elazar the Kohen and to the princes of the community, saying …"The land that God struck down before the Congregation of Israel is a land for livestock, and your servants have livestock." They said, "If it pleases you, let this land be given to us as our permanent property; do not bring us across the Jordan."(Numbers 32:1-5)

The tribes of Reuben and Gad asked Moses if they could settle on the eastern side of the River Jordan because it provided lush pasture. Moses responded angrily and called on them to cross over the Jordan with the rest of the nation to fight for their land. In response, they dutifully vowed to leave their cattle and families behind and proceed into the Promised Land with the other tribes. Only after all the land had been conquered would they cross back over the Jordan.

The painting captures the royal colors of the tribes on the eastern side of the Jordan bracing themselves to go to war. The dark colors reflect the negative side of their action which, according to the midrash, showed that they loved their wealth more than the Land of Israel.

Cave of the Patriarchs