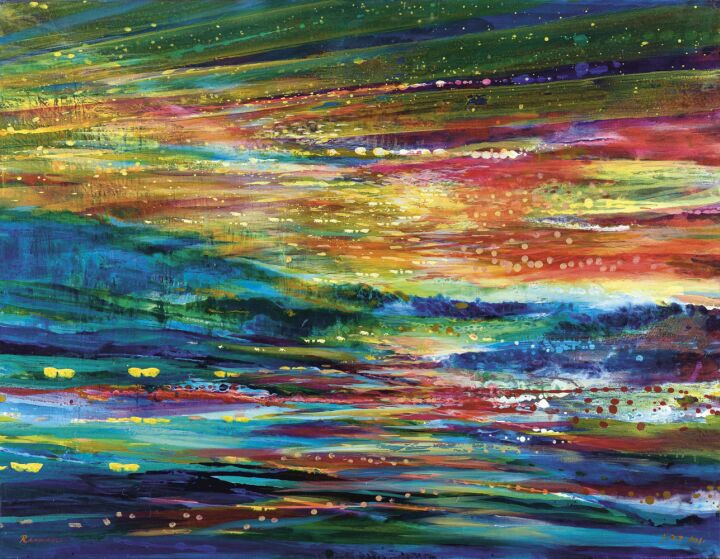 "Rainbow Landscape" captures the colors of the rainbow spectrum, while at the same time there is a heavenly feeling created by the suggestion of stars and constellations. The painting contains the seven major colors of the rainbow: red, orange, yellow, green, blue, indigo, and violet. The three primary colors - red, yellow and blue - are especially strong, the varying shades of red energizing the painting with a sense of passion. The yellows give the painting luminosity and, like the sun, stimulate and add optimism and brightness. The blues add a calming effect and a sense of serenity. And then the combined yellow and blue create green, the color of nature, adding harmony and balance.

In Jewish tradition, however, the rainbow has meaning and significance deeper than its beauty. This concept is reflected in the verses above in which the word "covenant" is mentioned five times. The Flood could be seen as a kind of war that God declared against man, while the rainbow represents a cease-fire and a promise. It is viewed as a symbol of peace between heaven and earth, between God and His world. Ever since, the rainbow is regarded as a sign from God painted across the sky to testify to His promise that He will never destroy the world by a flood ? a covenant of peace between God and humanity.

Back to the Land