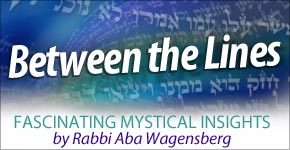 This week's Torah portion opens with the following statement: "Noah was an ISH (man) TZADDIK (righteous person) TAMIM (who was completely righteous)" (Genesis 6:9). The word ISH is a compliment in its own right, and the additional descriptions heap honor upon honor on Noah. No other personality is described with so many consecutive praises in one verse!

The first verse in the Book of Psalms teaches: "Fortunate is the man (ISH) who has not gone in the counsel of the wicked, and has not stood in the path of sinners, and has not sat in the company of scoffers." The Midrash Socher Tov, in the name of Rabbi Yehuda, comments that the phrase "Fortunate is the man (ISH)," refers to Noah, since Noah is called ISH, as in our parsha.

Why is Noah described as "fortunate"? According to the Midrash, Noah was fortunate in that he did not follow the ways of the three categories of people (wicked, sinners, scoffers) cited in Psalms. These three negative categories correspond to the three generations that arose in the world over the course of Noah's lifetime: the generation of Enosh (Adam's grandson, who initiated the practice of idolatry); the generation of the Flood (immersed in immoral behavior); and the generation of the dispersion (who built the Tower of Babel in order to wage war against God). It was Noah's good fortune that he did not go in the path of any of these three generations.

The Midrash teaches us that Noah spent his entire life surrounded by evil and wickedness, yet he managed to make himself into one of the most righteous people who ever lived. This is a remarkable feat. How is it possible for a person to maintain such a high level of spirituality while surrounded by an environment of depravity and corruption?

A passage from the Talmud will help us resolve this question. Ben Zoma says, "Who is a wise person? One who learns from everyone" (Avot 4:1). This is a strange statement. It seems reasonable for us to want to learn from righteous people - but what is wise about learning from the wicked?

The Berditchiver Rebbe remarks that righteous people are able to perceive positive qualities in even the most negative situations. From everything they encounter, they learn how to serve God better.

For example, if a righteous person were to witness someone passionately engaged in sinning, he would recognize and appreciate the tremendous motivating power of passion. However, instead of taking that power and using it to accomplish negative goals, the righteous person would redirect it for a meaningful purpose. The correct channeling of passion has the potential to change rote, sterile performance of God's mitzvot into mitzvah observance driven by enthusiasm and fire! (Kedushat Levi, end of Parshat Bereishit)

Noah epitomized this ability to channel negative forces toward a higher purpose. A hint to this idea is found in his name. The Torah tells us (Genesis 6:8) that Noah found chen (favor) in the eyes of God. The name NOAH (nun-chet), when reversed, spells CHEN (chet-nun)! Noah found favor in the eyes of God by mastering the art of reversal. He had the ability to redirect every energy from a negative goal to a positive one.

This is why a wise person learns from everyone. Instead of being corrupted by his evil generation, Noah used it as an opportunity for spiritual growth. He had the "best" teachers available! All Noah had to do was learn to take their ingenuity, arrogance, passion, jealousy and zeal, and use them in a productive, constructive way to get closer to God.

May we all learn how to transform the power of every energy and drive into positive action in order to become the best we can possibly be.