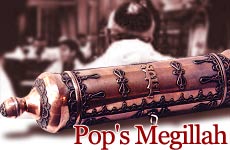 Did my grandfather realize that his proud and sturdy Megillat Esther would 100 years later be treasured by his grandson whom he would never meet?

Wayne, New Jersey. The makeshift traffic signal flips to green and the noise level in the shul races from zero to sixty. Graggers flail wildly in the hands of four-year-olds, accompanied by the foot stomping and bench banging of those too old to wave a child's toy, but eager, nonetheless, to drown out the name of the evil Haman.

After a half minute of chaos, the redheaded girl on the bimah, displaying the deftness of a future cheerleader, twirls the two-sided signal and it becomes a red light again. True silence is never achieved, but it is time for the congregation to quiet down so the reader can proceed reading the Story of Esther.

Red light -- stop! Green light -- go! I am oblivious to the mayhem around me because I am focused on another story of Purim, my Purim, which is found in a 19th century pencil-high brass cylinder that contains "Pop's Megillah.” Pop is gone now; he has been for over 12 years. But on Purim I am by his side like on no other day of the year, not even his birthday, not even his yahrtzeit.

On Purim, I am seated beside him some 35 years ago in a Bronx Shteibel not far from Yankee Stadium. Fussing uncomfortably on a splintered dark brown bench, I listen as the bearded, aged chazan chants the Story of Esther from beneath a yellowing tallis. I watch as my father's eyes move rhythmically with the chanting from right to left, right to left, so as not to miss a single word of the telling. Although I am a mischievous eight-year-old boy, I know not to disturb my father for he is a traveler as well.

Is he in the land of Shushan along with other Jews on a spiritual pilgrimage of hope and inspiration? Maybe for a minute or so, but more likely he is in the Warsaw suburb of Pelcowizna, where as an eight-year-old, he too sat next to his father, a learned craftsman, jeweler, and scholar who commissioned a handsome sum to have his megillah created so that on Purim, he could bask in the luxury of his heritage.

Does his father, my Grandpa Mendel realize that his proud and sturdy Megillat Esther would one day find its way to the Golden Medina and that it would be treasured by his grandson whom he would never meet? He very well might have, because he also fashioned by hand a sturdy brass cover for his megillah that has served as its protection across the many miles that it has traveled.

This "cover for memories” exhibits the dents and black marks of its age, but in addition to protecting the megillah, it joins with it to offer me with a deep attachment to the holiday and a still growing connection to my father and his father as well. For no matter where I may be on Purim, I hold fast to it like a relay runner holds his baton, knowing just how precious it is within my grasp.

As dad rolls the megiallah, the letters and the history glide past.

As the reader ends the chanting with the words "l'chol zaroh,” the little redhead puts down her traffic light and I return to the Bronx shteibel along side my pop. His smile is one of deep accomplishment. The reading is finished and we begin our task of rolling the megillah back into its case so it is ready for next year. The task of rolling is quite methodical and precise. I hold onto one side by the corners as my dad, rolls the delicate parchment as tightly as possible without adding additional stress to its aged body.

If not done right, the megillah can't fit back into its brass covering and we must unroll it and begin again. As dad rolls, the letters and the history glide past. Its small rips and discoloring indicate not only the years gone by, but more so, that this is one well-read megillah. I cannot imagine one year out of the last 100 that each word of this megillah has not been pored over and savored. One day it will be my turn, and I will continue the chain. "But where are the vowels?” I think. "How am I going to possibly follow the reading without the vowels?

It is March of 1990. Pop is gone now. There was never any hankering over his possessions. I simply tell my brother, Mark, that I need the megillah and he understands. I take the megillah with me to an early morning reading at New York's Garment Center Congregation. I am among friends as these are the men with whom I have said Kaddish in the year following my pop's passing. I proudly show them its brass cover. I remove the megillah and share with them its wrinkles and its smells. They listen intently as I tell them about its previous owners and they smile for me.

The rabbi begins the chanting. "Vayihi Bemai Achashveros... It happened in the days of Achashveros. " It takes more concentration than I have ever given anything, but I am following along without vowels. I forego the gragger and I especially forego any side conversations. I pray that I don't have to sneeze for if my eyes leave the megillah, I will surely lose my place.

My place is back in the Bronx next to my pop, listening to a story that has been told over and over again on this exact day. While I treasure many of his possessions, it is a special joy knowing that I can share an exact moment, every year, when our eyes focus on the same small letters, our hands hold onto the same weathered parchment, and our children understand the importance of it all.

My place is the D'Arcy Street Talmud Torah in downtown Toronto where my father and his family lived for 12 years because the Land of the Free had limited visas available to Polish Jews. My place is back in Pelcowizna at a time of Jewish prosperity and peace, before the world caved in on us.

My place is on a long line of Jews who live during times of anti-Semitism and despair when no less than our very survival is at stake. Times when God hears our calls and inspires us and helps us in our struggle; times during which we hope that we finally will be able to live in peace among the nations of the world.

My place is on this line behind my Pop and Grandpa Mendel and in front of my sons for whom the three of us pray daily. The hope lives on in all of us, and until our vision of peace is fulfilled, I hold onto some memories and I smile.

Len Blaifeder is Director of Advertising for a Commercial Bank in New York City. He lives with his wife and three sons in Wayne, New Jersey where he is a member of Congregation Shomrei Torah.

Stalin and the Purim Present
The Promise Of The Land
Which Chat Are You On?: Parshas Behar/Lag Ba’Omer
Do You Like Slow-Cooked Food? Thank the Jews
Comments