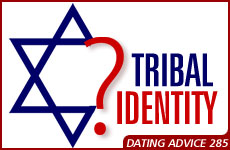 She has little attachment to her Jewish roots. Is this a deal-breaker?

I am a man with a strong sense of Jewish identity, who has been dating a Jewish woman. We've been having a nice time and she has many wonderful qualities. But I'm concerned about the fact that her father is not Jewish, and she has very little sense of what it means to be Jewish.

Although I am not observant, my Jewish background includes four Yiddish-speaking grandparents, 10 years of Jewish summer camps, some knowledge of Hebrew, a connection to Israel (including relatives there), and a circle of friends who are all Jewish. The woman I'm dating doesn't have any of these.

I want to raise my children Jewish, and she's agreeable to that. But I'm concerned about her lack of Jewish background, and that she doesn't identify Judaism as a major theme in her life. Plus, if we marry, our children will be three-quarters Jewish.

What do you think? Is there a basis for a relationship leading to marriage?

The situation you describe isn't as uncommon as you might think. We often hear from people who define themselves as secular Jews who have a strong sense of being Jewish, and who wonder if it will be possible to envision a future with another person who is Jewish by birth but has no feelings or connection to their heritage.

The answer is that it won't be easy. One of the first foundations of a strong marriage is compatible values and goals. Your Jewish heritage is very important to you, and you state a desire to raise your children as Jews. Even though the woman you are dating doesn't object to this goal, the fact that she doesn't feel one way or the other about it will eventually become an issue should you decide to marry. You won't share a basic value on which you hope to build your married life.

As time goes on, it can become a serious bone of contention. You may find yourself missing her support and input about setting an underlying Jewish atmosphere in your home, how you will celebrate Jewish holidays and lifecycle events, and how to educate your children Jewishly. All this will likely affect the choices your children will make about their own spiritual philosophy and choice of dating partners. These differences can become a source of continual frustration.

In addition, there's something else to consider. Most adults become more spiritual as they leave their early twenties, and many secular Jews find themselves wanting to incorporate Jewish traditions and practices into their lives as they get older and as their families start to grow. (See Doron Kornbluth, Why Marry Jewish - Surprising Reasons for Jews to Marry Jews, Targum Press). Since you already have strong Jewish feelings, it's likely that in time, these will continue to grow and intensify. Someone who doesn't have a similar basic orientation may resent the direction in which you are moving, or may want to move in a different direction herself, and this can become a bone of contention.

This doesn't mean that the relationship cannot work. We know of many instances where someone who was raised with little Jewish knowledge or interest decided -- because Judaism was very important to the person they were dating and cared about -- to start learning about their background. Their interest was piqued, and they continued to learn more and to incorporate Judaism into their life.

But this is not something you can count on. You can't go into a courtship expecting, "Maybe I'll change her," and you can't be disappointed if she doesn't express any interest in learning about Judaism. It's preferable to choose dating partners who seem to have similar values to your own.

In this case, however, since you've already begun to date someone who has most of the qualities you are looking for, but doesn't have that Jewish connection, we suggest exploring this area with her during one of your earlier dates. You can explain how much you value your heritage and how important it is that your wife be open to learning about her heritage and growing Jewishly.

See where the conversation goes. If she expresses an interest in learning more, either because it is important to you or because it's something she's curious about, you can suggest a few potential resources and then take things one step at a time. But if she rejects the idea, you have to respect the fact that this is where she is at this point in life, and understand that by pursuing a courtship you are inviting frustration and resentment.

•  Our first suggestion is to recommend that she take some Judaism classes. Every major city today offers dynamic Jewish adult education; check the Aish Directory for a location near you.

•  Especially for someone with little Jewish background, we recommend the one-day Discovery Seminar. This provides an excellent framework and overview of the entire gamut of Jewish history and philosophy -- and it answers the question, "Why Be Jewish?"

•  You could suggest that she read one of the books from the "Essential Jewish Library." You could even buy her a book as a gift.

On one hand, it's best if you engage in the learning together with her, to encourage her and to see how you relate to these topics together. On the other hand, it's important to remember that she shouldn't be doing it "just for you." After the chuppah, and over time, her enthusiasm could wane if it wasn't truly self-generated. Of course, a person's interest in Judaism could wax and wane for a whole variety of reasons; but a couple should always try to do what they can to minimize the possibility of "growing apart."

Finally, we want to address your concern that if the two of you marry, your children will be "three-quarters" Jewish. That is not correct. According to Jewish law, these children will be fully Jewish. It seems to us that your real issue isn't about percentages, but rather a worry that her father's background will play a role in her overall spiritual direction in life, and that of the children you hope to have. That is a valid concern, because she may feel a connection to the holidays and traditions that her father and his family celebrate as non-Jews, particularly since she doesn't feel a connection to Judaism. She has, in a sense, a built-in pull away from Jewish tradition, and this could easily become a source of conflict in your marriage.

On the other hand, she may not identify with any particular religious heritage. And it could be that if she learns about Judaism, she will embrace it. From your standpoint, the main thing is to explore this issue carefully -- and soon.

Dating Maze #250 - Something Is Off
Blessing on Chewing Gum
Was Rahab a Prostitute?
Extras In Our Own Epic
Comments
MOST POPULAR IN Dating
Our privacy policy