Playing with My Father 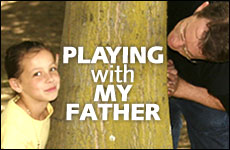 At almost seven years old, my daughter has already discovered the lure of the sidewalk. She can spend hours playing hopscotch, and jump-rope outside. As the afternoon light deepens and bleeds into sunset, she continues to play, oblivious to the approaching darkness and her growing hunger pains. She returns home reluctantly after dark, and only at her parent's insistence.

She is growing up and shares a world with her friends that I am only marginally part of. It is as close as outside our front door, and as far away as my own childhood. I can no longer jump easily, and the only opportunity for me to join in her games is by turning the jump rope until my arm grows heavy, and I pass it over to a girl who will eagerly stand, turning rhythmically, and awaiting her own turn to jump.

Yet I will not allow myself to lose her. I am determined to maintain our special bond, despite the onslaught of time. I too was once a girl who played hopscotch, and I dip back into this pool of memories in order to share them with her.

Yet even stronger than these stories of my own girlhood, I have another weapon in this, a gift from my father -- a legacy of board games for us to play together.

We hashed out the details of my future over a fierce game of scrabble.

For now, there is nothing particular we need to talk about. Today we play, content to roll the dice, and circle the board, collecting property. Yet tomorrow, perhaps there may be something that needs to be said, and the conversation will unfold as we sit at the table playing monopoly.

I remember conversations such as these with my father, where we hashed out the details of my future over a fierce game of scrabble. Had he merely asked me to talk to him, I would have scoffed, insisting, like any teenager, that I had nothing to talk about, although my behavior behind my closed bedroom door, speaking to friends on the phone for hours, belied a different reality.

Yet my father didn't ask me to talk to him. Instead he asked me to play with him, various games that changed as I grew older and more competitive. The conversation, so it seemed, was incidental.

The games soothed the bonds of our relationship, which sometimes blistered or chaffed when I was told to do my homework, or clean my room. In later years when I had to tell him where I was going or when I would be back, our games spun new webs of connection, even as the old connections from childhood unraveled. Relating to my father as an adolescent was a new type of game, one with high stakes and no clear guidelines.

I was imprisoned by my moods, sensitive to the slightest infringements on my freedom. Yet a game of scrabble could set me free from the mask of sullen adolescence, if only for an hour. I was free to play and relaxed, opening a window into my secret world.

My father studied his letters as I spoke, clever enough to not let on that he was paying as careful attention to my thoughts as he was to the game board. At the end he always told me the same thing: he trusted me and knew I'd work this out like I had worked out so many things in the past.

As an adult, I shudder at the thought of what growing up would have been like without those games. I remember once laughing so hard I couldn't speak, and I rolled off the couch, gasping for air.

I want my daughter to have these memories too. I want her to know that I won't be a mere a spectator to her life, but that I will always be there with her, as part of the game.

The author is a marital & family therapist, who maintains a private practice in Ramat Beit Shemesh, Israel. She is also an acclaimed mental health journalist, who has made significant contributions towards increasing public awareness of mental health and mental illness. She is a regular contributor to thejewishwoman.org, chabad.org, aish.com and Binah magazine. She is the author of two books, “Mother in Progress” (soon to be released by Targum Press) and the newly released “Into the Whirlwind” (Lions’ Gate Press)

4 Ways to Encourage Your Kids to Love One Another

I Guess I’m Not Okay

Take Back the Night

Teenagers: Handle With Care
Morality and Abortion: Three Views
There Are No Limits
Adam and Eve Were Vegan
Comments