I Take No Credit…and I Take No Blame 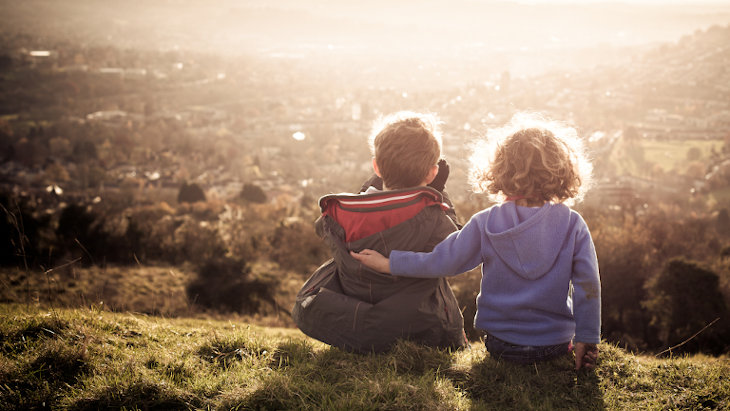 My two children have the same dedicated parents. Yet one child is thriving while the other is not.

I have a son who was born with several physical deformities, of which we had no warning before his birth. It was shocking. We had no idea if the “external packaging” that clothed my child’s soul included cognitive deficits; the doctors could provide no answers and told us to wait and see. The fear of uncharted territory was terrifying. But my husband and I pulled ourselves together with the shared goal of raising our child to reach his true potential, whatever that may be.

His first several years of life required multiple surgeries, therapies, and countless specialist visits. It was a trying period in our lives where we lived in crisis mode from day to day; it was impossible to plan more than a day in advance, which required a serious paradigm shift to my organized nature. I learned to “let go and let God.” There was no other choice.

Miraculously, my son is thriving. Despite his obvious handicaps, he's in a regular classroom and is like any other child.

And, miraculously, several years later, my son is thriving. He is in a regular classroom, despite his obvious handicaps, and is “like any other child,” the teachers tell me. He’s bright and fun, organized and gentle. He has a deliciously upbeat nature and doesn’t care when passersby stare at his noticeably different appearance.

“The credit all goes to you,” they all tell me, the “they” being the therapists and doctors, teachers, and friends. “You worked so hard for him. You left no stone unturned and you gave him the confidence to succeed despite his handicaps.”

And I understand why they think that. I researched the best doctors, surgeries, therapies, and carried through with them all, even when this required flying out of state and paying out of pocket. I quit my job to dedicate myself wholeheartedly to my son’s grueling therapy schedule instead of placing him in a special needs program when I learned it wasn’t quite the right fit for him. I taught him that his differences make him special and that he has nothing to be ashamed of by looking different. And it certainly appears that my efforts bore fruit.

Yet I refuse to take any credit. His success has nothing to do with me.

I know the truth because I have another child. A child who is so perfectly beautiful on the outside, you would never know what’s brewing underneath that façade.

This older, beautiful child of mine was born with emotional difficulties, although I didn’t know it at the time. An impossible baby grew up to be an impossible toddler, leaving me wondering why motherhood was so incredibly difficult. Not, “he kept me up all night teething” difficult, but “quick, stop her from hurting herself!” as she ran to bang her head against the concrete wall in frustration, type of difficult. The temper tantrums my friends joked about had nothing in common to the scary outbursts we experienced for hours on a daily basis.

But that was only one side of her; her other side, excessive energy and impulsivity, was equally nerve-wracking. Her behavior was baffling. How could the same child be terrified to go on slides and swings at the park, yet happily dive off my couch, head first, onto the hard-stone floor? How could she behave in a ridiculously silly, non-age appropriate way one minute, while becoming enraged and severely explosive the next? Where were we going wrong?

Thus began an over-decade long quest to help our dear daughter. We tried every parenting approach and therapy known to mankind. We consulted top psychologists and educators, spending thousands of dollars on evaluations that led nowhere. No one could give an accurate diagnosis or come up with a practical treatment plan. ADHD? Bipolar? Anxiety? Mood disorder? Depression? ODD? We were throwing darts in the dark, but we wouldn’t give up trying.

We eventually turned to psychiatrists, who were equally baffled. We tried every class of psychiatric drug that existed on the market, most of which made her violent. One doctor assured us a certain drug was so gentle that “he had never seen side effects from it,” and that it would be at least six weeks before we would see any difference in our daughter. Three days into it, she was suicidal. “I have never, in my entire career, had a patient who is as sensitive to medication as your daughter,” he told us, before giving up trying to medicate her.

I take no credit for my son’s achievements. Because if I did, it would mean I would have to take some part in my daughter’s failures.

I cry in frustration when her teachers call me. “She doesn’t know appropriate boundaries... She doesn’t know how to behave in class... She doesn’t know how to speak respectfully to authority… She doesn’t act in an age-appropriate way... She isn’t motivated….She isn’t trying…There is a gap in maturity level between her and her friends.” Yes, teacher, I have already tried social skills training, OT, play therapy, CBT, and whatever other therapy you have in mind. Yes, I have spoken to parenting experts and continue to receive one-on-one guidance from (very expensive) professionals. Yes, we have tried all the medications that exist….and we are out of options.

There is a God above us Who orchestrates all. He gave me my beautiful children, with all their challenges and strengths. He knew we were the right parents for these precious souls. And He is the one who takes all that effort – what Jewish sages call in Hebrew, hishtadlut – all that time, money, sweat, and tears, and decides which efforts will yield positive results, and which seemingly won’t.

It is He who granted my son a healthy emotional makeup in a handicapped body, and my daughter a beautifully healthy body with emotional difficulties. It is He whom I cry to, begging for my daughter’s emotional health.

And in the meantime, I will keep on trying.

Why Kids Need to Fail