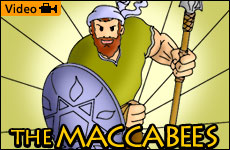 Who were these Jewish warrior heroes?

The Hebrew word Chanukah means "dedication." In the 2nd century BCE, the Syrian-Greek regime of Antiochus sought to pull Jews away from Judaism, with the hopes of assimilating them into Hellenism – Greek culture. Antiochus outlawed aspects of Jewish observance – including the study of Torah – which began to decay the foundation of Jewish life and practice. During this period, many of the Jews began to assimilate into Greek culture, taking on Greek names and marrying non-Jews.

In response, a band of courageous Jews took to the hills of Judea in open revolt against this threat to Jewish life. Led by Matitiyahu, and later his son Judah the Maccabee ("The Hammer"), this small band of pious Jews led guerrilla warfare against the Syrian army.

Antiochus sent thousands of well-armed troops to crush the rebellion – but the Maccabees succeeded in driving the foreigners from their land.

Jewish fighters entered Jerusalem in December, 164 BCE. The Holy Temple was in shambles, defiled and desecrated by foreign soldiers. They cleansed the Temple and re-dedicated it on the 25th day of the Jewish month of Kislev. When it came time to re-light the Menorah, they searched the entire Temple, but only one small jar of oil bearing the pure seal of the High Priest could be found. Miraculously, the small jar of oil burned for eight days, until a new supply of oil could be brought.

From then on, Jews have observed a holiday for eight days in honor of this historic victory and the miracle of the oil.

Today, the observance of Chanukah features the lighting of a special Chanukah menorah with eight branches (plus a helper candle), adding one new candle each night. Other customs include spinning the dreidel (a top with Hebrew letters on the sides), eating "oily" foods like potato latkes (pancakes) and sufganiyot (jelly donuts), and giving Chanukah gelt (coins) to children.