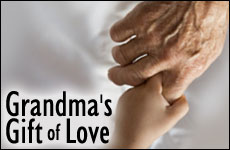 My cousin made a wreck out of his life. But my grandmother never stopped believing in him.

I guess it doesn't sound so to say that my grandmother, of blessed memory, really loved her grandchildren. She could always be counted on for the perfect card in honor of every milestone, for a marathon clothes shopping trip in anticipation of each special occasion, for hugs and kisses whenever she saw us. Sometimes she was so over the top she embarrassed us, as when she notoriously jogged along a parade route I was marching in, calling out my name and applauding.

Each of us thought we were her favorite. She was always there with words of praise and encouragement. "I'm sure you'll graduate at the top of your class!" she would always say (I didn't). "I'll bet you are the best employee they've got!" she'd coo (I wasn't). "The boy who marries you sure is going to be a lucky guy!" she announced upon every romantic disappointment. "My granddaughter is the most brilliant, funny and loving girl in the whole world!" she told her friends.

Whenever I spent time with her, even into adulthood, one of her favorite activities was reciting what was "new and exciting" about each of her grandchildren. There were 12 of us, and we were a beloved clan, as she toted us around in mixed groups of three and four in her old Cadillac, to Disneyland, to the IMAX theater, to the Science Museum. She was happiest when we were all together, her happy brood. When we were older, if she ever stumbled upon two of us cousins talking, we'd say "Look Grandma! We're bonding!" and she would just beam.

We believed she would do anything for us. One time, my sister and a cousin slept over at Grandma's and they discussed how they could ask Grandma for anything and she'd give it to them. To test their theory, they decided to ask her for an elephant to keep as a pet. "I would love to get you an elephant," she told my sister with a big smile, without missing a beat. Then she made a little bit of a sad face and said, "but your father wouldn't let you keep it." (Definitely true, he had already said no to a dog.) She left open the question of whether she actually would have gotten the elephant, had Dad been more of an animal lover.

And who were we, this lucky tribe? Perhaps you would imagine we were all perfect darlings, easy to love, piling success after success, marrying well, conquering the world. We were not. We were 12 people, spanning the range of behaviors. We were boisterous, shy, well-behaved, rebellious, learning-disabled and gifted. Her praise was universal, but our gifts and choices were not always so praiseworthy.

My cousin Jeff, her oldest grandchild, did everything wrong. He smoked, he smoked pot, he used hard drugs, he sold drugs, he spent time in jail, he rode a motorcycle, he got into a very bad accident, he had two children out of wedlock... I don't think he finished high school. My sister was intrigued by him, but I was afraid of him.

I wondered what he might have been smoking and when he last bathed. I didn't make eye contact with him for a very long time after that.

I have an early childhood memory of waking up one morning to find him in our living room, in the lotus position, in a meditative trance -- a trance so deep that talking to him did not have any effect. I sat down and contemplated this strange cousin of mine, with the long scraggly hair and the circular burn on his forehead where the end of the exhaust pipe of his motorcycle had left its mark. I tried to imagine his accident and how his body would need to have fallen for his head to come into contact with the bottom of his motorcycle. I thought about what he might have been smoking or ingesting and wondered when he had last bathed. I didn't make eye contact with him for a very long time after that. There were enough other cousins to play with at our family gatherings. I could easily just avoid him and pretend he wasn't there.

But not Grandma. When she recited her litany of grandchild accomplishments, she always started with Jeff. Whatever small step he'd taken toward the good, she proclaimed it as if he'd walked on the moon. "Jeff's out of jail!" she proclaimed triumphantly. "Jeff got a job!" she'd gloat over his minimum-wage manual labor gig. "Jeff's employer loves him, he gets wonderful benefits!" she bragged of his health plan. "Have you talked to Jeff? He's moving into his own apartment!"

I found it bewildering that she did not seem to notice the wreck he'd made of his life. It didn't seem to throw her off at all. His milestones held as much excitement and promise for her as if he'd just graduated with honors from medical school. Meanwhile, I had not talked to Jeff in years.

Today, Jeff is a middle-aged man. He eventually married, lives in a home he owns, pays taxes, and is raising two more children. He successfully saw the children of his youth through high school and into college; at least one of them graduated. As his life eventually stabilized, Grandma would still always proudly begin with him: "Jeff is the most improved!"

When my grandmother passed away at 98, there we were, the 12 grandchildren, and dozens of great-grandchildren, to wish her farewell. It was decided that Jeff, as her eldest grandchild, should be the one to speak for all of us.

"She believed that I had greatness inside, when I had given her no reason to think so."

"Grandma knew the meaning of unconditional love," he said, standing alone at the podium. "She always told me I was a good person, that there were good times ahead for me. She never abandoned me. She visited me in places where no one else would visit. When no visitors were allowed, she wrote me letters. She was a lifeline in the darkest hole. She told me that no matter what I had done, she completely forgave me, and that she was confident that I could turn things around and build a good life for myself. She believed that I had greatness inside, when I had given her no reason to think so.

"When my own parents wanted nothing to do with me, and my friends were gone, her letters kept coming, and with her visits came little gifts to help me on my way. And when she saw me, she hugged me with love and forgiveness. It was because of her unending confidence in me that I was able to rebuild my life, that I am able to have a life, quite possibly that I am alive at all. Everything I have, everything I am, is thanks to her."

He sat down, and then we buried my dear, sweet grandmother.