Cleaning Up the Inner River of Thought 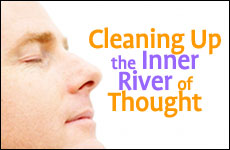 A review of Rabbi Zelig Pliskin's Conversations with Yourself: a practical guide for greater happiness, self-development and self-empowerment.

Three weeks ago I sat conversing with a New York psychologist with whom I've co-hosted a few radio shows. "Tell me, Doctor. What's the longest running, most influential, and most personal conversation we ever have in life?" She waited as I added, "And it's the conversation we're least prepared to manage." In an instant, I saw the light of revelation flicker in her eyes. "Of course," she exclaimed, "The conversation with yourself."

I admit to an insider's advantage in the dialogue with the good doctor. I had just read the manuscript of Rabbi Zelig Pliskin's latest book Conversations with Yourself (ArtScroll Mesorah Publications, Brooklyn NY, August 2007). The concepts I'd acquired in those 91 short, principle-laden chapters were weighing heavily on my mind. I've since asked this same question of a number of other people. But few connect the dots. The idea of a conversation with oneself still conjures up images of "madman muttering in the street -- film at 11."

But Rabbi Pliskin has accurately placed his finger on a seriously neglected dimension of personal development. Starting from the introduction, he sets out the core ideas that infuse his prescription for giving oneself a major mental overhaul.

Without a concerted effort it is likely that the old patterns will be repeated.

Rabbi Pliskin doesn't claim that the ideas in onversations with Yourself are novel or unknown to readers. He recognizes readers may say, "There's nothing really new here we don't already know." Rabbi Pliskin rejoins, "This is likely to be true. But without a concerted effort to create a more positive pattern, it is likely that the old patterns will be repeated."

Pattern breaking and pattern remaking is what Conversations with Yourself is really all about. With this goal in mind, Rabbi Pliskin guides the reader through a series of successive and corrective steps designed to transform unconscious, negative, and destructive self-talk into conscious, positive, and constructive self-talk.

Since so many people today are short of time, Rabbi Pliskin employs a comfortable template throughout most of the book. First, each chapter is refreshingly brief. Some can be read in less than three minutes; the longest one I read took five or six minutes. Second, using simple, conversational language, Rabbi Pliskin focuses on one core concept per chapter. Finally, he introduces the material presented in each chapter by clearly explaining the theory first, and then he concludes by citing examples drawn from the life experiences of others who have applied these principles.

While a determined reader can polish off all 361 pages in the time it takes to make a round-trip flight from JFK to LAX, this book is, in reality a prescription for life realignment. Therefore, it's best absorbed a chapter a day over a three month stretch.

Several of the chapters provide dynamic exercises geared to producing radical shifts in thought, speech, and behavior. Some of them provoke a smile, as in the idea proposed in Chapter 87 suggesting that we use our cellular phones to speak enthusiastically to ourselves during power walks. Others are rather blunt, such as Chapter 66, which addresses the kind of self-talk that can actually intensify anger, balancing it with the kind of self-talk that helps us let it all go. While the book primarily centers on enhancing one's own internal self-talk, Rabbi Pliskin also expands the circle of focus to include family and professional relationships, as well.

An uncertain freedom is often more overwhelming and more unnerving than a predictable bondage.

A student of human behavior for many years, Rabbi Pliskin recognizes that most readers close their minds to new ideas shortly after they close the book that just presented them. It's so easy to slide back into the same old inefficient, yet familiar patterns. People will exhibit great stubbornness in holding on to self-destructive patterns. This is not a modern phenomenon at all. We are all aware that more than once the Jews who had exited from Egypt expressed a curious yearning to return to slavery. Similarly, as case studies on criminal recidivism show, an uncertain freedom is often more overwhelming and more unnerving than a predictable bondage.

To counter the natural and repetitious compulsion to hold on to toxic self-talk, Rabbi Pliskin introduces each element of change gradually and encourages the reader to let the new behavior take root before moving on further. In the closing chapter he provides a long list of 421 statements he calls "self-talk replacement phrases." All are written in the present tense, as one of the major principles of the book is that all self-talk happens "in the moment." Many of the replacement phrases are stated imperatively, such as:

The list also includes a number of interrogative phrases that suppress reactive thinking and stimulate positive responses. Among them are:

As I completed the book, I found myself wanting a closing word in the form of an epilogue. But there isn't one -- just those 421 self-talk replacement phrases. It took a minute or two to recognize the genius implicit in the omission. There can never be a conclusion to such a book! Changing one's life is a lifetime pursuit. The great Jewish sages of wisdom, the masters of mussar (ethical conduct), have expounded on this understanding down through the centuries. Therefore, while one may finish reading Conversations with Yourself, there is no conclusion to the process it describes. The internal river of self-talk will continue to flow, unabated, within every one of us. The only question is: will that river of thought be toxic or a tonic?

Rabbi Zelig Pliskin is the author of 22 books with his specialty in mastering happiness and other positive inner resources. Click here to buy his new book, Conversations with Yourself: A practical guide to greater happiness, self- development, and self-empowerment
Like What You Read?  Give Jews around the world the chance to experience engaging Jewish wisdom with more articles and videos on Aish. It would make your mother so proud and as a nonprofit organization it's your support that keeps us going. Thanks a ton!

The Danger in Your Head

How to Say You're Sorry

We’re Not All in the Same Boat

When God's Answer was Staring Right in My Face

Breakfast with Tzvi: Shwarma!
Should I Break Up, Get Engaged or Keep Dating?
Time Is Your Precious Commodity
A Constant World in Flux
Comments
MOST POPULAR IN Spirituality
Our privacy policy