The Magic of Havdalah 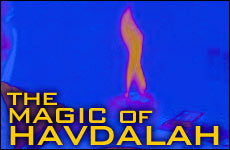 Shabbat comes to a close in a most dramatic and touching way.

See companion article on the "how-to" of Havdalah.

The word Havdalah means to differentiate, to distinguish. The entire ceremony is to distinguish between the Shabbat that we have just experienced and the week that we are about to enter, both as an existence in time and as a feeling of existence.

- First on the wine, again a symbol of joy. Now we take pleasure in what we have accomplished, and hope that it will continue to grow into the week.

- Then on the spices, whose fragrance we inhale to comfort our soul at the loss of Shabbat.

- And finally on the flame, which symbolizes light and darkness and the ability to see the difference in a very deep way.

The greatest tool we have for appreciating anything is the ability to distinguish and differentiate. When we see things as rare and , they stand out as special, and somehow have their own place in the world.

Yet, all too often, we have a hard time utilizing this tool and seeing things for their own ness. Masses of people just become ordinary beings. Beautiful sunsets start to look all the same.

Our challenge is to discern and see the minute differences that exist in the world in order to appreciate their rare and qualities and thus take pleasure in their existence.

It takes effort to refine this ability.

In the Havdalah ceremony, we set a braided candle aflame and hold up our fingers to see the light and shadows dancing upon them. This light and darkness symbolizes wisdom and confusion, and we hold our hands before the flame in order to see the difference.

When we contrast understanding with the tragedy of confusion, we differentiate and gain a deep appreciation for wisdom.

Shabbat is over. We mark the ending with Havdalah and recognize the beginning of a week. But we also mark the difference in how we will live the week.

Shabbat is a rare and gift. Appreciating its beauty and understanding the depths of its wonder sometimes means seeing it in contrast to the rest of the week.

And Shabbat is a different plane. When it ends, it is not just that the clock has ticked away, it is that the level that we have enjoyed has also come to an end. For the week is not Shabbat. If we have used the Shabbat properly however, we may be able to infuse some of it into our week.

The custom of lighting two additional candles, after the ceremony with the Havdalah flame, is just one way we can try and stretch out that light that we have gained just a little bit longer.

I was spending Shabbat in Tzfat in the northern part of Israel with a friend. We were both going to the same school for women in Jerusalem, but needed a getaway, and so we chose this quasi-mystical Shabbaton as our Shabbat adventure.

We met two women there who were studying at a very nontraditional school in Jerusalem. Despite our philosophical differences, we all became fast friends during Shabbat. When Shabbat was over, we had just a few minutes to catch the only bus to Haifa where we could get a connection to Jerusalem, so there was no time to linger and make Havdalah.

But, as Egged bus has been known to do, there were some traveling delays, so by the time we arrived in Haifa, it was 11:30 at night, and there were no connecting buses to Jerusalem.

All four of us were traveling together, and the consensus was to grab a bus to Tel Aviv and from there get to Jerusalem. So we did.

By now we were getting kind of hungry, and though we had brought snacks along, you are not allowed to eat until you hear the Havdalah ceremony. I guess it keeps you from jumping back into your week without a properly honored separation from Shabbat.

Our two colleagues were not as traditionally observant as we were, but refrained from eating, as they knew the halacha just as we did.

Okay, so now we're four young single girls getting off the bus in Tel Aviv very late at night. If you don't know, I must tell you that this is not exactly the nicest neighborhood to be in, day or night. And this was 1:00 a.m. We stuck close together.

To our dismay, we had missed the last bus to Jerusalem. By now we were all definitely in the realm of hunger, so first things first -- let's make Havdalah!

My friend from school led the way, and we all followed her into this sleazy-looking shish kabob/falafel place filled with men drinking and speaking in quick, loud spurts, punctuated by bursts of laughter. Feel the mood? Believe me, we did.

My friend walked confidently up to the counter and announced to the owner that we wanted to make Havdalah.

If I hadn't been there I wouldn't have believed what happened next. The guy got very excited and announced to everyone that we were about to make Havdalah! Men, who, believe me, looked far from religious, left their cards and cigarettes and came over to the counter.

Without missing a beat, my friend ordered an Israeli fruit juice (as you can make Havdalah over a social drink, not just wine or grape juice), borrowed some matches from someone in the crowd, and asked the owner if he had some sort of spice for the ceremony.

He came up with some chicken soup powder, and we figured it was close enough.

Two matches were struck and held together in place of a braided candle, my friend made the blessing over the fruit juice, and the chicken soup powder was passed around for all to smell. (Which we found out later was not valid for the spices blessing.)

During all this, two rabbinical students were standing back with their mouths open, utterly shocked at what they were seeing.

She said all the blessings, drank down the juice, and when the fire was extinguished, everyone in the place clapped. We thanked them, waved goodbye, and grabbed a taxi to Jerusalem.

On route, we broke open our snacks and laughed about our Havdalah adventure. But I was struck with something much deeper, as my original negative assessment of the Israelis we encountered turned to one of appreciation that every Jew, religious or secular, has a special spark inside.

We always try to lower the lights during Havdalah so that the flame glows over all of us. It's so beautiful as our daughter holds the candle so carefully, watching it drip on a sheet of newspaper. My husband recites the blessings, and we smell the sweet cloves.

Such a bittersweet moment. Shabbat is leaving, so it's kind of sad, but the week of events beckons with excitement.

Yes, I love Havdalah, from the first strike of the match, so forbidden to do over Shabbat, to the sizzle of the candle, as it's extinguished into the last of the wine.

We always end with Shavua Tov -- "a good week" -- and then sing "Eliyahu" slowly and quietly. Before long, everyone is in jammies and in bed, the dishes are done, and the lights are out. Already the anticipation begins for next Shabbat...

We were attending an out-of-town wedding and stayed in a hotel over Shabbat. It went pretty smooth until the end when we made Havdalah.

We lit the big, braided Havdalah candle that we had brought along and held it up. Halfway through the blessings we heard the hotel fire alarm go off and a lot of commotion outside. We looked up to see that the candle was creating a lot of smoke and realized that must be what set off the alarm!

Quickly we extinguished the flame and went out into the hall to see people running this way and that. We were so unbelievably embarrassed that we just pretended not to know where the fire was, like everyone else.

Eventually the alarm stopped and everyone went back to their rooms. We finished Havdalah using two matches for a tiny, tiny flame.

Turn On the Lights
Chukat 5782: Let’s Play the Blame Game!
The Sin of Moses: The Two Ways to Communicate
In Aftermath of Chicago’s July 4th Shooting, Local Moms Provide Countless Points of Light
Comments
MOST POPULAR IN Shabbat
Our privacy policy