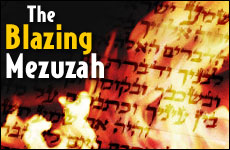 Way #1: Be Aware of Every Moment

Way #4: Introduce Yourself to Yourself

In the midst of a fraternity party, my Jewish spark was unexpectedly ignited.

To appreciate the victory of the Jewish revolt against Syrian-Greeks, it's important to recognize that our enemies attacked us on a spiritual front. The Greeks wanted their culture to reign supreme, and that necessitated abolishing the strongest competing culture in human history: Judaism. Thus the Greeks sought to uproot the study of Torah, observance of mitzvot, and our distinct Jewish identity.

I can relate to this dynamic in my own life. The Hebrew school I attended taught me how to read Hebrew, to say Shema, and that a mezuzah is placed on the doorways of Jewish homes. I remember one Hebrew school project when I made a mezuzah by writing the Shema onto a rolled up piece of paper and placing it into a decorative case. But with no deeper explanation, that was the extent of my education regarding mezuzot.

Many years later, I was a college student and joined a fraternity. None of the other members were Jewish, but they were aware that I was Jewish. At our school, members of a fraternity often lived together by renting a house near the campus. Religious Jews owned many of these houses, as evident by the mezuzot affixed on the doorposts. I recognized those little boxes, but paid them little attention.

One night at a fraternity party, I noticed two fraternity members intentionally pry a mezuzah off the doorpost. I followed them around the house and realized they were collecting the mezuzot as they moved from doorpost to doorpost. I followed them into a room and watched them remove the scrolls from the decorative casings. They opened the scrolls, tried to read the writing, and then crumpled the scrolls up in their hands, and tore some in half.

The small spark of Judaism inside me made me feel obligated to stop them.

"Why did you take those off the doorposts?" I asked.

"I dunno," one of them answered, "we just want to see what's inside."

"You should have left them where they were. You're not supposed to take them down."

"It's called a mezuzah and they go on the doorposts of Jewish houses."

I was stunned into silence and then admitted, "I don't know." As these words slipped from my mouth, I could feel the strength of my position weakening.

"Well, what's written inside them?" His tone of voice showed genuine interest, but it clearly put me on the defensive.

Again I responded, "I don't know."

They continued with a stronger tone of expectation, "Well, why are they on every door?"

If you're the Jew and you don't know, then why should we care?

They looked at me with scorn, and finally one of them said, "Well, if you're the Jew and you don't know, then why should we care?!"

This question was shocking and painful. Perhaps intensified by my intoxication, I continued arguing with them and demanded they give me the mezuzot.

Finally, one of them walked out of the room, and returned with a handful of mezuzah cases and scrolls. He looked at me, grinned maliciously and said, "You want them so badly? Come and get them!" -- and he threw the handful of mezuzot into a burning fireplace.

I was shocked. It took but a few seconds for the mezuzot to be consumed in the flames.

I walked out of the house, dejected and heartbroken. I sat down in the cold night and replayed the incident over and over in my mind, each time coming back to the same painful question: "If you're the Jew and you don't know, then why should we care?"

This incident ignited my curiosity and became the catalyst for my road back to Torah and Judaism. Today I now realize: Every word of Torah we learn and every mitzvah we perform is an extension of our victory over the Syrian-Greeks. They tried to destroy our connection to God and His Torah. But instead, they ignited a deeper flame inside us.

As we light the Chanukah menorah, may the flames inspire us to carry on the victory of the Maccabees -- the victory of Jewish survival, Jewish education, and Jewish pride.

Brian Silvey is a technical writer for IDT Corporation in Newark NJ, and lives with his wife and family in Highland Park NJ. 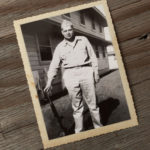 Giving Thanks to Seymour7 min read

Struck by the Storm7 min read

All Inner Strength in all Contexts1 min read