My Promise to Kaya 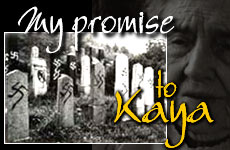 When Jews are in trouble, it sometimes takes courage to speak out. Whether the threat is in Germany or in the Middle East.

Kaya Williams was an activist in the American Jewish Congress (AJC) and a proud Reform Jew. I first met her in the early 1980s when I served as the director of the Martin Steinberg Center of the American Jewish Congress -- a center for Jewish artists in the performing, visual and literary arts. One of the Center's artists told me about a woman in her 90s who had been active in the AJC during the 1930s. "She’s a widow, and lives all alone," the artist told me, "and it would be a mitzvah if you would visit her. Besides, she has an amazing story to tell."

I went to visit Kaya Williams at her West Side apartment in Manhattan. She began to tell me about her activities during the 1930s. The leaders of the AJC Women's Division were especially concerned about the rise of anti-Semitism in Germany and the ways in which the German government was spreading anti-Semitic propaganda to other countries, including the United States. Kaya was chosen to go on a speaking tour of Jewish communities all over North America in order to alert them of the growing danger. Her prime target would be liberal American Jews who were concerned about social and political issues.

Kaya recalled: "When I first starting speaking, I had to overcome my initial shyness. However, I spoke from my heart, and I was able to reach a good number of people. Moreover, I had documentation that proved the German government had declared war against the Jewish people, and that they were actively spreading anti-Semitism to other countries. What I wasn't prepared for was the strong opposition and cynicism that I encountered among many Jews. They gave me the following arguments:

You must not be silent when Israel and the Jewish people will be in danger again.

"Don't you realize that the Germans had suffered a loss of national pride after World War One and that this anti-Jewish propaganda is just a way of letting of steam? Nothing will come of it. Besides, the Germans are a highly cultured people with outstanding artists, writers and scientists. They represent the best of western civilization. Such a civilized country is not going to endanger Jews. Moreover, have you forgotten that the Jews are a highly successful minority in Germany and that they have contributed to all facets of their country's national life? It's a shame that a sophisticated, Reform Jew like you should be encouraging Jews to be paranoid in our modern, liberal age!"

Kaya looked at me with great intensity and said: "You must not be silent when Israel and the Jewish people will be in danger again. You must speak up like I did, even if many don't believe you."

I couldn't understand why she seemed so worried, since Israel was not in any direct danger 15 years ago when we spoke. Yet she seemed to sense that some great danger was awaiting Israel and all Jews in the future. I reassured her that I would indeed speak up and follow her example, but my words did not satisfy her.

"Promise me that you will have the courage to speak out," she said. "Promise me!" I promised her, and she seemed relieved. She started to talk about her unhappiness at the failure of Jewish organizations to take a more active role in protesting the murder of Jews during the early 1940s, but she abruptly stopped, as the topic was too painful for her to talk about.

IF KAYA WERE HERE TODAY

I have thought of Kaya often during the past few months, for there is growing evidence that her premonition of Israel and the Jewish people facing serious danger was correct. The public is now aware that although the Palestinians leaders were talking the language of peace to Israeli and western leaders during the Oslo process, they were preparing their own people for war. In addition, they reassured their people that the Oslo accord was merely stage one of the eventual "liberation" of all of Palestine -- as Faisal Husseini said clearly in speeches and interviews before his death last month.

I think Kaya would have been pleased with the AJC’s recent public statement. Although the AJC had been an active supporter of the Oslo accords, the organization took out a full-page ad in the Sunday New York Times with the heading: "It takes a big organization to admit it was wrong."

The AJC leadership wondered publicly whether the Palestinian involvement in the peace process was "merely a subterfuge on the road to a dream of eliminating Israel." And in a statement addressed to Yasser Arafat, they wrote: "We're no longer prepared to applaud your words elegantly delivered in English, only to hear them simultaneously disavowed in Arabic. You can only persuade us with real peace-making. With real efforts to re-educate your people."

Kaya would have been proud.

She would also be furious at the way Palestinian and other Arab leaders are reviving the worst forms of anti-Jewish hatred. For example, the official government newspaper of Egypt has published several articles describing how Jews bake Passover matzot with the blood of Gentile children. The Palestinian police were cited as a source for this information.

Arabs are being told that Pokemon games and cards are all part of a Zionist plot to decrease the Arab population.

Then there was the accusation by some leading Moslem leaders in Arab countries that the Pokemon craze which has spread all over the world, is sponsored by "Zionist" agents. A recent article in Newsweek titled "The Pokemon Fatwa," reports that the Arabs are being told that playing with these "monster" games from Japan will cause infertility, and that these Pokemon games, cards, and toys are all part of a Zionist plot to decrease the Arab population. The article notes that "in Egypt, the hysteria has reached fever pitch."

Kaya would probably weep at the article published in the April 13, 2001 edition of the official Palestinian Authority daily, "Al-Hayat Al-Jadida," which states that the Holocaust is a "myth." The Arab world has become a leading center for the "Holocaust denial" movement, and a conference on this theme is scheduled to take place soon in Jordan.

Some of my progressive Jewish friends feel very uncomfortable when I point out this information. "You are encouraging Jews to be paranoid," they tell me. "Besides, this is only propaganda, for the Palestinians and their Arab allies are just letting off steam. It's only words! In addition, Israel has a strong army, so there is no real danger to our people."

Precisely the words that Kaya Williams heard during the 1930s.

Sure, my comments about the dangers facing Israel and the Jewish people make some of my friends uncomfortable. But what else can I do? The Arab threat against Israel is increasing, and I have to keep my promise to Kaya, to have the courage to speak out.

A Special Double Wedding In Israel, When the Rockets Rained Down

My Name is not Susan
Bechukotai 5782: Divine Retribution
Behar 5782: Working to Live or Living to Work?
The Wholeness of Being Broken
Comments
MOST POPULAR IN Israel Diary
Our privacy policy