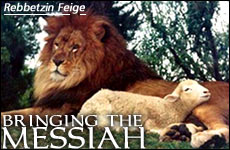 If the Messiah and redemption has to wait, let us make sure that we are not the ones who are holding up the process.

My teacher taught me that nothing stands in the way of a person's will. I'm 16 years old and I want the Messiah to come already, but I don't even know where to start.

So many great rabbis have wanted the Messiah much more than me, yet he still has not come. Why should I think that I could hasten his arrival?

What wonderful sentiments for a 16-year-old! Yearnings of this kind most certainly impact the coming of the Messiah.

An introductory note on the subject of the Messiah is in order.

Jews, since our inception as a people, in every corner of the globe and especially in every generation since the destruction of the Temple in Jerusalem in 70 CE, have awaited the coming of Moshiach (the Messiah).

Maimonides teaches that the Messiah will, of necessity, be a living person, a leader of stature descended from the house of David (the line of royalty). He will be an exemplary Torah scholar and an impeccably faithful adherent of the mitzvot (commandments).

The Messiah will be Divinely inspired but will not be required to perform miracles or supernatural feats to prove his authenticity. Rather his credentials will be confirmed as he leads his fellow Jews to a full commitment to Torah observance and to their responsibilities as "a light unto the nations."

In fulfilling his messianic mission, the Messiah must bring the Jewish people back to our homeland, the land of Israel, and rebuild the Beit HaMikdash, the Holy Temple. He will usher in the long awaited millennium wherein the world, (continuing in its current physical configuration), will be full of the "the knowledge of the Lord like the waters cover the seas."

Enmity and discord will cease from the face of the earth. Isaiah's prophecy of the "lion lying down with the lamb" will finally be realized. Humankind will no longer be subjected to the tyranny of the wicked, and there will be neither famine nor war. There will be no envy or competitiveness, and prosperity will abound. God will wipe the tears from every eye. Peace will reign and mankind, most especially Israel, will be free to pursue its spiritual goals and aspirations.

Despite a scientifically and technologically advanced world, there has arguably been little progress in the realm of human relationships and interactions. Hatred, wars and conflict continue to rage out of control. In frustration, desperation and feelings of total impotence, we throw up our hands and admit that only the redemptive force of the Messiah will bring sanity to our world.

But why hasn't the Messiah come yet? And what role can we play in expediting the process?
The prophet says, "The smallest shall become a thousand, and the least, a mighty nation. I am the Lord, in its time, I will hasten it [the redemption]" (Isaiah 60:22).
There is an apparent contradiction: If there is an appointed time, how does "hastening it" help?

The commentaries note that there are two possibilities. The first is that if we are meritorious, the process will be speeded up. And if not, then there is a designated concluding point in the destiny of mankind by which the redemption must come regardless.

God allows for the possibility of a quicker redemption, thereby opening the door for human input.

Yes there is a designated time, but God allows for the possibility of a quicker redemption, thereby opening the door for human input.

It is also noteworthy to point out that we have here the assurance that the Almighty will not allow us to totally self-destruct. Taking the holiday of Passover as the model, when there was the danger of spiritual extinction (having descended into the 49th level of the abyss of the decadent Egyptian culture), the Almighty intervened and redeemed us.

Contrarily, if we should rise to the challenge and access lofty spiritual heights on our own, the footsteps of the Messiah will immediately be heard and redemption will follow.

It is impossible for a human being to fully understand the complexities of God's plan for His world. There are mystical intricacies far beyond our reach to obtain. For most who are presumptuous enough to claim access to the Kabbalistic works, consider the apt comment that "those who know don't talk and those who talk don't know."

Nevertheless, there are some fundamental concepts that inform Jewish living. We believe that God created the world with purpose and each one of us has a role to play and a specific contribution to make to the ultimate destiny of mankind. Both collectively and on an individual level, the total picture will be incomplete if we don't achieve the objectives of our lives as mandated by heaven.

Thus the conclusion of history as we know it and the ushering in of the new millennium waits for our personal "tikkun" (reparatory work).

In the language of mysticism, these constitute the specific "sparks" that are assigned to our soul to claim. Moreover, our souls cannot access eternal peace without the completion of this mission.

The Messiah's tarrying presents us with the challenge to examine our lives to determine whether perhaps it is our soul that has as not yet reached its potential.

The internal, mystical workings of God's world are unfathomably complex and defy conventional human understanding. Suffice it to say that the Messiah's tarrying presents us with the disconcerting but nonetheless compelling challenge to examine our lives, our values, and our behavior in order to determine whether perhaps it is our soul that has as not yet reached its potential.

Our sages exhort us to always view the universe as hanging in the balance as if it is our choices and decisions that determine its fate. If the Messiah and redemption has to wait, let us make sure that we are not the ones who are holding up the process.

The Talmud teaches that one of the three questions the heavenly tribunal will confront us with on our final day of judgment will be "Did you live with anticipation of that final redemption?"

The following incident elaborates. The renowned Rabbi Nachum Tchnernobler, one of the early Chassidic luminaries, found himself in an inn of a simple, hard-working farmer during one of his travels. The rabbi's custom was that at midnight he would arise, sit on the floor and mourn and wail over the destruction of the Temple and the "Golus HaShechina" (the Divine Presence in exile).

The farmer was awakened to the sorrowful sounds of crying and rushed into the rabbi's room to see what was wrong. He found the rabbi on the floor, tears streaming down his face. Fearful that he might be responsible, the innkeeper beseeched the rabbi to share the cause of his pain.

The rabbi explained that this was a nightly ritual to beseech the Almighty to send the Messiah to redeem His people and return them to the Land of Israel.

"How terribly inconvenient it would be for the Messiah to come now!"

Moved by the rabbi's words and intense feelings, the simple innkeeper ran to tell his wife that they, too, must pray for the Messiah to come.

His wife proceeded to excoriate him, reminding him that they had just recently managed to pay off their debt and gain ownership of the farm and its animals. How terribly inconvenient it would be for the Messiah to come now! She then instructed her husband to make sure that the rabbi would stop praying.

The poor innkeeper ran back to the rabbi's room with his wife's message. The rabbi patiently reminded him that prosperity of any kind in the climate of the wicked Cossacks and their recurring attacks on Jews was very short lived and certainly could not be counted on.

Impressed by this irrefutable point, the innkeeper ran back to his wife. She agreed that the rabbi's point was well taken, but insisted that instead of his praying for the Messiah to redeem the Jews and take them to Israel, the Messiah should take the vicious Cossacks to the land of Israel, leaving the innkeeper to enjoy his newly acquired farm.

While humorous, the story strikes close to home. Indeed, how many of us, comfortable as we are in our surroundings, with homes, jobs, and high standard of living, would be ready to pick up and go to Israel if the Messiah would come now?

A bottom line requisite to bring about redemption is to eagerly "await" the Messiah with a genuine burning desire. Whether he comes in our time or, God forbid, not, we are both held accountable and credited for the quest. Nothing stands in the path of willing. We must will, long, yearn, desire, quest, beseech and pray. But as to the actualization of that long awaited promise, we must defer to the unfathomable wisdom of the Almighty.

In conclusion, I would urge you, my dear reader, to consider the following points:

The Trouble with In-Laws

The Inner Struggle
Lessons from the Book of Jonah
Where Are We? The Body, Brain, Soul Problem
Dr. Sheila Nazarian’s Escape from Iran
Comments
MOST POPULAR IN Family
Our privacy policy
Aish.com Is Looking for Great Writers