The Sweetest Matzah Ever 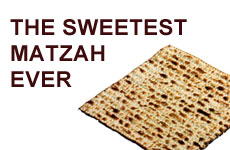 A few weeks before Passover, a handful of Jewish prisoners in a Soviet labor camp in Siberia decided they wanted to celebrate the upcoming Jewish festival.

Michael Stravinsky had been chosen as their representative to request flour for baking matzahs from Vladimir Petrov, the Russian officer in charge.

The Jewish inmates knew that they might be severely punished for asking such a request. But they also knew that the mere thought of eating matzah on Passover night along with Jews all over the world would be their greatest taste of freedom.

Michael had been accused of treason and passing on Soviet State secrets to Israel. He had been sentenced to 25 years of exile in Siberia to work in a forced labor camp. He was separated from his family and friends and was allowed contact with his loved ones only once a year for two hours.

His real crime was teaching Jewish History and Hebrew to a packed room of young Jews, hungry for some knowledge to connect them to their people.

Michael, the group's spokesman, approached the Russian camp administrator with their written petition for baking matzahs. With a smirk on his face, Petrov said, "I will forward your request to KGB headquarters, and we will act according to their instructions."

Days passed, and there was no reply from Moscow. Some of the group were convinced that they had made a grave mistake by signing the petition, and they would be singled out for even worse treatment.

Passover was only a few days away and still no reply from Moscow. All of the group with the exception of Michael had given up hope and were nervously awaiting the repercussions.

As Michael was busy repairing equipment in the labor camp, the prison guard called out, "Stravinsky, you are to go immediately to administration building." With his heart in his stomach, knowing full well what this summons could mean, Michael did as told.

Fully expecting the worst punishment of all -- confinement to the eight-foot-square punishment cell for the whole of the Passover week -- Michael knocked on the door.

Inside, he confronted Petrov, who, without ceremony, handed him a piece of paper. "Your request for matzah has been granted," Petrov announced, adding, "We are as surprised as you Stravinsky. I will command the officers to give you and your group the bricks to build your oven. The flour ration will be deducted from your food ration for the next 7 days."

The building of the oven began with feverish haste for fear of a reversal of orders. Matzahs were baked from the meager rations of flour. The group had now been joined by other Jewish inmates who were astounded at the thought of eating matzahs on Passover. For some of them, this would be their first Passover celebration.

Even though the shapeless, burnt matzahs they baked were nothing like the matzahs they had once received in smuggled packages from Israel, to the Jewish prisoners these matzahs were the sweetest taste of freedom.

Seder night arrived and a place for the Seder was secretly arranged in a corner of the labor camp between two huts. They used a plank of wood for a table and placed their blankets on the ground to lean on. An old, dented broken pot was used to represent the traditional Seder plate. There was no roasted shank bone, no egg, no charoset, no maror, only a boiled potato one of the Jewish prisoners had saved from lunch.

Heading the Seder, Michael began to sing the only Seder tune he knew, and tears of joy trickled down his cheeks. Mah Nishtana Halaila Hazeh Mikol Haleilot? "Why is this night different from all other nights?"

Michael knew why this night was different and he would remember this night for the rest of his life. At that moment, on the night of Passover, this group of wretched Jewish prisoners shivering in the dark around their symbolic Seder table felt like God had redeemed them and made them free men.

Passover, the festival of freedom, connects us to our yearnings for personal liberation from our self-imposed limitations. It reminds us that as a nation we have saved by God from our oppressors, time and time again. By celebrating the festival, we unite with the Jewish people not only in the present, but also in our past, creating a sense of unity and connection with Jews of all time.

Under Communist rule, Jews behind the Iron Curtain were forbidden to study, teach or practice their Judaism in any way. If they were caught, they were interrogated by the KGB and often thrown in prison for long terms on false charges or espionage, treason and illegal gatherings.

But no one can extinguish the spark in each Jew. The Communist Regime tried to strip the Jew of his Jewish identity, but it had the opposite effect. Jews behind the Iron Curtain were willing to risk their lives in order to learn and practice Jewish tradition.

On the night of Passover, as the Jewish inmates of the Siberian camp ate their matzah, they experienced a moment of true inner freedom. Clinging to a ritual practiced by Jews for more than 3,000 years fuelled their inner flame to survive their ordeal in a Jewish way, to feel connected to the Jewish people, and to believe that God would save them.

Models of the 'Four Sons'

10 Ways to Gamify Your Passover Seder
Blocked Goals and Anger
Why the Mezuzah is Placed on a Slant
Faith: the Axis Upon Which the Wheel of Science Turns
Comments
MOST POPULAR IN Passover
Our privacy policy