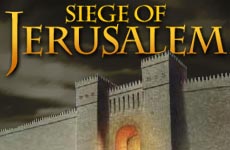 The Tenth of Tevet marks Nebuchadnezzar's siege of Jerusalem 2,500 years ago. What is the message for us today?

In Jewish consciousness, a fast day is a time of reckoning, a time to correct a previous mistake. What happened on the Tenth of Tevet that we have to correct?

On the Tenth of Tevet, 2,500 years ago, Nebuchadnezzar began his siege of Jerusalem. Actually, there was little damage on that first day and no Jews were killed. So why is this day so tragic? Because the siege was a message, to get the Jewish people to wake up and fix their problems. They failed, and the siege led to the destruction of the King Solomon's Temple.

Today we are also under siege. Much of the Jewish world is ignorant of our precious heritage. Children whose Jewish education ended at age 13 now carry that perception through adulthood. The results are catastrophic: assimilation in the diaspora, and a blurring of our national goals in Israel.

The siege was a message to the Jewish people to wake up and fix their problems.

So what's the message for us? Wake up and understand. What does the Almighty want? If there's a siege, hear the message now. Don't wait for the destruction.

If the Jewish problem today is a lack of appreciation of our heritage, then the solution is clear: increased love of Torah, love of Jews, and love of Israel and Jerusalem. The Almighty is telling us: The siege will not be lifted until you correct the mistake.

The Talmud speaks about two sages concerned over the threat of Torah being forgotten by the Jewish people. As a precaution, Rav Chiyah captured a deer, slaughtered it, and gave the meat to orphans. Then he tanned the hides and wrote five separate scrolls, one for each of the Five Books of Moses. He took five children, and taught each of them one book. He then took six more children, and taught each of them one of the six orders of Mishnah, the oral law.

Then he told each of the 11 children: Teach what you've learned to each other. With this, the Talmud says, Rav Chiyah ensured that the Torah would never be forgotten by the Jewish people.

This raises a question: 11 children is a pretty small class. Why didn't Rav Chiyah simply teach all the children all the books? Why did he teach each child only one book?

The answer is that the children having to teach each other was essential to the process. To ensure that Torah should not be forgotten, you have to teach what you've learned to others. That's the secret. You've got an obligation to your fellow Jews. If you know something -- teach it.

To ensure that Torah is not forgotten, teach what you've learned to others.

Realize that the most destructive, painful, contagious disease of all is ignorance. Ignorance leads to wasted lives and untold suffering.

So if you know the key to happiness, teach it. Do you see human beings walking around depressed, half dead? Give them some joy. If you have the ability, you must help. Otherwise you'll always bear the knowledge of what you "could have done."

This is not about "forcing your opinion" on others. No. A good teacher conveys information that allows the student to get in touch with what he already knows -- and re-discover it on his own. Get others to see and understand it on their own terms.

Don't sell yourself short. You have the ability to make a dramatic impact on others. You don't have to be a U.S. Senator to make a difference. With one piece of wisdom you can help humanity.

The director of Aish HaTorah's Russian Program is Rabbi Eliyahu Essas, a former refusenik from the Soviet Union. He lived there at a time when it was totally illegal to study Torah. Consequently, Rabbi Essas had nobody to teach him, and at the time, he didn't know how to even read Aleph-Bet. So he got a hold of some underground books, hid out from the KGB, and began to teach himself Torah.

After awhile, word got out and people started coming to study in secret with Rabbi Essas. As one of a few of the 5 million Soviet Jews teaching Torah, his time was in great demand. That's why Rabbi Essas made a rule: "Before I begin teaching you, you must agree to teach over what you've learned to others." In this way, Rabbi Essas was able to multiply his effect.

Before I teach you, you must agree to teach over what you've learned to others.

Although we don't live under an oppressive Soviet regime, the same concept applies. You learned something precious? Say to yourself: "That was fascinating. How did it change me? What did it teach me about living? Now how can I transfer this insight to others?"

Don't forget: Teaching benefits you as well. Until you share an idea, it's not yours. It remains but a hazy notion in your imagination. Having to explain an idea to others forces you to clarify it for yourself. You've taken it out of potential and made it a reality.

When you teach someone, make sure they understand how important it is to teach it over to someone else. If they do, then that's part of your success as a teacher. That's ensuring that Torah would never be forgotten by the Jewish people.

There's one more lesson to be learned from the story of Rav Chiyah. By teaching the 11 children only one book each, these children knew they had to learn from one another. The Jewish people are one and we're all in this together. Every person is worthy of profound respect, regardless of their beliefs and level of observance, and there is something to be learned from everyone.

We live in serious times. Whether it's assimilation in America, anti-Semitism in Europe, rampaging jihadists, or denial of the Jewish connection to Jerusalem, the message is essentially the same: The siege is on and the clock is ticking. We have to communicate the Torah message to our people. It is a matter of utmost national urgency.

We who believe in the power of Torah and the eternal mission of the Jewish people are required to act.

Who is responsible? We who believe in the power of Torah and the eternal mission of the Jewish people are required to act. To teach wisdom and be a "Light Unto the Nations."

On the Tenth of Tevet, when Nebuchadnezzar surrounded the city of Jerusalem, we failed to get the message. Will we get the message now? Will we change? Will we wake up to reality?

We've got to care. If we don't make the effort, we don't care enough. We have powers. Are we going to use them?

Get the message. Before the destruction. Now is the time.

What is the Real Significance of the Temple in Jerusalem?