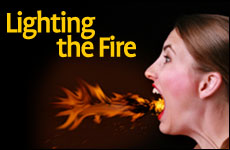 That day in the doctor's office, I lit a match and threw it onto the Holy Temple.

I destroyed the Temple in Jerusalem. It was I, a simple housewife, in the 21st century, who destroyed the Holy Temple, robbing the world of its prime source of light and connection with God.

It happened very quickly, and not dramatically at all. I was chatting with the secretary at our family doctor's office. We were laughing about the fact that my cousin, who brings her children to the same doctor, always misses her appointments.

"Yes," I joked, "She probably would have missed her own wedding if we all hadn't made sure to get her there!"

And with those seemingly naïve words, I sang out a cheery goodbye and was on my way home.

Something didn't feel right. The words that had just flown from my mouth had grown wings and were circling in my head. I heard my own voice repeat the statement over and over, and with each repetition my stomach muscles grew tighter. I was not just bothered by whether or not my accusation was true, but something more existential. I had spoken Lashon Hara, negative speech about another person that according to Jewish law is forbidden, even if true.

The Talmud says that the Temple was destroyed 2,000 years ago because of sinat chinam, translated as baseless hatred. Was my casual remark at the doctor's office really similar to what caused the Jewish exile? Yes, such words breed negativity and further distance humanity from our goal of unity and tolerance.

Recently, my infant daughter and son were playing together in the bath. Suddenly, for no obvious reason, my daughter began hitting her brother on the head with a toy shovel. His eyes desperate for help and rivers streaming down his face, this poor child was trapped in the bathtub. Of course, I told her to stop and removed her hand from above his head, but she continued. I was shocked and angry. This was intolerable, and she would be separated from her brother until she could learn to behave properly with him.

And then it became clear. This is why the Temple was destroyed. Because when we hurt each other, either physically or with words, our Father in Heaven finds it unacceptable. We have been exiled until we can learn to live in harmony with our brothers and sisters.

Not long after this occurrence, my daughter came out of preschool with a bag of arts and crafts projects. Through the clear packaging, I could see a tiny "Torah scroll" creatively made by her teacher. It was constructed of two candies joined together to resemble a scroll. The whole way home, my daughter whined and begged to open her candy. I tried to stall her till after a healthy lunch, telling her about the freshly cooked chicken and rice that awaited her at home.

"In any generation that the Temple is not rebuilt, that generation is held responsible as if they destroyed it."

Arriving home, my determined daughter whimpered as she tore open the cellophane bag to find her candy. As she studied it up close for the first time, she realized that she held not one, but two candies. Her frown was instantaneously transformed into an enormous smile as she shouted, "Mommy, There are two candies here! One for me and one for my brother!"

My heart sang. Ambitions for a healthy lunch vanished as I reached to open the candies for the generous child and her brother.

And how do we act? Do we share with others? Do we try to judge others favorably? Are we sympathetic to the plight of people under rocket fire in Israel or starving in Sudan?

Our Sages said, "In any generation that the Temple is not rebuilt, that generation is held responsible as if they destroyed it."

This teaches us that we have the power to change the pattern that exiled us and create one of love. Although 2,000 years have passed, God has not given up on us. Rather, he expects each one of us to be the one to make amends, to build His home from bricks of kindness and sympathy.

The 10th of Tevet is one of the fast days in the Jewish year that are designated for pondering the destruction of the Temple. Rabbi Eliyahu Kitov describes the goal of these fast days: "The suffering and mourning is not the main point of the fast, for the suffering that took place on the original days were enough! Rather, the idea of the fast is to arouse the heart, to open the pathway for returning..."

Fire has the capacity to either destroy or to warm. That day in the doctor's office, I lit a match and threw it onto the Holy Temple. Now it is time to light a different fire: of compassion and caring, of building and repair.

Carrying the Torch: The Menorah and the Eternal Jewish People
Is Grease the Word?
Dried Fruit Compote
Scientific Curiosity and the Divine Encounter
Comments
MOST POPULAR IN Israel
Our privacy policy
Aish.com Is Looking for Great Writers