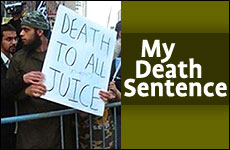 It never occurred to me that my family and I would be sentenced to death again for the crime of being born Jewish.

This was the law of the lands where the swastika banner flew proudly. The 1000-year Reich lasted just 12 years; then the lights went on again all over Europe for a brighter, happier, productive future for those who had lived through it.

I was just 14-years old. I had memories but, more importantly, I had hope. I had hope that what I had lived through would not be repeated, that I would live a normal life like everybody else -- Jew and non-Jew, that I would acquire knowledge I could pass on to others -- including, I hoped, my children and their children, that I could do something that might make my world -- and everyone else's -- a better place to live in.

My hopes became reality after I came to America at the age of 18. I graduated college, got a job, bought a house, fathered children, made friends, became involved in humanitarian causes, and loved and appreciated the wonderful country that gave me the opportunity -- and the inalienable right -- to pursue happiness.

It had never occurred to me that there might come a time when I and my family might be sentenced to death once again for the crime of being born Jewish. It never crossed my mind that the world would once again be hearing the shouts of "Kill the Jews" and "Jews to the ovens!" I realized that there were some who hated Jews but I was sure that this was a tiny, mindless, insignificant minority -- surely smaller in numbers than those who believed the Earth was flat or that Elvis was alive.

Hatred is with us again. The legions of haters are proudly waving their flags and flaunting their slogans around the globe. And just like the Nazis of 70 years ago, they are not bashful or apologetic in disseminating the ideology of mass murder. They are dedicated, enthusiastic, committed, and ready to die for their deadly doctrine. One of their religious leaders put it best: "We love death as much as the Jews and Christians love life!" 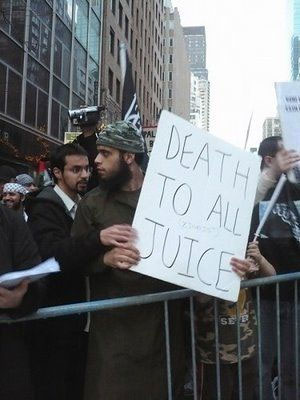 A less literate, young man at a New York demonstration was even more frightening by waving a misspelled placard that demanded, "Death to All Juice!" The photo brings a smile to most that see it on the internet but it isn't funny. We know that he doesn't want to kill orange juice -- he wants to kill me, my children and grandchildren and all those other "juice".

In Fort Lauderdale, on December 30, hundreds of anti-Israel demonstrators protested the Israeli military operation in Gaza. Their hatred encompassed all Jews – "Go Back to the Ovens! You Need a Big Oven" and "Kill All Jews!" (this time spelled correctly), read their placards.

Pamphlets in Denmark demand, "Kill Israel's People", and on the reverse, less correctly, "Kill Jewish People Evry Where in Ther World". In Mumbai, a city with very few Jews, the Islamic terrorists went to the trouble to find a tiny, unmarked Chabad facility to slaughter the 6 Jews there. In Britain the police are unable to guarantee security for Jewish schools. In Amsterdam, in January, a crowd at a rally chanted "Hamas! Hamas! Jews to the Gas!" In Belgium, pro-Hamas demonstrators burned a public menorah and painted swastikas on Jewish-owned shops. In Berlin, the police chief warned Jews not to wear skull caps in public and avoid "acting Jewish." In France, a burning car was rammed into a Toulouse synagogue. In southern Sweden a Molotov cocktail was thrown into a synagogue. And there is more, everywhere...

The hatred is not hiding. On the official Hamas website, on 12/31/08, there were calls for attacking Jews throughout the world, "...a Jewish adolescent boy in an Australian synagogue, a Jewish minister in the Georgian government, a Jewish businessman in the New York Stock Exchange, an illiterate Jew from Ethiopia...they all belong to the same gang and the same nation..." And Al-Qaeda's Ayman al-Zawahiri demanded that Jews be attacked worldwide, "...everywhere you can reach them. Support your mujahedeen brothers and children against them."

The British online forum "Ummah" asks, "Have we got a list of top Jews we can target? Can someone post names and addresses?" And, in response, "Saladin1970" gives a link to 100 top British Jews.

There are those who believe that this isn't anti-Semitism -- just anti-Zionism. Here is a quote from a great and wise man: "When people criticize Zionists they mean Jews. You are talking anti-Semitism" (Martin Luther King, 1968).

Si Frumkin, a Holocaust survivor and longtime Jewish activist, now devotes his time to public service, lecturing, writing, and whatever else has to be done. Visit his site at http://www.sifrumkin.com/index.htm