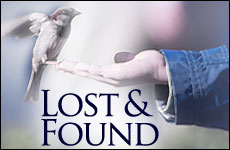 If I don't give up hope of finding something, it still belongs to me.

"How many children do you have?" is a horrible question for those who of us
who have lost a child. Rosa, a bereaved mother tells me that her
psychologist insisted that she has four children, when she said she had five. "But
Shalom no longer lives with you," her psychologist said.

"Well, neither will your children when they get older."

Her therapist told her that she was refusing to face the reality of her
loss. But the psychologist, I believe, is wrong.

It's true that Rosa and I have lost children. How benign the expression
lost. As if we had merely gone shopping and the child had scurried off to
the next aisle and we couldn't find them in the maze of twists and turns.

At first I was perplexed and a bit angry at that word. But now I realize
that the word lost carries a meaning that I didn't at first understand.
There is something very accurate and resonant about the term losing a child.

Jewish law teaches us something important about loss: each object has its
place in the world, and when something is lost, and we find it, it is our
obligation to return it. In Jerusalem, there was a place in the Temple
for returning lost objects called the stone of losses. "Whoever found an
object went there and whoever lost one did the same. The finder stood and
proclaimed, and the other called out the identifying marks and received it
back." (Baba Metzia 28b)

Our loved ones are not present physically but we are still connected to their souls.

But there is an intriguing stipulation to the laws of lost and found. Once
the owner gives up hope of finding the object, there is no obligation to
restore the object to the owner. And the converse is true as well.

In this way, ownership isn't just physical but also emotional. If I don't
give up hope of finding something, it still belongs to me. Its place is
still with me. The law tells us this: What we lose may not be returned -- but
as long as we don't give up hope, it still belongs to us. It's not that I
think Koby will return. Yet no parent ever separates from his child. It's
also hard for a widow or widower to be asked if they're married: Our
children and wives and husbands still belong to us. We don't give them up.
That's why it's so hard for a bereaved parent to answer the question: How
many children do you have?

We live with them and without them, at the same time. Our identity, our
place in this world, is disturbed; we live in this world and in the world of
memory and longing.

But we also live in the world of eternity, because the lost part of
ourselves lives there now. That longing creates a reality. Our loved ones
are not present physically but we are still connected to their souls.

It's true that the dead do not return. As King David said, "I shall go to
him, but he will never come back to me (Samuel 2, 12:22-23)." But there is
still a connection that is essential and potent. That is why there is no
sense of closure. Because closure would mean that we had given up hope of
being connected to them. I can't answer four children and I can't answer three.
Both are true and neither are true. I live in a world that is beyond the
arithmetic that is offered me in this world. I live in a world beyond
counting.

This article originally appeared in the Baltimore Jewish Times.

Closer to the End

Anorexia and My Need for Perfection